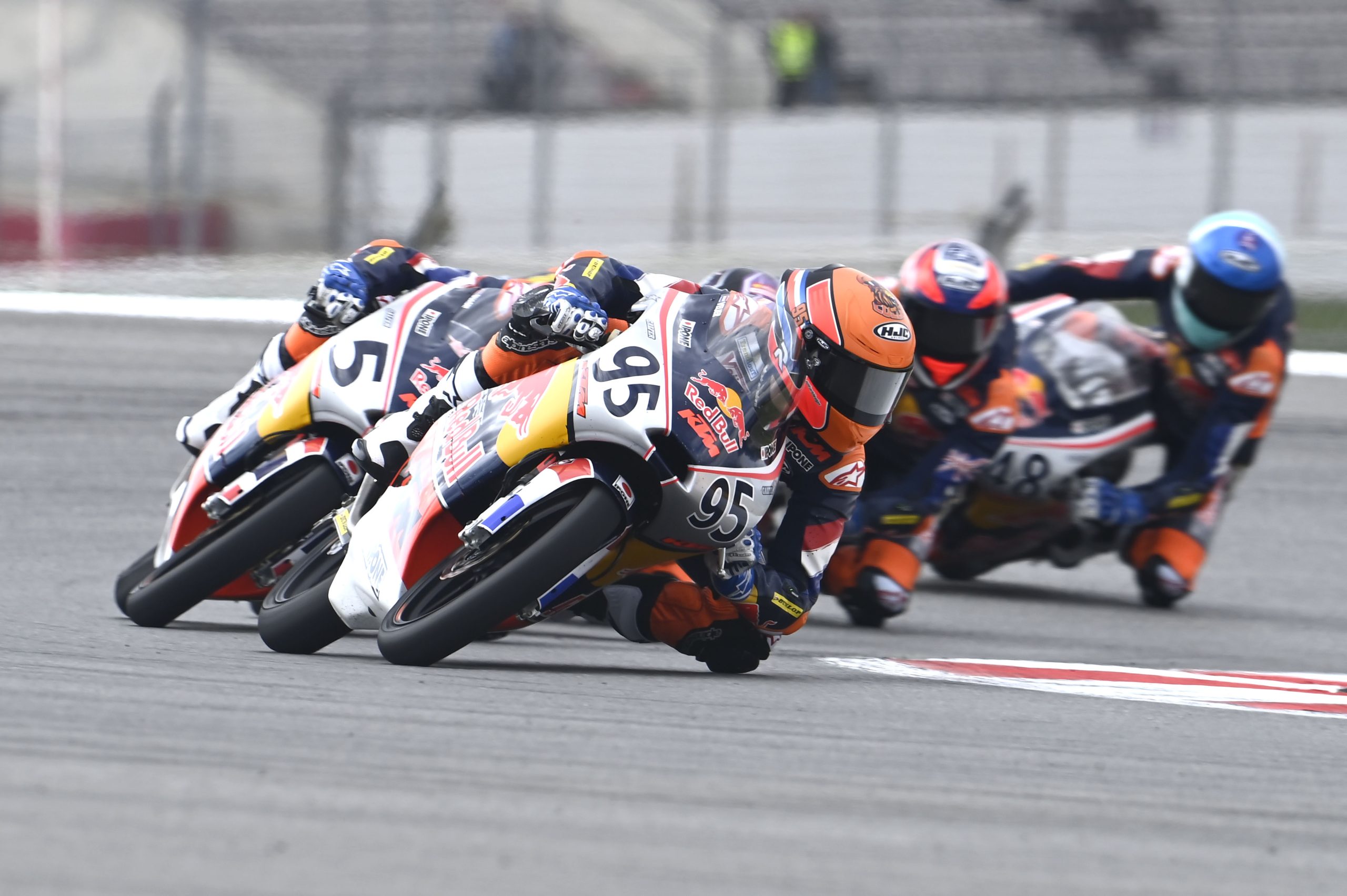 Intense action from first lap to last saw Dutch 17-year-old Collin Veijer win a thrilling 16 lap Red Bull MotoGP Rookies Cup race at Portimão. Saturday’s winner José Rueda crossed the line first but the 16-year-old Spaniard had exceeded track limits at the final turn and was therefore docked a place.
Casey O’Gorman added 3rd to his 2nd from the day before and the 14-year-old Irishman only lost the win by 0.004 seconds.
The 7 KTM RC 250 R battle for the lead left 15-year-old Australian Harrison Voight a little frustrated with 4th again and Rico Salmela, the diminutive 14-year-old Fin put in a storming ride to take 5th ahead of Tatchakorn Buasri, the 21-year-old Thai who did a good bit of the leading. Gabin Planques, the 17-year-old Frenchman completed the lead pack.

“I didn’t see him actually going on the green but I saw he was quite on the limit. Out of the last corner Casey passed me a little bit and then I got José’s slipstream and got back ahead of him.”
“I didn’t know I had won but I could see that the big screen was showing me riding around and I wondered,” he laughed. “I’m so happy for this.”
“My bike had a broken clutch before the start and I had to use the spare bike. The front felt a bit different and I couldn’t brake as hard or as late as I would on my bike so I had to compensate.”
“All race I knew I had to stay at the front and not let José get away like he did yesterday and finally I won.”

“I’m very happy to be on the podium again. I pushed really hard on the last lap to try and get a gap. I knew I was on the edge of the track but I thought I had managed to stay off the green. That’s a shame but that is how it is and I am happy to be leading the championship.”
“It was a harder race than yesterday, I couldn’t get away. The bike was handling well I loved riding it, it just didn’t seem quite as quick, I couldn’t break away.”
“Still it was a very good race, a lot of close battles and I am happy to be on the podium again.”

“It’s my first time here and I was expecting to do OK but 2 podiums is amazing. This race was so much harder than yesterday, the group was bigger and we were fighting for first, yesterday we weren’t. That made it more valuable.”
“On the last corner I got Collin back and then he got me again just before the line but it was good. The bike was great again, I really enjoyed it.”

“Not really happy with that. I wanted the the podium. I pushed so hard and it was a clean race until the last two laps and I didn’t like those so much. Every time I saw 99 go to the front I knew I had to go with him.”
And that 4th to 1st move. “I don’t know I was just going for it. It was a good race.”

“Today I am a little bit happy and a little bit sad. I was having a good race but in the last few laps I just made too many mistakes, trying too hard and so I wasn’t on the podium.”