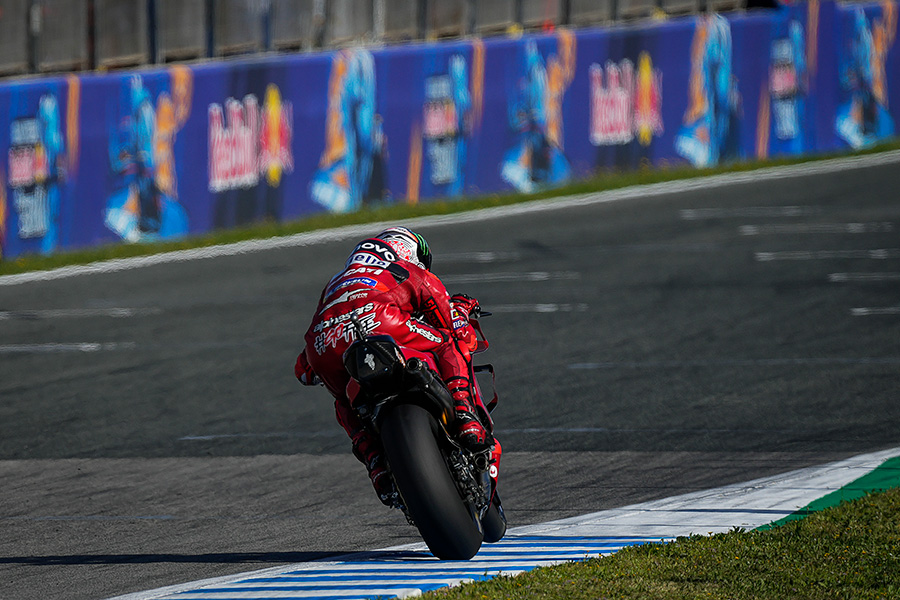 What. A. Lap. History has been made at the Circuito de Jerez-Angel Nieto after Francesco Bagnaia (Ducati Lenovo Team) set a new all-time lap record of 1:36.170, an incredible near half second clear of his main competition, aka reigning Champion Fabio Quartararo (Monster Energy Yamaha MotoGP™). The Italian denied the number 20 a fifth straight pole position in Andalucia, with a late charge from Aprilia Racing’s Aleix Espargaro enough to see him snatch third and another front row.

Q1
There were plenty of disgruntled faces at the conclusion of Q1, most notably from the man tied on points at the top of the World Championship: Team Suzuki Ecstar’s Alex Rins could only manage 14th on the grid and will be desperately hoping he can conjure up some first lap magic again on Sunday. Repsol Honda Team’s Pol Espargaro missed out on a Q2 place right at the end following a late lap from Johann Zarco (Pramac Racing), and KTM had a day to forget as well with their factory stars Brad Binder and Miguel Oliveira struggling down in 15th and 21st.

Zarco topped the session, with rookie Marco Bezzecchi (Mooney VR46 Racing Team) once more an impressive nuisance for the veterans on Saturday.

Q2
Before the first flying laps had even come in we saw drama in Q2 when Pramac Racing’s Jorge Martin crashed out at the first corner. A slight bobble saw him crash out and sprint back for his second bike, but the fall had consequences as it forced the cancellation of the majority of laps thanks to the Yellow Flags, meaning Joan Mir’s (Team Suzuki Ecstar) 1:37.616 was the fastest of the five riders whose laptimes still stood.

On the second flying laps, a familiar usual duo were down to business and at it again. Bagnaia took top spot for a split second before Quartararo back took over with a 1:36.790. The pair asserted their dominance early too, sitting four tenths clear of Aleix Espargaro.

Bagnaia had company for his first run as Repsol Honda’s Marc Marquez latched himself onto the rear of his GP22, but the number 63’s crew got the Italian back out in rapid time, and he was able to shake off the close attention of Marquez. The eight-time World Champion then switched his focus to Quartararo instead, gluing himself to the rear wheel of the reigning World Champion’s Yamaha M1.

History was then made as Bagnaia smashed everyone out of the park with a sensational 1:36.170, a jaw-dropping six tenths clear of Quartararo, as hopes of a fifth straight Jerez pole began slipping through his fingers. The Frenchman improved his laptime but was still four tenths adrift of the brilliant Bagnaia, whose first pole since the Algarve GP last year was an arguably perfect and unbeatable lap.

With the chequered flag out, Aleix Espargaro was able to dig deep to grab the final front row spot out of the hands of Jack Miller (Ducati Lenovo Team) too, the Aprilia rider making it a third top three performance in the last four rounds.

The Grid
Bagnaia back to his best and Quartararo denied, looking for some revenge, sets an incredible stage for Sunday. Aleix Espargaro starts alongside them on the front row, and he has Marquez, Miller and Johann Zarco (Pramac Racing) on Row 2 just behind him.

Fronting the third row of the grid will be Takaaki Nakagami (LCR Honda Idemitsu), ahead of the impressive rookie Marco Bezzecchi (Mooney VR46 Racing), who backed up his second row start last weekend with another sizzling Saturday performance. The final spot on the third row will be occupied by Mir after a late crash in Q2 cost him dear, with the same going for Martin. The Spaniard, usually a Q2 master, rounds out the top ten.

Similar disappointment is there for Enea Bastianini too. A crash for the Gresini rider on his final flying lap meant he has to settle for 11th on the grid, ahead of Maverick Viñales (Aprilia Racing) in 12th.

Q1
There were a few surprise names looking for a way through Q1, including Indonesia winner Somkiat Chantra (Idemitsu Honda Team Asia), who did top the session, and Portugal podium finisher Jorge Navarro (Flexbox HP 40) in second. The other two moving through were Albert Arenas (Autosolar GASGAS Aspar Team) and Bo Bendsneyder (Pertamina Mandalika SAG Team)… leaving Cameron Beaubier (American Racing) out of Q2 a week on from his front row start on the Algarve.

Q2
Arbolino and Lowes were among the quickest throughout Q2, and the former moved into provisional pole position with a 1:41.299 at the halfway mark. His British teammate set a 1:41.321 just moments later, giving Marc VDS a one-two at the time, before Ogura struck.

The Japanese rider, who is second in the World Championship and just two points ahead of Arbolino, then set a 1:41.289 to put himself 0.010s clear of the Italian and 0.032s ahead of Lowes. From thereon out, the front row was decided.

The Grid
Behind the Ogura, Arbolino, Lowes triple threat,  Flexbox HP40’s Aron Canet pulled off an impressive Saturday. Only six days after breaking his left radius bone in the multi-rider crash in Portugal, he was also in the fight for pole position in Spain. Canet’s 1:41.369 had him fastest until Arbolino took over, and is good enough for fourth on the starting grid in the end.

Jake Dixon (Autosolar GASGAS Aspar Team) was fastest in all three Free Practice sessions but the Briton crashed as he chased an improvement in the final two minutes of Q2, set to start 11th.

It’s a dream Saturday for the Gaviota GASGAS Aspar Team as Izan Guevara and Sergio Garcia clinched pole position and second on the grid at the Gran Premio Red Bull de España in the first ever GASGAS 1-2. The number 28 jumped ahead of his teammate in the closing stages of Q2 for only a second career pole position, with Garcia was forced to settle for second and Red Bull KTM Ajo’s Jaume Masia leaving it late to take the final front row spot.

Q1
Kaito Toba (CIP Green Power) headed through on top ahead of British rookie Scot Ogden (VisionTrack Racing Team), with the two split by just 0.064. A little further back, Matteo Bertelle (QJMotor Avintia Racing Team) was third quickest ahead of the final rider to move through, sophomore Xavier Artigas (CFMoto PrüstelGP) as he pipped Daniel Holgado.

Q2
At the end of the opening flying laps, it was Garcia who held provisional pole thanks to his 1:46.004. The Spaniard had a three tenth advantage with five minutes left on the clock, with Ayumu Sasaki (Sterilgarda Husqvarna Max Racing) and Riccardo Rossi (SIC58 Squadra Corse) sitting in the early front row spots. It would then change at the top though, when Guevara, whilst riding alone, posted a 1:45.880. The number 28 managed that despite a moment on the exit of Turn 9, as the rear kicked out of line just as he applied the gas.

Deniz Öncü (Red Bull KTM Tech2) then dived up to third behind the GASGAS duo, and the chequered flag came out with one man looking like challenging Guevara and Garcia: Xavi Artigas (CFMoto PrüstelGP). The Q1 graduate was on course for pole halfway around his final lap before a mistake through sector three ended his pole hopes, eventually improving to sixth.

The final spot on the front row was far from settled, though, with both Dennis Foggia (Leopard Racing) and Masia improving late on. Foggia crossed the line first and bumped Öncü off the front row, only for Masia to then steal third away from the Italian for a first row start of the season. That confirmed Guevara’s second pole position of 2022 and Garcia, the Championship leader, in second.

The Grid
Behind the GASGAS duo and Masia front row, Foggia, Öncü and Artigas will pose a threat from row two no doubt, with some serious challengers all packed together. Row three of the grid was supposed to see early Q2 challenger Sasaki at the head, but the Japanese rider has been given a back of the grid start for irresponsible riding in FP3, as well as a Long Lap penalty for the race. So it’ll now be Rossi ahead of the fastest man from FP3 on Saturday morning Diogo Moreira (MT Helmets – MSI).

Carlos Tatay would have been next up on his CFMoto PrüstelGP machine, but he will also start from the back of the grid and do a Long Lap, so Q1 graduate Ogden moves up along with Ryusei Yamanaka (MT Helmets – MSI). Rivacold Snipers’ Andrea Migno is next up, looking for more on race day.

#SpanishGP
Get All Our Latest News Sent Direct To Your Inbox
Join 30,242 other subscribers.
Follow on Social Media
Get the VROOM Podcast