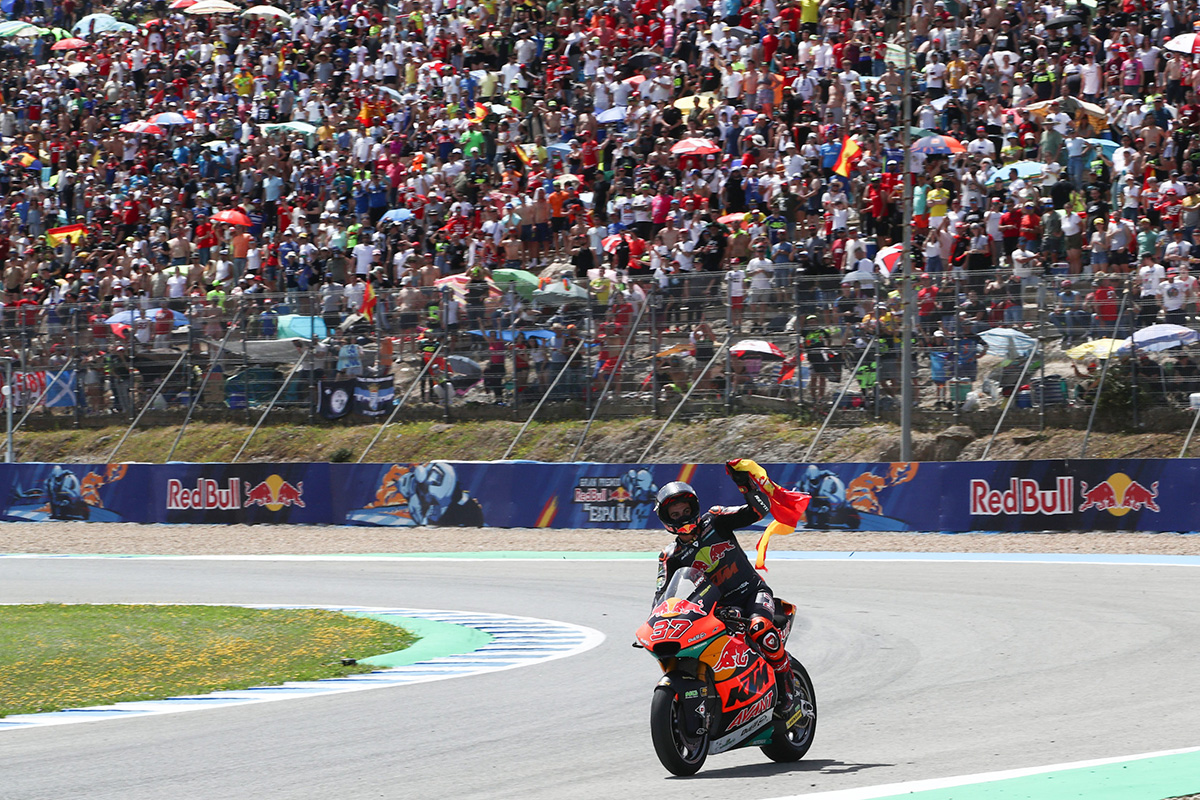 The Jerez-Angel Nieto Circuit hosted the Spanish Grand Prix on Sunday, presenting a tough and intense test for the Moto2 World Championship riders due to the heat. Despite the high temperatures, Augusto Fernandez worked hard to achieve a praiseworthy fourth place. Pedro Acosta was one of the most competitive riders, despite suffering a crash at the start that made him lose several positions, and he finished in 20th place.

Fernandez, who started from the third row of the grid, got off the line well and gained a place at the opening corner, moving up into eighth. The Red Bull KTM Ajo talent pushed to the fullest, beginning a fightback that saw him reach fourth on Lap 8. The Spaniard gave his all to try to catch up with the riders ahead of him in search of a podium spot, setting the same times as the leader. Finally, Fernandez crossed the finish line in fourth place, completing a hard-fought race.

Acosta started well from tenth on the grid, holding his position on the opening lap. Unfortunately, the Red Bull KTM Ajo rider crashed at Turn 6 on Lap 2 after colliding with another competitor. Able to re-join the race, he climbed places to finish 20th. Acosta showed great pace, riding in times matching the leaders and managing to recover a deficit of more than 20 seconds throughout the contest.

Fernandez occupies 9th position in the Moto2 World Championship with 44 points. Acosta is 15th with 20. The next event of the season will be the French Grand Prix, which will take place from May 12th to 15th at Le Mans.

#37 AUGUSTO FERNANDEZ
“I am happy to have had a race with the leading group, after some difficult past races. It was a shame about qualifying, since we started far back -and at this circuit it is difficult to overtake. By the time I was able to get out of the traffic, the three riders who finished on the podium were already far away. From then on I was riding at the same pace as them, but I couldn’t catch them. The conditions were difficult due to the heat and the track didn’t allow us to make any mistakes. I tried to stay consistent and set the same times, but I couldn’t get there. At the end of the race it seemed that I could get into the fight for third place, but it wasn’t to be. I’m happy with the weekend and at Le Mans we’ll aim for more.”

#51 PEDRO ACOSTA
“Today was a day in which we had to get a good result. The weekend has been one of the best we have had, because we were always at the top. From the start we were climbing up the order little by little, but the crash meant that we could not be among the front-runners. The pace we had was enough to be in the top positions and we have already taken the first step to be up there. At Le Mans we will try again.”