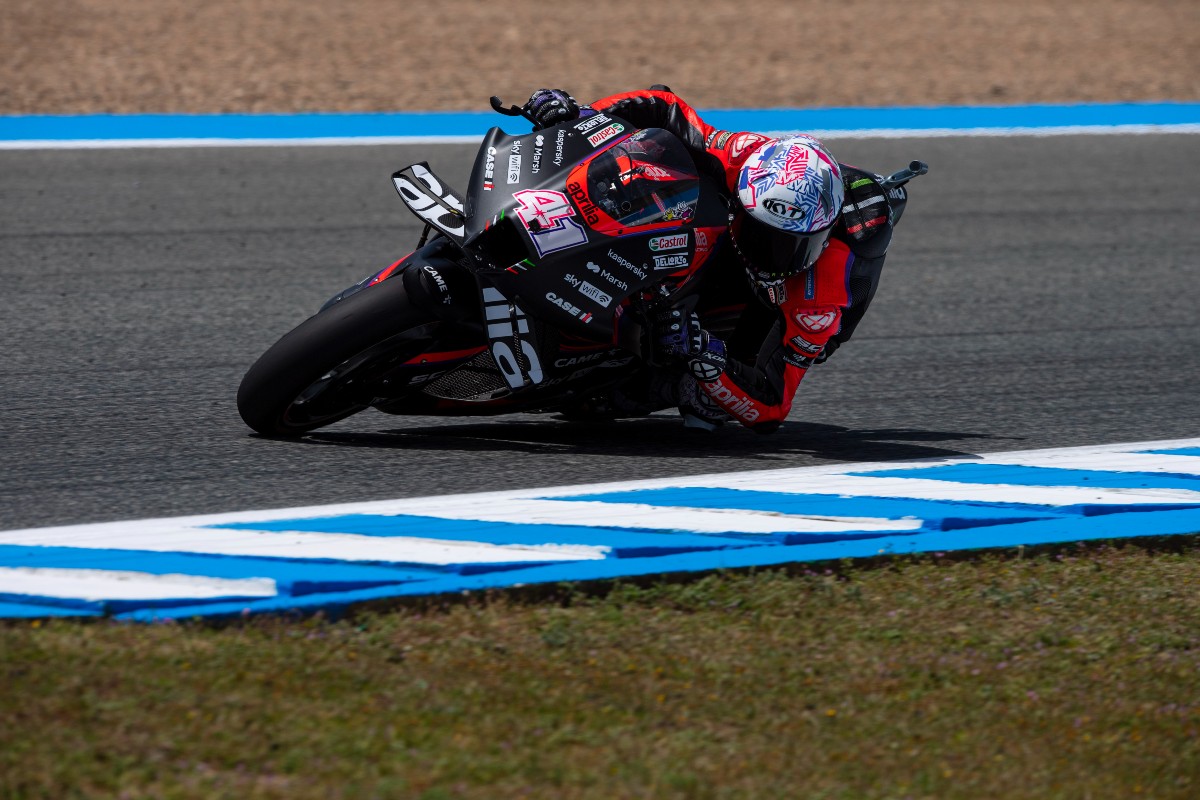 Just one week after the third place he earned at the Portuguese GP in Portimão, Aleix Espargaró and the 2022 Aprilia RS-GP were once again back on the third step of the podium for the Spanish GP in Jerez de la Frontera. In front of his home crowd, Aleix put in another extremely solid performance, enhanced by a gorgeous double pass against Jack Miller and Marc Márquez in the race finale, thereby making up for a rather unhappy start from the front row which had relegated him to fifth.

Thanks to this second consecutive podium, his third of the season after winning in Argentina, Aleix Espargaró is now second in the overall standings with 82 points, 7 behind the leader, Fabio Quartararo.

For Maverick Viñales, on the other hand, the race was an uphill battle. Solid in practice, but penalised by less than brilliant qualifiers which placed him on the fourth row of the starting grid, Aprilia Racing’s “Top Gun” lost more positions due to a problem at the start, finishing the race in 14th place with a good comeback ride.

Lorenzo Savadori’s fundamental work continued in the race. In his second wild card of the season, the Aprilia Racing test rider finished the race astride his RS-GP, on which he is testing some new components, in 21st place.

What we are doing is incredible! I knew I didn’t have the same pace as Bagnaia and Quartararo, but with a better start I would have been able to follow them. Instead, I found myself behind Márquez and Miller and, even though I was a bit faster, overtaking them was not easy. I knew that sooner or later they would make some small mistake. It was a long race, so I waited. I took good advantage of the opportunity because when it happened I managed to get past Márquez too, who had also made a small mistake. Once I was ahead of them, I was able to be extremely fast, with times in the low 1’38” range for the final laps, but by then it was too late to catch the first two. It probably wouldn’t have been enough to win, but it’s a great pace at the end of the race! The bike worked fantastically. We just need to improve the start which is still somewhat of our weak point. I’m extremely happy. I’m just 7 points behind Quartararo who is leading the championship. It’s like living in a dream. Plus, it’s great to have finished on the podium at this circuit which I really like a lot and with such a big crowd. I’ll never forget the emotions I felt on the honour lap.

At the start, the front fork locking device didn’t engage, so the front end of the bike lifted a lot and I lost several positions. But these things can happen and I don’t want to make excuses. Being unable to be fast on the flying lap during qualifying penalised us and that complicates things in the race because when you start from behind, you’re forced to push hard straight away, so the tyres heat up and your pace suffers. Our bike is working well but we’ll try some different changes to the settings in the tests tomorrow to improve my feeling in qualifying conditions too. There is still work to be done, but we won’t give up!

I’m rather pleased with my race. I had a problem at the race start that caused me to lose ground, but we know that can happen with a ‘laboratory’ bike. These tests are part of my role and it was important to be able to conduct them in the race. I’m extremely happy for Aprilia and for Aleix, who is doing really well. We’re all working hard, but we certainly won’t stop here. We’ll continue testing other things tomorrow in the post-race tests.