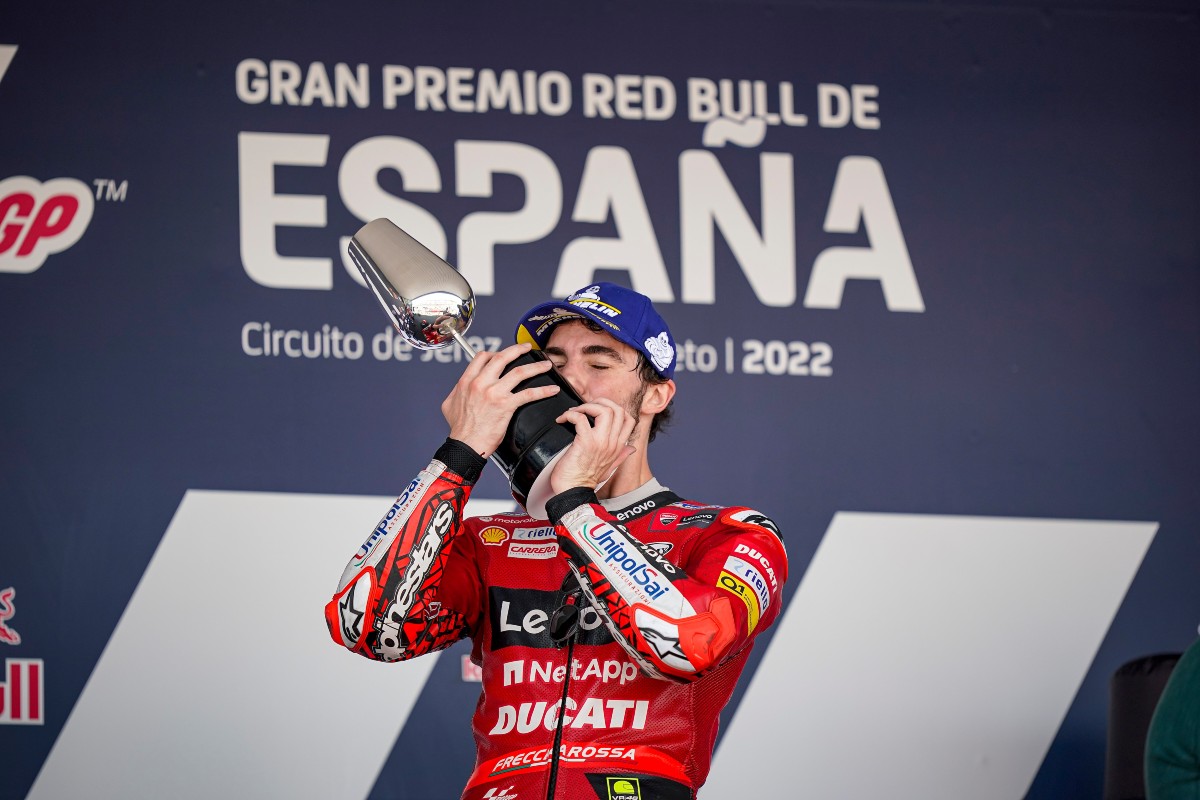 For the second year in a row, Ducati takes victory at the Circuito de Jerez – Angel Nieto, stage today of the Spanish GP, the sixth round of the 2022 MotoGP World Championship. After Jack Miller’s victory last year, this time, it was Francesco Bagnaia (second in 2021) who took the Desmosedici GP to the top step of the podium, proving to be the absolute dominator of the Andalusian weekend.

The Ducati Lenovo Team rider took a record-breaking pole position yesterday, and in today’s GP, he imposed himself again, taking the lead at the first corner. Bagnaia was then able to maintain an incredible pace, managing the advantage over Fabio Quartararo until the finish line. It was Bagnaia’s fifth victory in MotoGP and his first in the premier class this year. Thanks to today’s result, the Italian rider moves up to fifth in the overall standings, which sees him 33 points behind leader Quartararo.

Jack Miller also had a good performance as he crossed the line fifth. After starting from 4th on the grid, the Australian rider immediately moved into third place, but towards the end of the race, he was overtaken first by Márquez and then by Aleix Espargaro. Miller then started a fierce duel with Márquez for fourth place, in which the Spaniard got the better of him. After the Spanish GP, Jack is eleventh in the Championship, 47 points behind the leader, while Ducati still leads the constructors’ standings by 42 points.

I am moved. The first victory last year at Aragon was certainly very important, but today’s was even more beautiful and much more difficult. We come from a tough period in which, for various reasons, we have never been able to show our real potential, but here I knew that we were in the right conditions to do well. We have been working hard since Qatar, and finally, today, we arrived ready for the race. I pushed really hard and lapped consistently throughout the 25 laps. I’m proud of the work that has been done, not only with my team, which I thank but also at home with the Academy and my family!

Knowing you have Marc Marquez behind you for 22 laps is definitely not an easy situation to handle, but despite the pressure, I feel I rode well today! I was with Pecco and Quartararo during the first four laps, but then I couldn’t maintain the same pace. I gave it my all and tried to focus only on my race. Right from the start, I was having some issues keeping the right line at turn 5 and in the end, Marc passed me there. After Aleix passed both of us, Marc and I had a good battle on the last lap. I’m quite happy: we fought for the podium and obtained a positive result, and with today’s experience, we can only improve in the future. Congratulations to Pecco! He really did a great race.

Tomorrow, the MotoGP riders will remain at Jerez de la Frontera for a day of post-race collective testing, while the French GP will take place from 13th-15th May at Circuit Bugatti in Le Mans.