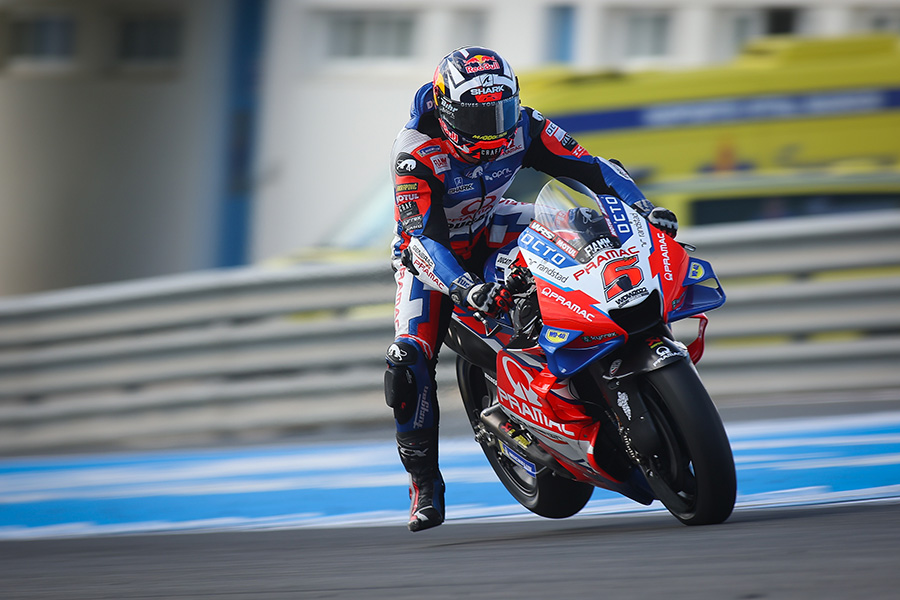 Johann Zarco (Pramac Racing) ended the Official MotoGP™ Jerez Test at the summit of the timesheets despite a crash, the Frenchman putting in a speedy 1:37.136. There was plenty of important running at the Circuito de Jerez-Angel Nieto on Monday, with Brad Binder (Red Bull KTM Factory Racing) and Fabio Quartararo (Monster Energy Yamaha MotoGP™) finishing inside the top three but the test about much more than the lap times.

Pacesetter Zarco lapped quicker than he did in Q2 to finish top of the pile by a tenth and a half, as the Frenchman pocketed 54 laps ahead of his upcoming home Grand Prix at Le Mans. Jack Miller (Ducati Lenovo Team) was the second fastest Ducati rider on track, the Australian was P4 and completed 53 laps.

KTM
Miguel Oliveira (Red Bull KTM Factory Racing) and Brad Binder both tested a radically new exhaust, while the Portuguese rider was also working on setup. Binder was testing some geometry and front fork settings and finished the test second, with Oliveira 21st after lapping 65 times.

Remy Gardner was the sole Tech3 KTM Factory Racing bike on track as Raul Fernandez recovers from the injury that saw him miss the Spanish GP. Gardner managed 44 laps but the Australian’s day ended with a crash at Turn 4, that resulted in him losing some skin off his left little finger and hurting his back. Thankfully there’s nothing broken.

YAMAHA
The big news coming from the Iwata camp during Monday’s test was Monster Energy Yamaha MotoGP™ Team Manager, Massimo Meregalli, confirming that Yamaha will have a new aero package at the Italian GP later this month.

Quartararo was one of the busier riders on track as the Frenchman completed 78 laps before calling it a day, ending the test third quickest. Franco Morbidelli (Monster Energy Yamaha MotoGP™) lapped 83 times, finishing P17, one place ahead of WithU Yamaha RNF MotoGP™ Team’s Andrea Dovizioso. Rookie Darryn Binder (WithU Yamaha RNF MotoGP™ Team) crashed unhurt at Turn 7 before midday and was able to get 54 valuable laps in the bank.

HONDA
Ahead of the Gran Premio Red Bull de España, Marc Marquez (Repsol Honda Team) explained that Honda’s test started in FP1 on Friday morning. All things considered, it was a fantastic weekend for the eight-time World Champion in Jerez, but the work continued on Monday. The number 93 was seen testing a 2021 aero package but was mainly focusing on setup, with three bikes on his side of the garage…

Fellow Repsol Honda Team rider Pol Espargaro was lapping on very used Michelin medium tyres in the opening few hours after saying on Sunday that they need to create an environment that has as little grip as possible. The Spaniard was playing with geometry and completed a whopping 85 laps, setting the fifth fastest time in the process.

It wasn’t the day Takaaki Nakagami (LCR Honda Idemitsu) would have been hoping for as he flew back to Barcelona early after a heavy crash at Turn 1. The Japanese rider is experiencing pain in his left knee ligaments – the same he damaged after the Indonesian GP – and although scans revealed no fractures, Nakagami will undergo further scans in Barcelona in a further check up. Alex Marquez (LCR Honda Castrol) suffered a mechanical problem towards the end of the day at Turn 1, but finished Monday’s test in P11 after lapping 80 times.

SUZUKI
Team Suzuki Ecstar duo Joan Mir and Alex Rins were testing suspension items and swingarms, comparing them to the ones they’ve already tested. Mir finished P6 on the timesheets with a 1:37.756, Rins was P8 and just 0.024s off his teammate’s time.

APRILIA
As their era without concessions begins, Aprilia Racing were working on suspension, electronics and swingarm settings with Spanish GP podium finisher Aleix Espargaro and teammate Maverick Viñales, both joined on track once again by Test Rider Lorenzo Savadori.

Viñales suffered a crash at Turn 7 before lunch and then had a mechanical issue on the run into Turn 1 in the afternoon session. Savadori also encountered a mechanical issue with one of his RS-GP machines, an incident that brought out the red flags briefly in the afternoon. Viñales got a further 59 laps under his belt to continue his growth on the RS-GP, however, while teammate Espargaro ventured out for 46 laps, eventually ending the day P7 on the timesheets.

jerez, testing
Get All Our Latest News Sent Direct To Your Inbox
Join 30,253 other subscribers.
Follow on Social Media
Get the VROOM Podcast