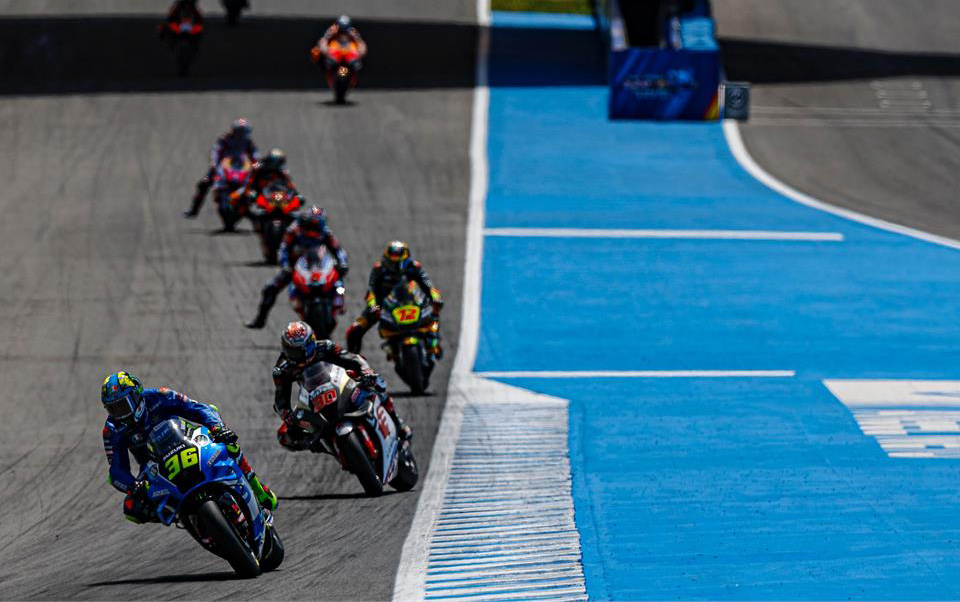 Despite seemingly perfect conditions in Jerez de la Frontera for round six of the MotoGP™ World Championship, the day was not without its struggles for Team Suzuki Ecstar riders Joan Mir and Alex Rins.

The former was unable to keep pace with the lead group and closed the 25-lap race in sixth, and the latter was forced to settle for 19th place after a major run-off at Turn 12.

The team were expecting an uphill battle after Mir qualified ninth and Rins 14th, but a combination of low grid positions and a lack of front feeling meant the riders just had to get through the day. After a rough start with some twitchy moments, Mir had slotted into sixth place by Lap 5, keeping an eye on those in front of him and keeping pace as best he could. When Takaaki Nakagami began to close the gap to Mir with around 10 laps to go, the Mallorcan responded well and took himself up to the ferocious battle for third but it quickly became clear that collecting points had to be the priority and he added 10 to his tally by finishing sixth.

It was a quiet race for Rins as his goal to climb through the order proved impossible. He initially found himself 12th, but on the ninth lap of the race, when he was running in the points, a huge moment and subsequent trip into the gravel plummeted him to 22nd. A shame for the rider who had been running second in the championship standings. Rins closed the Spanish GP in 19th.

The team and riders will stay in Andalucia for a day of testing at the Circuito de Jerez – Angel Nieto on Monday May 2nd.

“Honestly, the temperature was higher in the race than it had been during the rest of the weekend and that caused me a lot of trouble with the front. I was trying hard to get closer to the other riders but I was going wide and it messed up my consistency – sometimes I would have a ‘clean’ lap and other times I would run out wide because of the front feeling in the heat. But, you know, we have to think of today as providing us with useful information ahead of other hot races. After last week’s DNF it was nice to score some points, at least.”

“I suffered quite a lot at the start, and I had riders all around me. On the first two corners I had some close calls with other riders and I had to be careful. Then when I settled into the race I didn’t feel much stability on the front. At Turn 11 I had a fast run-off after losing the front, and I’m glad I saved it, but I just didn’t have a good feeling so I couldn’t gain enough places following that. I feel disappointed because I wanted to have a nice race here in Spain, but let’s move onwards and upwards.”