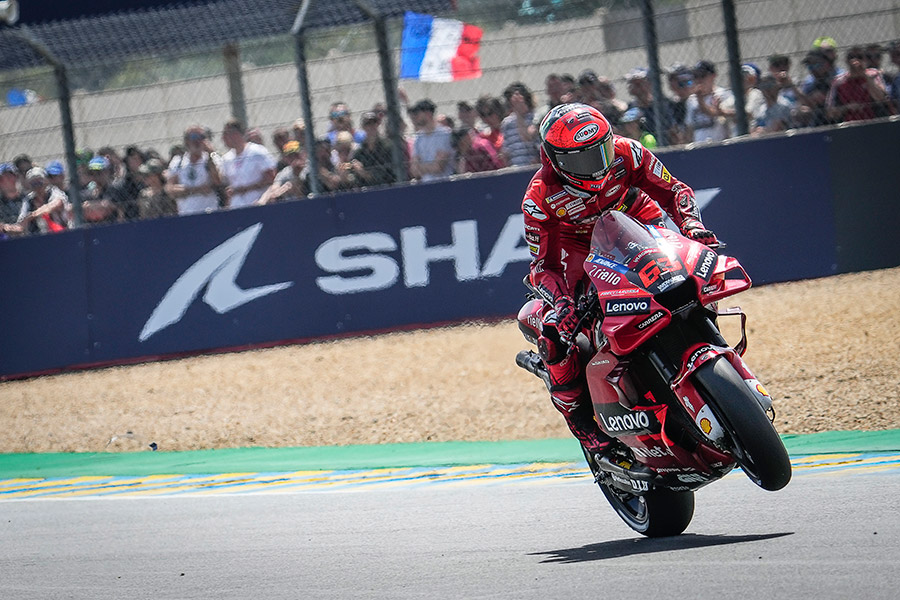 A magnificent performance from Francesco Bagnaia at the SHARK Grand Prix de France saw him secure consecutive MotoGP™ pole positions for the first time this season, and with a new All Time Lap Record to boot. His 1:30.450 is the fastest two-wheeled lap seen around Le Mans and it also gives Ducati their first pole at the venue.

It’s double delight for the Ducati Lenovo Team too, with Jack Miller joining his teammate on the front row and Aprilia’s Aleix Espargaro’s remarkable run of form continuing as the number 41 takes a third consecutive front row.

French favourites Fabio Quartararo (Monster Energy Yamaha MotoGP™) and Johann Zarco (Pramac Racing) had slightly tougher Saturdays. Quartararo will start fourth after getting pipped to the front row, and Zarco qualified sixth but has a 3-place grid penalty for disturbing another rider in Q2.

Q1
Having missed the top 10 cut in Free Practice, Jorge Martin (Pramac Racing) and Joan Mir (Team Suzuki Ecstar) navigated through Q1 to take their places in the battle for pole, with Marco Bezzecchi (Mooney VR46 Racing Team) denied by just 0.007. Red Bull KTM Factory Racing had a tough day at the office too, with Brad Binder and Miguel Oliveira both missing the cut.

Q2
The first runs gave us our first Bagnaia and Quartararo showdown of the weekend. Both riders were keen to get a banker lap in early, and it was the Italian who struck first with an impressive 1:30.6 to sit on top. However, it didn’t take long for Quartararo to get the French fans on their feet as he responded by going 0.011s quicker on his next attempt. As the riders returned to their boxes, Round 1 had fallen the way of the reigning World Champion

As riders returned to the tarmac, they began to close the gap to the top. Zarco was the first to improve and put himself on the front row provisionally, while Enea Bastianini (Gresini Racing MotoGP™) had gone under Bagnaia’s pace-setting time in the first three sectors. Unfortunately for the two-time premier class race winner, his effort fell just short as he replaced Zarco in P3.

As the session ticked down, Bagnaia upped his game once more, posting a rapid lap to break the All Time Lap Record in Le Mans as well as towing teammate Miller into the top two. Moments later, Aleix Espargaro joined them on the front row after a blistering effort from the RS-GP, and all eyes were now on Quartararo.

The pressure was on the Yamaha rider, and despite a clean two first sectors on his final time attack, he lost time in the third before losing even more completely in the fourth, leaving him with a P4 start come lights out. He’ll be joined on the second row by Bastianini in P5, and after Zarco’s penalty the Frenchman drops to P9, with Mir moving up to take sixth on the grid.

The Grid
The two Ducatis head the Aprilia, with Quartararo keen to push on from fourth. Bastianini was top Independent too, ahead of Mir now gaining a row as well as a place.

It was frustration for the Repsol Hondas as Marc Marquez rolled out of his time attack, while Pol Espargaro was the rider affected by Zarco being slow on the racing line. They will line up in P10 and P11 respectively, with Independent Team counterpart Takaaki Nakagami (LCR Honda Idemitsu) completing the top 12.

Red Bull KTM Ajo’s Pedro Acosta has first pole position in the Moto2™ class after breaking his own, hours-old All Time Lap Record at the SHARK Grand Prix de France. Jake Dixon (Inde GASGAS Aspar Team) qualified second and will be in a Red Bull KTM Ajo sandwich on the front row, with Augusto Fernandez was third in Q2. World Championship leader Celestino Vietti (Mooney VR46 Racing Team), on the other hand, could not escape Q1… and he’ll start 19th.

Q1
The story of Q1 was Vietti’s bid to rescue a starting position. The Italian improved on each of his last three laps in the session, but every time, it was only good enough for fifth . The last of those efforts was a 1:36.310 which was just six thousandths of a second slower than Jorge Navarro’s (Flexbox HP 40) best lap, meaning Vietti will launch from 19th on Sunday. Navarro moved through in fourth, with Bo Bendsneyder (Pertamina Mandalika SAG Team), Fermin Aldeguer (MB Conveyors Speed Up) next up and Lorenzo Dalla Porta (Italtrans Racing Team) top to move through.

Q2
Sam Lowes (Elf Marc VDS Racing Team) was the early pace-setter in the second stanza of qualifying, but then came a highside at Garage Vert (Turn 8). The Briton appeared winded, taking some time to get to his feet before riding a scooter back to the paddock, as the 1:36.071 which he set on his second flyer looked vulnerable. He’ll be reviewed on Sunday morning to check he is fit to race.

Ultimately, the front row lap times would all come in the 11th minute of the session. Fernandez was first to better Lowes’ marker when he set a 1:35.963, only for FP3 fast man Acosta to pip his team-mate with a 1:35.803 as he followed him across the line. Then, moments later, Dixon split the KTM Ajo duo with a 1:35.92. No one else beat Lowes’ time, however, meaning the Briton is set to start from fourth position when lights go out on Sunday afternoon.

The Grid
Behind Acosta, Dixon, Fernandez and Lowes, Albert Arenas (Inde GASGAS Aspar) qualified fifth on a 1:36.088. He will be joined on Row 2 by Alonso Lopez, who is in full-time at MB Conveyors Speed Up and has so far had the upper hand on deservedly hyped teammate Aldeguer in France.

Aron Canet (Flexbox HP40) took seventh, and Ai Ogura (Idemitsu Honda Team Asia) was eighth with the only flying lap which he could get in before crashing at La Chapelle. Rounding out the top 10 were Bendsneyder and Tony Arbolino (Elf Marc VDS Racing Team), who’ll be looking for more on Sunday – as well FP1 fast man Somkiat Chantra (Idemitsu Honda Team Asia) in 11th after he took a tumble at Chemin aux Boeufs.

Q1
Under the continued sunshine, Deniz Öncü (Red Bull KTM Tech3) topped Q1 to seal his place in the battle for pole, bouncing back from a FP3 crash.

Q2
As the initial quick runs came to an end, it was little surprise to see everyone playing catch up with Foggia as the Italian continued his impressive French GP form, leading teammate Suzuki in a provisional Leopard 1-2.

As the clock ticked towards the three-minute mark, the lightweight class had time for a couple more flying laps. Masia posted an effort that was good enough to get him into the top three on his first attempt, with Carlos Tatay (CFMoto Racing PrüstelGP) also moving up the timesheets.

Meanwhile, neither of the top two had improved on their opening efforts. The timing screens then saw a number of riders light up the first sector in red, but of all of them, rookie Diogo Moreira (MT Helmets – MSI) was best placed to take a late pole. However, he couldn’t quite keep up the push and will have to settle for P4, dropping Tatay to fifth.

There was still one rider out there who could dislodge Foggia, and that was Championship leader Garcia. After an encouraging first couple sectors, the Spaniard then lost time in the and in the end will have to launch his bid for victory from seventh on the grid, one place ahead of his starting position last year.. when he won. For good measure though, Foggia also put in one more fastest lap of the session, confirming pole.

Garcia and Guevara are next up, with Rossi taking P9 on the grid via Q1. Öncü completes the top ten, ahead of Joel Kelso (CIP Green Power) and Ayumu Sasaki (Sterilgarda Husqvarna Max).

#FrenchGP
Get All Our Latest News Sent Direct To Your Inbox
Join 30,246 other subscribers.
Follow on Social Media
Get the VROOM Podcast