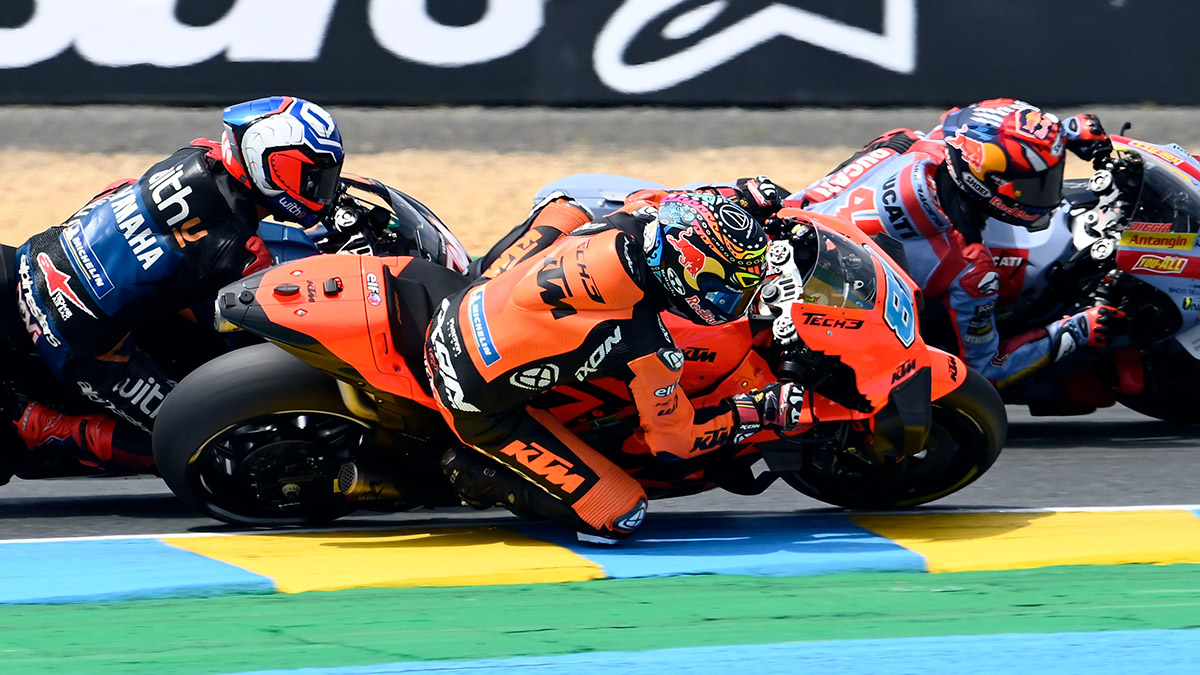 The Tech3 KTM Factory Racing took its seventh start of the season in Le Mans for the SHARK Grand Prix de France, with a record-breaking attendance from the French motorcycle fans who were back in full capacity for the first time since 2019. The atmosphere was very special as the crowd sang their national anthem, the iconic Marseillaise, before the race started. Rookies Remy Gardner and Raul Fernandez were starting from the twenty-second and twenty-fourth positions respectively following a tough qualifying Saturday on the famous Bugatti Circuit.

A cloudy Sunday was on the horizon this morning as grey clouds started to threaten the MotoGP paddock. Was it going to be a dry, wet, flag-to-flag race? During the twenty-minutes of the allocated warm up, Australian Remy Gardner made his final adjustments for the race in two runs separated by a bike swap training ahead of an eventual flag-to-flag race. The rain eventually came earlier than planned today, at 11am, and the sun was shining for the MotoGP race this afternoon. Remy was one of the three riders on the grid to set off with a hard tyre at the front. From his twenty-second, he took a great start and got himself rapidly in the positions close to the top 15. Unfortunately, a contact with fellow rookie rider Fabio Di Giannantonio caused Remy to crash in only his fourth lap, in corner 7. A tough result to swallow for Remy and his crew after a good start to the race.

On the other side of the garage, Raul Fernandez was starting from the back of the grid for his return to racing after missing out on both the Portuguese and Spanish Grand Prix. Although he was declared fit to race, his wrist still caused the Spaniard some pain all weekend long. During the warm up this morning, he also practiced for a potential flag-to-flag race. Finally this afternoon, he took the start of his seventh MotoGP race with a medium tyre at the front and a soft at the rear, just like most of the class. The start to the race was not ideal as he lost the front of the group. Unfortunately, he lost the front on turn 6 of the seventh lap as he was trying to catch up with the group of riders ahead of him.

“It was a very difficult weekend for us here at the French Grand Prix. We struggled to find a good pace or the right settings on Friday and Saturday, but today it seemed that we had managed to make a little step. Fabio Di Giannantonio closed the door under my nose, I did a high side, and retired unfortunately.”

“The most important thing today is that I am ok after my crash so I feel lucky. I am really disappointed with myself. Before exiting the garage, I told myself that I had to finish the race for my team, for their home Grand Prix, so I want to apologise to them.
At the start of the race, I pushed too much trying to catch the group of riders ahead of me, and I ended up making a mistake and crashed, losing the front tyre. Although my hand still hurts, today I was getting closer to Remy Gardner and the KTM Factory riders, so it is a great shame.
We are going through a tough period right now. We need to continue to work hard and find how we can improve our bikes so we can be faster and feel more confident on them. The goal is also to enjoy riding, because when you fight at the back of the grid, it is not very fun.”

Get All Our Latest News Sent Direct To Your Inbox
Join 30,253 other subscribers.
Follow on Social Media
Get the VROOM Podcast