From the gravel to the podium for Izan Guevara in France, seventh for Sergio Garcia 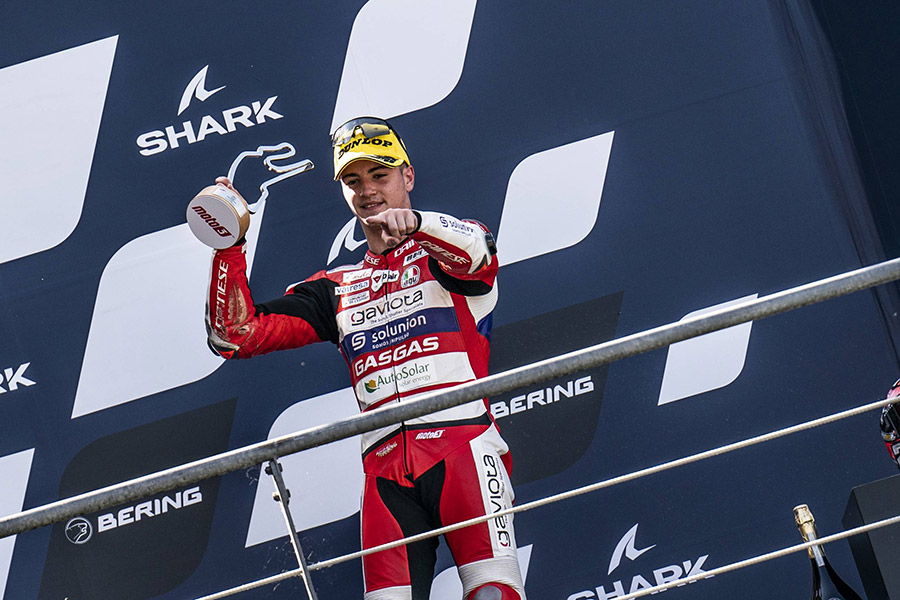 Izan Guevara went from the gravel to the podium in less than an hour. The Gaviota GASGAS Aspar rider was one of the first to crash when the rain appeared on the first lap, but race direction immediately stopped the race and allowed all the crashed riders to compete again in the new race, held over 14 laps. This has also been the case with his teammate Sergio García Dols, and with three other riders. After a few intense minutes of work in the garage, both riders were able to get back out on the track and fought with the leading group, although Guevara had to recover several positions.

García was competing ahead of Guevara, but a couple of mistakes in the race, in which he had to use a used tyre as the one he was using was damaged, have relegated him to the seventh position. Meanwhile, Izan Guevara has been recovering from seventh with five laps to go, until finishing third after overtaking Dennis Foggia in the final part of the track. With these results, Sergio García maintains the leadership of the category with a 17-point advantage over Jaume Masiá, second, and Dennis Foggia, third, while Izan Guevara is fourth.

3rd Izan Guevara (+0.220):
“It’s time to enjoy, it’s my second consecutive podium in the World Championship. I’m happy to have been able to finish third after the crash. In the first race, when we got to the last sector, it was raining and the track was a bit wet. I entered the last corner as usual, but lost the front end. Luckily, we were able to return to the track. Yesterday I was not comfortable on the bike, but today I felt much better. In the second race I did a good start and little by little I’ve been overtaking. I felt strong, but it was difficult for me to get to the front.”

7th Sergio García (+2.007):
“It was a complicated weekend, but we saved it a bit by scoring and finishing seventh. It’s not what I wanted, but we made some mistakes in the race. After the crash and the red flag, I had to use a used tyre and that weighed me down in the last few laps. Anyway, I’m happy and we have to continue working.”