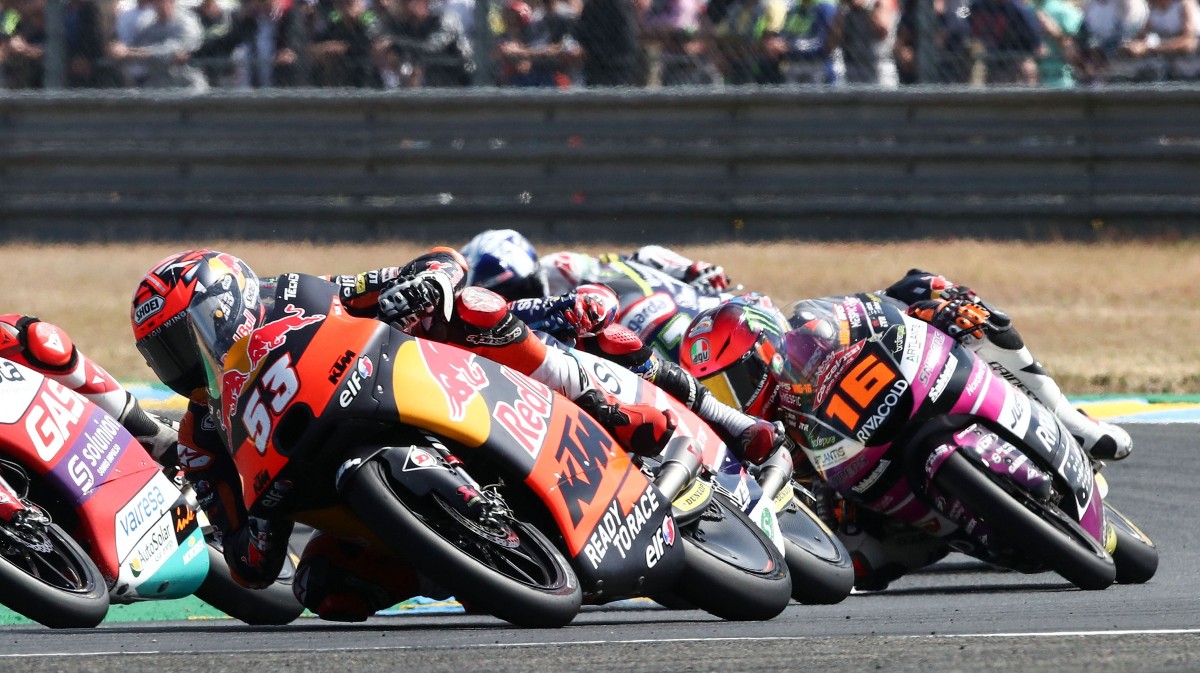 Le Mans and its drama. Would we have it otherwise? Once again, the SHARK Grand Prix de France did not disappoint. After two sunny days, the paddock woke up under a threatening sky this morning, leaving Red Bull KTM Tech3 and the Moto3 class wondering under which conditions the race would be declared at 11:00 local time.

No rain until the warm up lap, so the race was declared dry and the entire class took the French Grand Prix start in slick tyres. Unfortunately, it quickly started to rain, intensively on some parts of the Bugatti circuit, causing the first few crashes and leaving the track impracticable. The race was immediately red flagged with less than three laps completed. The rain stopped quickly, but it was enough to declare the race as wet, with a new start scheduled at 11:25 for fourteen laps, with the initial grid positions.

Turkish rider Deniz Oncu was starting from the tenth position on the grid today and was able to gain rapidly a few places within the first lap of the first race. At the restart, Deniz took another solid start to establish himself within the leading group of riders. Once again, he had great battles with his usual rivals and was riding very fast. He was close to the podium spots, but lost some places unfortunately in his battles, which put him outside of the top 5. Deniz passed the line in P9, scored seven points, and will look forward to heading to Mugello in two weeks.

Spaniard Adrian Fernandez took a rocket start and found himself in P10 after starting from the twenty-fifth position on the grid. Unfortunately, he was not able to replicate at the race restart and lost quickly the front group, leaving him outside of the battles and possibilities to fight for the points today in Le Mans. He still gained a few positions, as he finished in P20. Next, Red Bull KTM Tech3 will be traveling to Mugello for the Gran Premio d’Italia Oakley.

I was honestly expecting so much better than a P9 here in Le Mans. I made a lot of mistakes today, especially when I went wide and lost positions. I tried to recover and overtake the two riders ahead of me in the last lap, but it was not enough unfortunately. I wanted a win, or at least a podium, so I am very disappointed. Time to reflect, and get ready for Mugello.

Tough race day in Le Mans. I took a really good start at the beginning, but unfortunately we got a red flag. I did not set off so well at the restart, I did not find the same feeling within the first few laps and it was therefore difficult to recover and overtake other riders. Thank you to my team, and I look forward to going to Mugello.