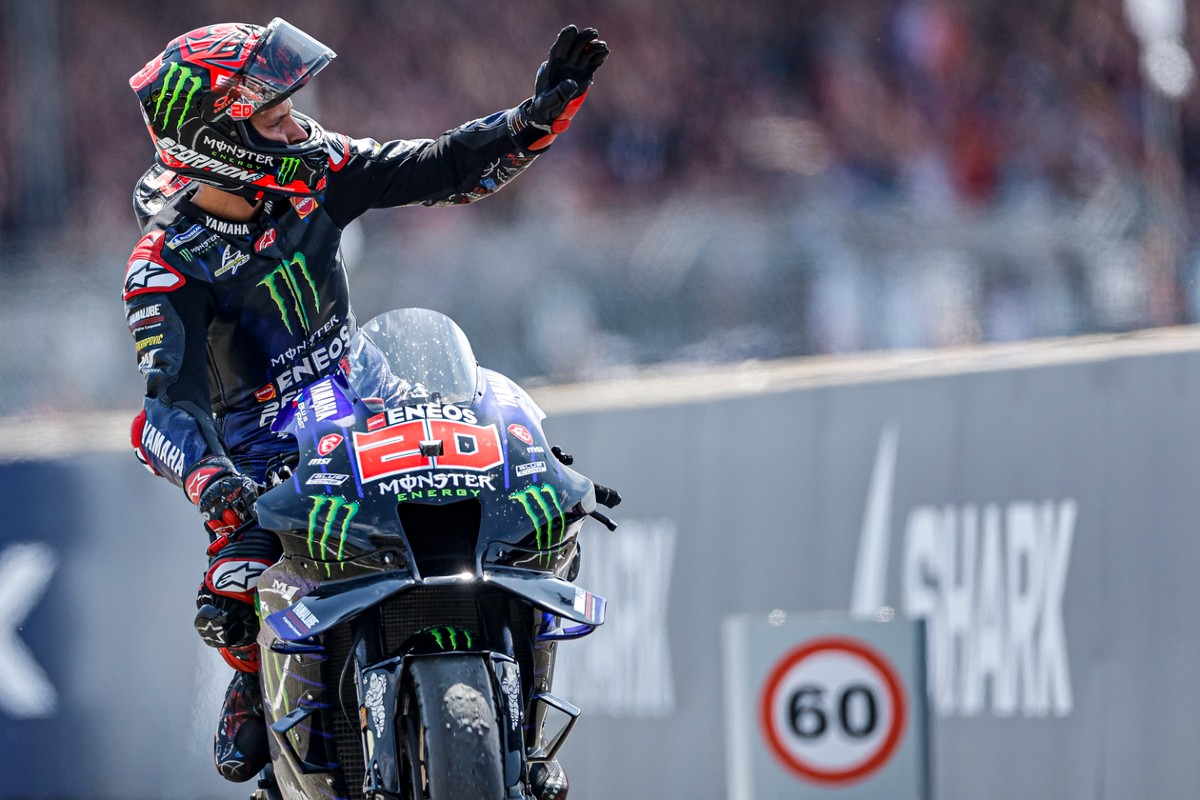 Monster Energy Yamaha MotoGP‘s Fabio Quartararo did a good salvaging job. After a difficult start, he pushed on to take fourth place and 13 championship points. Franco Morbidelli also made a solid recovery. A run-off on the sighting lap didn‘t keep him from pushing to 15th place.

Quartararo had a less than desirable start from P4. He wrestled through the Dunlop chicane in the busy pack and found himself in eighth. With Alex Rins crashing out on lap 3, the Frenchman started to gain momentum. He picked off Marc Marquez soon after.

At that point in sixth position, El Diablo had a bit of a gap to close to the rider ahead of him, but as the fastest man on track at the time, he knew he could get the job done. He soon reeled in Aleix Espargaró. By lap 11, the pair of them caught up with Joan Mir in fourth place, who later crashed out on lap 14. With Francesco Bagnaia also crashing on lap 21, Quartararo was now fighting for a podium position. He came super close but wasn‘t able to put in a move. He took the chequered flag in fourth place, 4.288 from first.

Morbidelli had an early off-track excursion on the sighting lap but managed to stay upright and make his way to the starting grid. In a rather chaotic few opening laps he stayed out of trouble and found himself in 19th place as the dust settled.

The Italian had found a good feeling during Warm Up in the morning, and it gave him the confidence to push. He enjoyed a close battle with Maverick Viñales at first and later with Marco Bezzecchi. The Le Mans circuit had been causing trouble for many riders all day during the races, catching them out and luring them into making mistakes. The Yamaha man, however, focused 100% during the race and crossed the finish line in 15th place.

Today‘s results keep Quartararo in the lead in the championship standings with a 102 points total, while Morbidelli is in seventeenth with 19 points. After Round 7, Yamaha and the Monster Energy Yamaha MotoGP team move up to second place with 102 points in the Constructor championship and continue to hold third position with 121 points in the Team championship.

The team will be back in action in two weeks‘ time for the Gran Premio d‘Italia Oakley at the Autodromo Internazionale del Mugello track, held from 27-29 May.

I expected much better from this race. My start was not good. I had the pace of the top guys, but this was the best I could do. It was difficult to overtake, so we need to improve this. But I didn’t give up. I nearly had a few crashes during the race, but I always give my 100%, in this case to fight for the podium today. We need to take more risks so I can defend my lead in the championship.

It was a difficult race because I got stuck in the pack. It was tricky to fight with the guys, and I didn’t have the perfect front feeling. I couldn’t make a lot of speed in the middle of the corner. In the end, we got one point, which is a trust injection. We saw some good things and good speed this morning on used tyres, so things are there. We just need to understand how to put them together. The task is difficult, but we can do it!