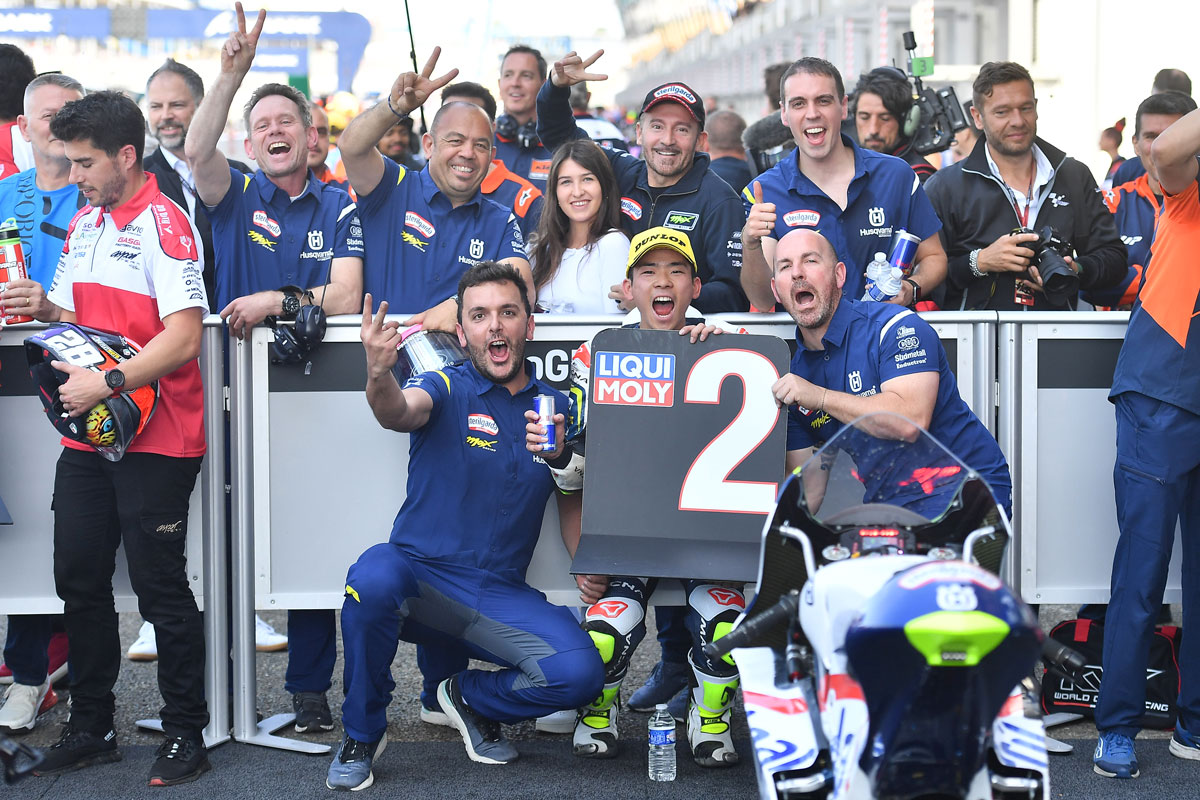 The Moto3 race was once again one of the most exciting, giving incredible emotions in every moment. What made the race unpredictable was the weather, because a few minutes before the start a few drops of rain began to fall. The race was declared dry and started regularly. Ayumu snapped from the eleventh box, after one of his colleagues was demoted.

Unfortunately, the rain almost immediately increased its intensity and when the drivers arrived at turn 14 of the first lap, they found the track very wet. Those who were in the lead slipped and between them was our Ayumu. Because of this the red flag was displayed. Ayumu pushed the bike to the nearby pit lane, to get back into the pits. Unfortunately in the crash his Husqvarna suffered considerable damage. For this reason, the team of Ayumu and John actively collaborated to rebuild the bike.

The work done was egregious, as in the few minutes available before the restart the bike was rebuilt flawlessly. The race started from scratch, so with exactly the same starting grid, but the laps to be completed were reduced to fourteen. Ayumu got off to a good start from the eleventh position, while remaining rather cautious, due to the track conditions. Actually, the track dried very well and during the race there was no more rain. Ayumu started a great comeback and lap after lap he filled the gap with the leading group.

With five laps to go he was fourth. Continuing his incredible progression, he arrived on the penultimate lap in second place. The epilogue was just a few corners from the end, when Ayumu from the second position, suddenly changing the trajectory, made a great overtaking. Unfortunately, the different trajectory resulted in a lower exit speed from the next corner, so he was again overtaken, crossing the finish line in second position. It was a great fight that brought Ayumu to the podium for the third time this year.

AYUMU SASAKI :
“Today in the first race we crashed and the bike was really damaged. The team did a fantastic job. They had only10 minutes to fix the bike . I was thinking that i could not race because the bike was really damaged. Then though we could do the restart and i felt good on the bike. Even though on Friday we struggled a bit, day by day we improved and today I finally felt good on it. In the last lap, when i was second and Masia was first, in the last sector I was thinking where to try, because i just wanted to win. I was thinking to pass him in the second last corner on the braking, but Masia was going too fast at that point. So I thought “i need to pass here” and i passed him. I went wide in the third last corner and he passed me with a great braking. In the last corner I tried a little bit, but since I crashed there I was not sure about it. At the end I finished second and I am a little bit disappointed, but I got the third podium of the season and this is great. I am doing my best in every race. We are fifth in the championship. I just can’t wait to race in Mugello, which is our home Grand Prix.”