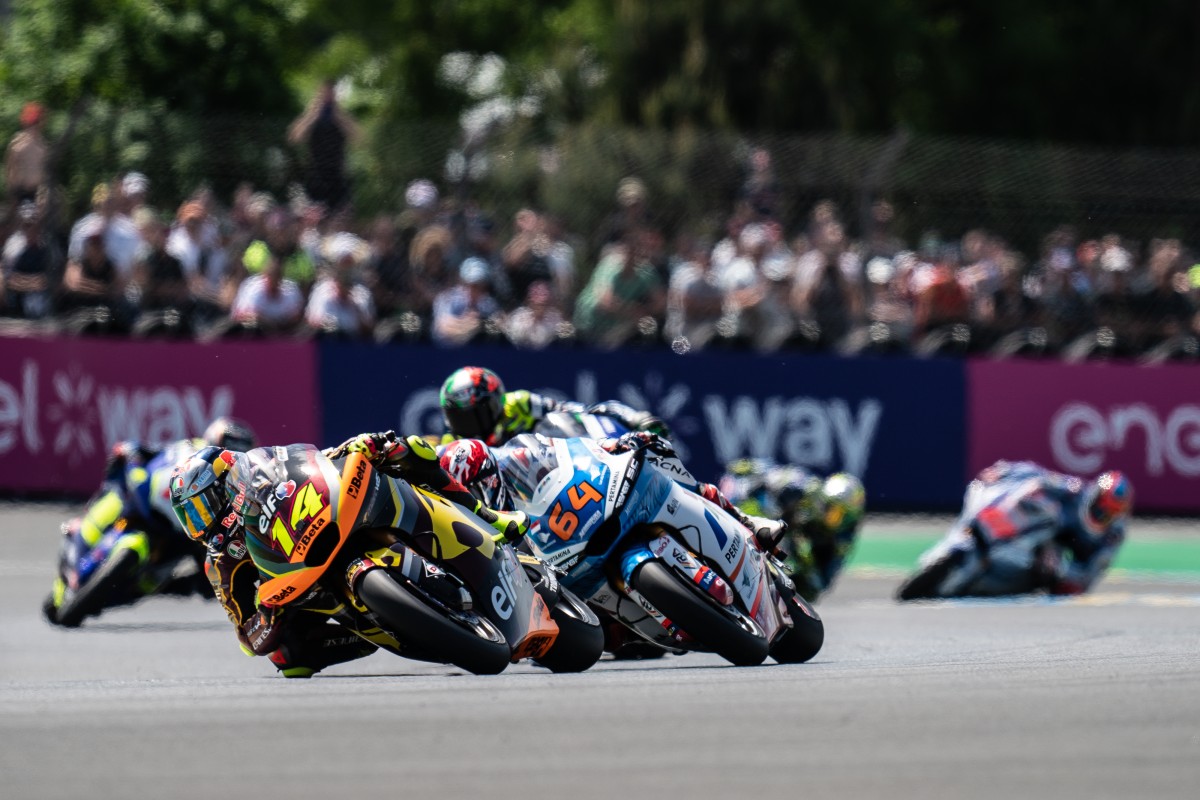 An injury sustained during Saturday’s Q2 qualifying session meant Sam Lowes had to withdraw from the race at Le Mans while Tony Arbolino suffered an unfortunate fall on the second lap.

A record attendance was present at the Le Mans Bugatti Circuit for the 2022 French GP with, 110,003 fans present to watch Sunday’s action – a record for the track.

Despite a morning shower, perfect conditions greeted the Moto2 riders ahead of the race at 12.20, with sunny skies and track temperatures of 32 degrees.

After identifying braking stability as an area of set-up that needs improving, Tony showed there was reason for optimism in warm-up, when he set the eighth fastest time.

The 21-year old had a tough start from ninth on the grid and was in a good duel with Fermin Aldeguer for 15th when the pair crashed out in separate incidents on the second lap at turn six.

Tony therefore remains on 70 points in the world championship in fourth position, 38 back of leader Celestino Vietti.

I missed the start and I lost so many positions on the first lap and I felt not as good as I expected. Honestly, the crash was a consequence of that because I was pushing too much and making some mistakes when on line. I know I can do a good job. But this is racing. We need to forget this weekend and start working toward the home GP at Mugello in two weeks’ time.

The 31-year-old was challenging for pole position on Saturday when he crashed exiting turn eight. A huge impact on his back left Sam in some pain.

The Briton bravely rode in Sunday warm-up to assess his condition but as he noted a strong pain in his neck and a feeling of dizziness, he wasn’t passed fit for the race.

It is a shame for Sam, who showed excellent pace all weekend. He remains on 35 points in the championship, in eleventh place.

I felt quite sore over night – in my back and the top of my knee. But when I was on the bike, I had more pain at the top of my neck and the back of my head. In the first few laps I was struggling a bit to focus and with my vision. When I told the doctors about this after warm-up they said I couldn’t race. I agreed with them because I found it difficult to judge the distance, which wouldn’t have been good for the start of the race. It’s frustrating because in warm-up I was fast and to sit and watch the race as I did was difficult. You have to have respect for yourself and for the other people on the grid, especially in the first laps. Also, I don’t think I could have concentrated for 40 minutes of racing. The rules are the rules and it’s safety first. I’d like to apologise to the team because the bike has been great all weekend and we’ll try again at the next one.