NOT The MotoGP News: #FrenchGP 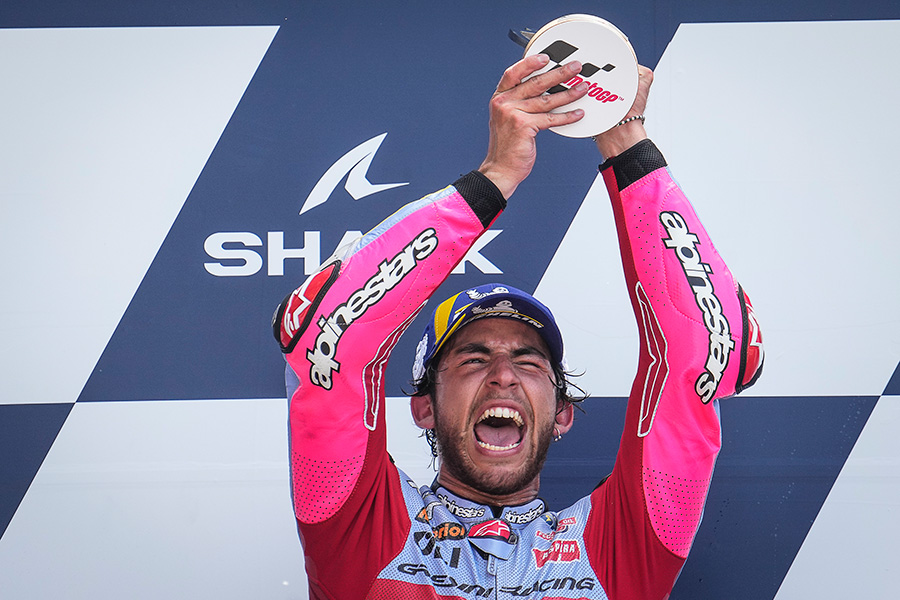 Le Mans is a weird MotoGP track; It lives in the shadow of it’s more famous brother, the 24 Heures du Man, and although the bike 24 hour runs on the same Bugatti course, MotoGP just seems slightly less exotic. During the 24-car race, parts of the Bugatti course are a car park for spectators. Oh dear.

Never mind though because this season Quat the Frenchman rocked up to his home circuit as World Champion. Super-handsome Quat and his not so compatriot, JZee galvanised the fans. We’ve never seen so many flags waved since the French army capitulated in 1939 although these ones weren’t white.

Even better, Quat was on the front row, and JZee would have been up front if he hadn’t demoted for some kind of EU regs infraction.

Jackeroo Miller confounded his critics by getting off the front row to lead, whilst Quat shot backwards to 8th. This isn’t what the French wanted, but just like the Maginot Line, there was little they could do about it. Marc Marquez had had an awkward Qualifying session, by crashing and not getting a decent grid position, but watching him pass Origami and Quat in the early laps was like turning the clock back 3 or 4 seasons.

Best KTM of the weekend, Brad Binder, lost his front wing after a clash with JZee. It was all getting a bit scrappy. And during that scrappy bit, Rins showed the Japanese Suzuki bosses that they were mad to ditch the team by slipping into 3rd place. The bosses got their revenge by tweaking their PS2 and making Rins run-on at the Dunlop Chicane, narrowly missing Pol Asparagus on his dud of a RCV.

By the third lap, Baggy was in the lead and just started creeping away from Jackeroo. Tasty Basti was third, Mir 4th and ever-so-confident Aleix was in 5th. And looking racy.

Aleix’s teammate was dead-last though. With Rins and Mir on the market, Viñales isn’t the only rider who needs to start riding for their contracts (hello Pol), but he does seem the most at risk of ending up in WSBK next year. Luckily for Mav, (who’s biopic Top Gun II is released 25 May – kill me now), he almost did better than the entire KTM squad by finishing in 10th.

Just before the halfway point, eventual winner Basti edged past Jackeroo in second, and set about chasing Baggy. Quat meanwhile had re-grouped from his initial poor start and was passing Marc and then pulling a decent gap on him. Marc was the top Honda by a good shout. And Quat was the best M1 by a mile. Former 2nd in the World Championship, Franky Going-Backwards was 17th. This probably pleases either Mir or Rins (Rins most likely) as it means they’ll have a factory salary next year.

Unluckily for Mir, he crashed out too (from 4th). Some might say he just tossed it at the scenery as revenge. But not us. At the same time Tasty Basti has caught Baggy and was certainly sand bagging him. Basti had the pace to pass but took his time and waited. JZee didn’t bother with patience and zipped past a weakening Marc, whilst a lap later his teammate Martin(e) slid off. He’s not having much luck this season. We kinda thought next season would see Martin(e) alongside Baggy, with Miller in the Pramac team alongside JZee. Now, we have no idea. Again.

By the 21st lap Basti passed Baggy, but Baggy fought back to re-pass the Tasty Beasty**. And then Pecco lost the front. For no real reason. Except to make the championship more interesting. The new front two of Basti and Jackeroo were in the clear, the closest battle was for third. Both Quat and Aleix are good guys and one had to win. Exuberant and cheerfully angry Asparagus was the kiddy! France took 4th and 5th, and Quat maintained his championship lead.

*Yep – Welcome to the Moulin Rouge
** Could we get Basti to eat a pasty at Silverstone?

#FrenchGP, humour
Get All Our Latest News Sent Direct To Your Inbox
Join 30,253 other subscribers.
Follow on Social Media
Get the VROOM Podcast
Download our Vroom.GP App