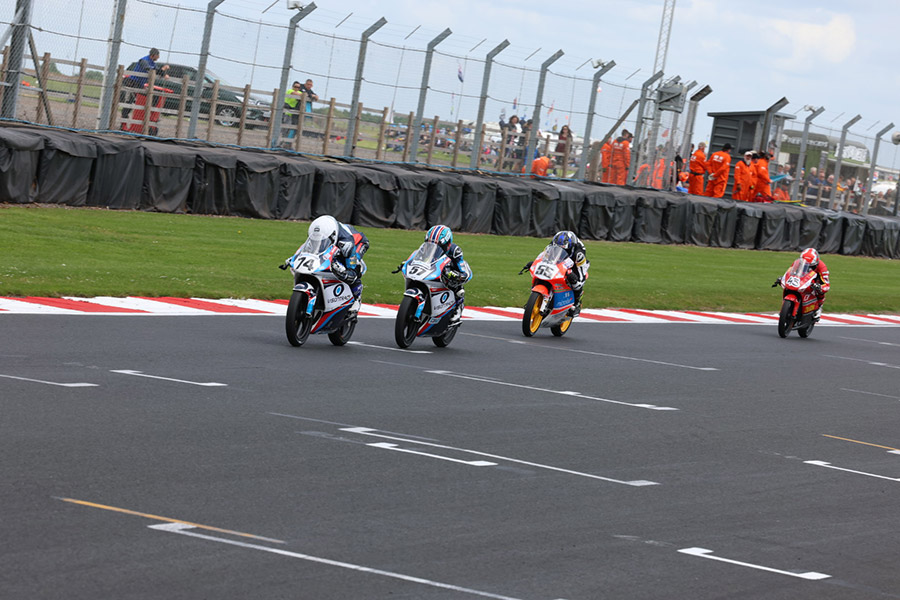 Carter Brown (MLav VisionTrack Academy) took his first win of the Honda British Talent Cup season in Race 1 at Donington, the number 74 coming out on top on the drag to the line against teammate Johnny Garness (MLav VisionTrack Academy) in a classic BTC close finish. Harrison Dessoy (Microlise Cresswell Racing) took third, with drama for Kiyano Veijer (Microlise Cresswell Racing) as the Dutchman crashed out.

Off the line it was Garness with the initial launch from pole, but by Turn 1 it was Veijer with the holeshot ahead of an already close battle between Rhys Stephenson (Rocket Racing) and Brown, with the number 23 then through soon after to lead. After the first few shuffles, however, a classic freight train formed at the front.

It was just past a third of race distance, Lap 7, when Veijer crashed out. The Dutchman had duelled Stephenson early on and the two then made contact, with the Microlise bike sliding off into the gravel. That was drama in the standings, and there was more to come.

As the laps ticked down the freight train remained pretty close, with no one able to make a break and split the group, but it soon lost another key name: Stephenson. The number 23 was out of the running, adding another dash of drama.

Starting the final lap though, Brown had a small gap ahead of Dessoy vs Garness, with the number 57 coming through into second at Redgate. But Garness was making progress into the deficit as the freight train navigated back markers, and coming into Coppice he had a look. The number 57 couldn’t quite find a way through from thereon on though, forced to settle for second as he and Brown were separated by just thousandths over the line.

Dessoy took third for another impressive podium finish as his step forward in 2022 continues to pay dividends, and fourth went to Ryan Hitchcock (City Lifting by RS Racing) as he moved forward at Donington. Sullivan Mounsey (Wilson Racing/J&S Accessories) took fifth as the number 4 returns to the fold and gets straight back into the top five, making good late progress through the group.

Harrison Crosby (Banks Racing) won the fight in the second group to complete the top ten.