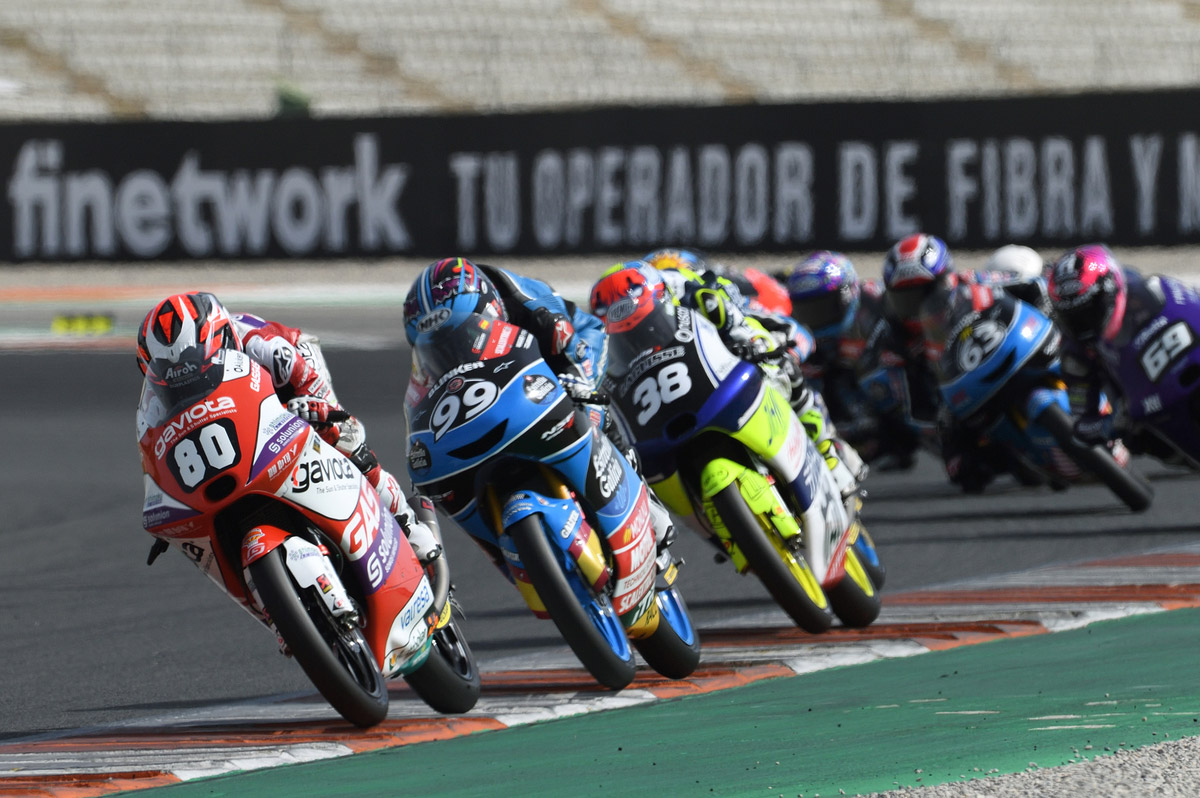 The race for JuniorGP™ Race 1 victory came down to the final lap and making a classy move stick at the final corner was Alonso, who edged out comeback king Angel Piqueras (Team Estrella Galicia 0,0) by just 0.030s – the latter coming from the back of the grid to earn a podium. Third place went to David Salvador (Laglisse Academy) as the Spaniard added to his P3 in Estoril, with Rueda taking away P4 from Race 1.

Race 2 followed a similar pattern; a cracking battle that went right down to the wire. Coming out on top this time around was Rueda who had spearheaded the pack for most of the race, as we saw Fillipo Farioli (Aspar Team) – a crasher in Race 1 from the lead – and Salvador standing on the rostrum. Leading the Championship after Race 1, Alonso crashed at the final corner but managed to remount and cross the line P7. But having won from pole, Rueda heads to Barcelona as the title race leader.

The fight for victory in the Moto2™ ECh was between Tulovic and Alex Escrig (Yamaha Philippines Stylobike) after Senna Agius (Promoracing) crashed out of the lead at Turn 12 in the early exchanges. Tulovic went on to win by 1.1s to extend his Championship lead, with the final podium place going to Xavi Cardelus (Promoracing) after a good scrap with Yeray Ruiz (FAU55 TEY Racing). The Stock honours went the way of Marco Tapia (Easyrace Team) after the Spaniard crossed the line in P10.

After a Dodo Boggio (Aspar Team) crash at 11 brought out the red flags, a five-lap dash decided Race 1 in the Hawkers ETC. Two tenths split the top four but it was once again Esteban who managed to fend off the competition for his third straight win, as Team Estrella Galicia 0,0 teammates Brian Uriarte and Rico Salmela – from the back of the grid – completed the podium ahead of fourth place Guido Pini (AC Racing Team).

Race 2 ended up being a bit more straight forward for Esteban. Contact between Uriarte and Pini caused the leading group to be broken up, and from there on, Esteban stretched his advantage to eventually take the chequered flag by more than 2.9s. However, a technical infringement saw his fourth win stripped, so after a mechanical problem in Race 1 and Long Lap penalty in Race 2, reigning Champion Martinez got his first points of the season on the board with P1 in what was a photo finish between himself and Pini in second. Boggio was promoted to P3 after his teammate’s post-race misfortunes, as Esteban heads to Barcelona with a 13-point lead in the overall standings.

valencia
Get All Our Latest News Sent Direct To Your Inbox
Join 30,271 other subscribers.
Follow on Social Media
Get the VROOM Podcast
Download our Vroom.GP App