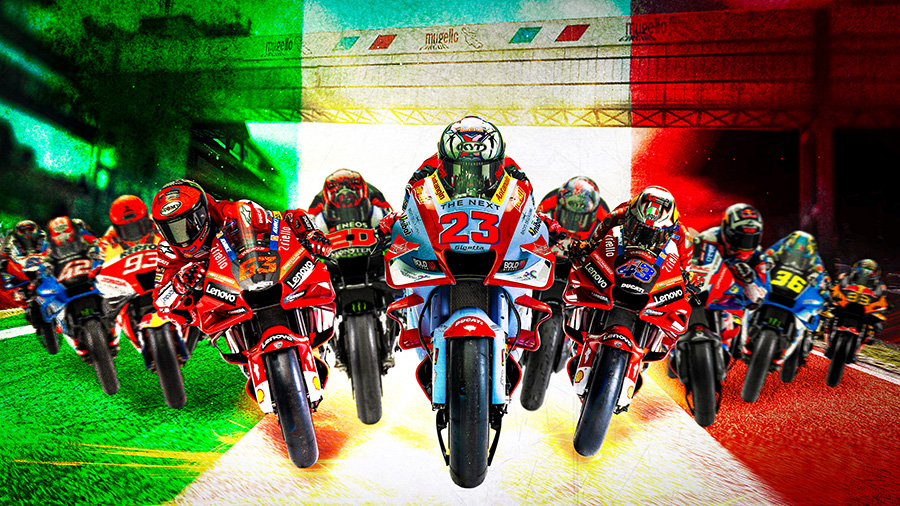 Ladies and gentlemen, Mugello. That’s it, that’s the introduction. Or it could be, with the Italian venue so steeped in character, legend and myth – in the best way – that barely a word need be written. And yet, there is plenty to say as the FIM MotoGP™ World Championship heads for Tuscany and the rolling hills of the Gran Premio d’Italia Oakley, so let’s say it.

Starting in Beast mode would be where Le Mans left off, with Enea Bastianini (Gresini Racing MotoGP™) coming into his first home race of the season as a three-time winner, serious title contender and an extremely fast MotoGP™ rider. Home glory would be something even more special, and with the form seen at Le Mans it’s hard to find a reason to rule him out… and Ducati have seen plenty of recent glory on the hallowed ground of Mugello.

Francesco Bagnaia (Ducati Lenovo Team) will be well aware of that and, despite crashing out at Le Mans, was fast once again. Too fast for everyone except Bastianini. So was it Pecco under pressure? A freak fall? A mistake that looked incredibly unlikely after his performance in Jerez? We’ll start to find out at Mugello. Teammate Jack Miller, meanwhile, arrives from another podium just not the top step this time around, and he’ll want to keep reasserting his authority as a surefire contender at the front – with some bad luck and a tougher start to the season seemingly behind him.

At Pramac Racing, there are two sides to the coin. Johann Zarco put in a solid ride on home ground, whereas Jorge Martin suffered another DNF in a difficult run in 2022, the Spaniard still suffering from the after effects of his big crash last year. What can they do on the team’s home turf? The same question can be asked of Mooney VR46 Racing Team too, as rookie Marco Bezzecchi continues to lead the fight for Rookie of the Year and continues to impress. What will he and teammate Luca Marini have in the locker at Mugello?

Home turf also comes into the equation for Aprilia. Maverick Viñales continues his learning curve, but the Noale Factory continue to impress pretty much everyone with Aleix Espargaro (Aprilia Racing). Concessions somehow seem a distant memory already as the Spaniard and the RS-GP continue fighting for – and taking – podiums, and Mugello will be an interesting one with the long, long straight. Aleix Espargaro’s run is such that he can join only two other riders on the grid if he takes a fourth podium in a row too, with only eight-time World Champion Marc Marquez (Repsol Honda Team) and former sparring partner Andrea Dovizioso (WithU Yamaha RNF MotoGP™) having achieved that in the current field.

Speaking of Yamaha, we can take a look back to 2021 for what they can do at Mugello. And then back to Jorge Lorenzo’s incredible record there, and before that back to Valentino Rossi’s five in a row. Championship leader Fabio Quartararo (Monster Energy Yamaha MotoGP™) is on form too – fighting as he said he would for every position – and he remains in a lonelier postcode compared to his fellow YZR-M1 riders. So does 2021 offer any portents of 2022? Or is it the tougher return to the likes of Losail that offer more clues? We’ll find out, with the long straight one thing likely on El Diablo’s mind, as well as those of Dovizioso and Franco Moribidelli (Monster Energy Yamaha MotoGP™).

The ballad of the inline four is also sung by Suzuki, and we’ve already seen both Alex Rins (Team Suzuki Ecstar) and teammate and 2020 Champion Joan Mir go well at the venue even up against the V4 grunt down the straight. Mir was on the podium last year too, which could bode well as the factory return to Tuscany looking to bounce back from a difficult French GP with two DNFs. Can they get back into the podium fight?

Honda, meanwhile, arrive still looking to find the zone for man and machine, as does Marc Marquez. What can the factory get out of the new RC213V at Mugello? The number 93 has continued his record of finishing as top Honda of late and fought for the podium at Jerez, but then Le Mans was a tougher one. Takaaki Nakagami (LCR Honda Idemitsu) was the closest though as he made a step forward in France, with Pol Espargaro (Repsol Honda Team) and Alex Marquez (LCR Honda Castrol) now looking for the same. Is Mugello, another new venue, another chance to make a step?

Finally, at KTM the tougher 2022 continues, but so does the work to get back to the front. Brad Binder (Red Bull KTM Factory Racing) has impressed nearly every weekend so far, and the South African seems to be able to wring every last drop out of Sunday. Can he do that at Mugello? Teammate Miguel Oliveira is also looking to find more speed and consistency in the dry, but the Austrian factory already know what it takes to win and they’re looking to return to the rostrum ASAP. Can Mugello offer a chance to move forward again after a podium for Oliveira at the venue last year?

After another different winner in Le Mans as Augusto Fernandez (Red Bull KTM Ajo) got back on the top step for the first time since 2019, the Moto2™ grid return to Tuscany for another stunning showdown. Celestino Vietti (Mooney VR46 Racing Team) remains ahead in the standings despite being forced into some damage limitation at Le Mans, and it’ll be a big weekend for the number 13 with home turf pressure. The same is true in some ways of Tony Arbolino (Elf Marc VDS Racing Team), although the COTA winner has a little less to lose as it stands. So who’ll be in their way at Mugello?

Fernandez will likely have an extra boost of confidence after that long wait for another victory, and so too will teammate Pedro Acosta despite crashing out. Crashing out from the lead after taking a lap record pole is a different beast to crashing from the middle of the points, and the rookie will be one to watch. He can still also equal Marc Marquez’ record as youngest intermediate class winner…

Somkiat Chantra (Idemitsu Honda Team Asia) was back on song in France too, and teammate Ai Ogura remains quick. Sam Lowes (Elf Marc VDS Racing Team) will want to bounce back after ruling himself out in France, and Jake Dixon (Solunion GASGAS Aspar Team) crashed after being quick once again. Cameron Beaubier (American Racing), meanwhile, is in a rich vein of form – and he’ll want to take that maiden podium.

And then there’s Aron Canet (Flexbox HP 40). The Moto2™ man of steel followed up his Jerez podium with another, on the best streak of results he’s had in the intermediate class and despite that injury. He says riding with zero pressure – as taking podiums should be a superhuman endeavour anyway, given his injury – has changed his mindset, and so far the proof of the thinking is very much in the racing. The bow tie remains, however, and he says Mugello is a tougher track for him. Can he make at least a little more magic in Italy?

Vietti is under pressure, Arbolino joins him as the two fastest home heroes as we stand, and the Autodromo Internazionale del Mugello awaits a fast field of rivals looking to ruin their party. Will they? They’ll also have wildcard Mattia Pasini in at GASGAS – a man whose record at Mugello needs no introduction –  to contend with, so the field is primed for a stunner.

It’s time to suit and boot up for the stunning Autodromo Internazionale del Mugello, and Dennis Foggia (Leopard Racing) comes into the Gran Premio d’Italia Oakley from a tougher run in 2022, but the Italian is a previous winner at Mugello and remains in the top echelons of the Championship. Now third overall although equal on points with second, Tuscany would be a great place to hit back against the likes of Jaume Masia (Red Bull KTM Ajo) and Championship leader Sergio Garcia (Valresa GASGAS Aspar Team). So can he do it?

Foggia is joined by Andrea Migno (Rivacold Snipers Team) as the two previous winners at the venue, and the two veteran Italians – and Honda riders – will be pushing to get back to their early season form at the first home race of the season. They should be counted out, but then there’s one rider on a super roll as of now: Masia.

The Spaniard has always been quick, but in 2022 he’s added consistency and his mental game seems stronger than ever. With four podiums in a row for the first time ever, nothing says anyone should bet against a fifth. He also has two podiums at Mugello…

Garcia, meanwhile, remains a threat. Championship leader through a mixture of glory and consistency – the latter never getting in the way of the Spaniard making a late race attack – he remains the rider to beat in 2022, and his teammate is no slouch either. It’s easy to assume Jerez winner Izan Guevara will always be at the front now, but the Spaniard has earned his stripes with some impressive performances and there’s no reason to assume he won’t serve up another.

The other rider on a roll is Ayumu Sasaki (Sterilgarda Husqvarna Max). Once again just missing that maiden win at Le Mans, the Japanese rider’s step forward in 2022 nevertheless continues to impress. Last season was derailed through injury and no fault of his own, but 2022 Sasaki is quick, consistent and impressive… so surely it’s just a matter of time?

With the long straight at Mugello, Moto3™ is bound to be a freight train fight. But who will be conductor remains to be decided, with plenty fast riders looking for those valuable 25 points.