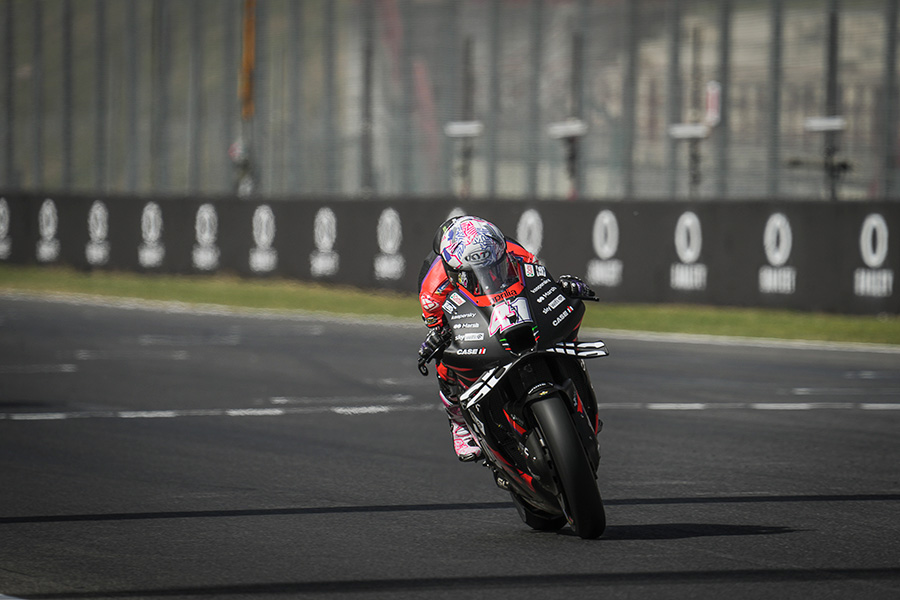 Less than half a tenth decided the top spot on Day 1 at a scorching Gran Premio d’Italia Oakley, with Aleix Espargaro (Aprilia Racing) just edging out home hero Francesco Bagnaia (Ducati Lenovo Team) as the two ended Friday split by just 0.049. Third went the way of Jack Miller (Ducati Lenovo Team), with Aprilia and Espargaro the only presence able to break a Ducati stranglehold on the top six as the two Italia factories came out fighting on Friday.

FP1
LCR Honda Idemitsu’s Takaaki Nakagami dominated the final FP1 timesheets, four tenths clear, but it had been much closer than that. The Japanese rider was already fastest in a top four covered by just 0.031 seconds when he bolted on new medium compound Michelin slick tyres, front and rear, and put in a 1:46.662.

Before Nakagami’s rise,  Bagnaia had been quickest on home soil for both rider and factory. He had clocked a 1:47.070 which Alex Rins (Team Suzuki Ecstar) came so very close to matching when the Spaniard set a 1:47.071. Then, just before the half-hour mark, Aleix Espargaro did match it – a 1:47.070 exactly – before Nakagami moved the goal posts.

Le Mans winner Enea Bastianini (Gresini Racing MotoGP™) was fifth with a 1:47.186, with Maverick Viñales (Aprilia Racing) only 0.005 further adrift and Miller next up in seventh after an early tour through the gravel, too.

Miguel Oliveira (Red Bull KTM Factory Racing) ran across the grass on the way to San Donato when he had a close call with Aleix Espargaro, also notable was Espargaro’s Aprilia team-mate Lorenzo Savadori, the Noale manufacturer’s test rider running with a REAR wing on his RS-GP…

When the time attacks came in the final minutes, Bagnaia punched out a 1:45.940 to go to the very top, with Miller following him across the line to set a 1:46.313 and Zarco also in tow as he rolled out a 1:46.349. They were first, second, and third, with more Ducati riders also in fourth, fifth and sixth, but Aleix Espargaro had other ideas – he moved the marker to a 1:45.891 in the final three minutes, thanks in part to a slipstream from team-mate Viñales.

Bagnaia had run off at San Donato as soon as he’d set that high-1:45, but regrouped and almost reclaimed the mantle of fastest lap as he clocked a 1:45.957 with the chequered flag out. He would stay second though, ahead of Miller and Zarco, with Marini fifth thanks to a 1:46.362, and Bastianini sixth.

Zarco was also in the thick of the action for different reasons over the course of the session. His early flyer was still the benchmark when he tucked the front of his Desmosedici at Materassi, an incident which would not only scuff Pramac’s new purple livery but also caused a brief red flag period to clean up the gravel which had been dragged onto the track, rider ok.

Rins later had a similar crash to the Frenchman, before Zarco went down again in the final minute of the session at Correntaio  – rider ok once again.

Provisional Q2 places
Behind that top six of an Aprilia leading five Ducatis, Red Bull KTM Factory Racing’s Brad Binder was the only other rider in the top eight who wasn’t on Borgo Panigale machinery, the South African slotting into seventh on a 1:46.439. Rookie Marco Bezzecchi (Mooney VR46 Racing Team) impressed once more in P8, while points leader Quartararo was ninth. For now, Pol Espargaro is the other rider into Q2 as it stands.

With forecasts of possible rain on Saturday at Mugello, there will be eyes to the skies overnight as the likes of Jorge Martin (Prima Pramac Racing) in 11th and Marc Marquez (Repsol Honda Team) in 12th wait it out. Marquez was 0.767 seconds off Aleix Espargaro’s pace but just 0.040 seconds outside the top 10, having apparently finished the session on the new RC213V chassis. Rins and fellow Suzuki rider Joan Mir both also have work to do if they are to get into Q2…

Jake Dixon is in the box seat to get through to Q2 at the Gran Premio d’Italia Oakley after the Inde GASGAS Aspar Team rider was fastest on the opening day of action in Moto2™. While he was unable to improve in FP2 on his 1:51.966 from earlier on Friday at the Autodromo Internazionale del Mugello, the mercury was climbing well into the 30s, and few riders did go quicker in the afternoon. Augusto Fernandez (Red Bull KTM Ajo) was second quickest, with Aron Canet (Flexbox HP 40) completing the top three, also from FP1.

FP1
Dixon reigned the morning session, and the Brit enjoyed those three tenths in hand to bounce back from a tough end to the French GP. Fernandez was his closest company followed by Canet, and Pedro Acosta (Red Bull KTM Ajo) was next up in fourth as the rookie’s leap forward in Le Mans seems to have carried forward. Filip Salač (Gresini Racing Moto2™) also impressed as he took fifth to open his weekend on the right foot.

Sean Dylan Kelly (American Racing) had an early spill when he ran through the gravel at Casanova and while there was a nervous moment with his bike stopped in the middle of the track, the American was able to scamper away. Somkiat Chantra (Idemitsu Honda Team Asia) also went down in the latter stages at Arrabbiata 2, and went to the Medical Centre for a check up, declared fit.

FP2
Chantra had an FP1 to forget thanks to that crash and was ninth with a 1:52.899, a time which would not have been good enough to get him into the all-important combined top 14. However, the Indonesian GP winner would set the very fastest lap of FP2, a 1:52.350, which puts him fourth overall too. It was close in the session top three though, with Fernandez second within 0.021 and Acosta third only 0.057 off the top.

Day 1 at the Gran Premio d’Italia Oakley was Dennis Foggia (Leopard Racing) vs Jaume Masia (Red Bull KTM Ajo), with the former setting the benchmark in FP1, a time that wasn’t beaten, and Masia taking FP2 to end the day second overall. Third went to another FP1 lap from John McPhee (Sterilgarda Max Racing Team), the Brit completing the top three on Friday.

FP1
Foggia made his statement lap in FP1, quick throughout the session when running on his own and with a best lap of 1:56.916 near the end to top the session.

The Italian was over three and a half tenths quicker than either of the Sterilgarda Husqvarna Max team-mates, John McPhee and Ayumu Sasaki, who took second and third, respectively. Their best laps came in the slipstream and with both tucked into the same group, with McPhee setting a 1:57.283 and Sasaki a 1:57.394. Diogo Moreira (MT Helmets – MSI) finished fourth on a 1:57.850, another impressive showing from the rookie.

FP2
Considering he and Foggia are tied for second in the World Championship, it was fittingly Masia who set the pace in FP2, clocking a 1:57.134 right at the end of the session which would earn him second-fastest on the combined times. It also put him a whopping six tenths clear of Sasaki and Tatsuki Suzuki (Leopard Racing), who made an improvement to a 1:57.775.

That was the theme of the second practice session, with only Matteo Bertelle (QJMotor Avintia Racing Team) causing a change to the combined top 14 until the time attacks in the closing minutes.

Toba crashed again, and there was a big crash for Sasaki. The number 71 highsided riding in a group with Masia and Elia Bartolini (QJMotor Avintia Racing Team), with contact made by those following. Taken to hospital in Borgo San Lorenzo, Sasaki was subsequently diagnosed with left and right collarbone fractures and concussion, so he’ll under observation for at least another 12 hours and not take any further part in the race weekend.

Provisional Q2 places
Behind Foggia from FP1, Masia from FP2, McPhee, Sasaki; now out, and Suzuki, Moreira is also into Q2, as it stands, in sixth. World Championship leader Sergio Garcia (Valresa GASGAS Aspar Team) took seventh with a 1:57.921 at the end of the afternoon, and rounding out the combined top 10 are Bertelle on a 1:58.004, from Riccardo Rossi (SIC58 Squadra Corse) and Andrea Migno (Rivacold Snipers Team). Izan Guevara (Valresa GASGAS Aspar Team), who is fourth in the World Championship, will be looking to strengthen his grip on a spot in Q2 tomorrow in FP3 considering he is currently 12th, just ahead of Mario Aji (Honda Team Asia) and Daniel Holgado (Red Bull KTM Ajo).