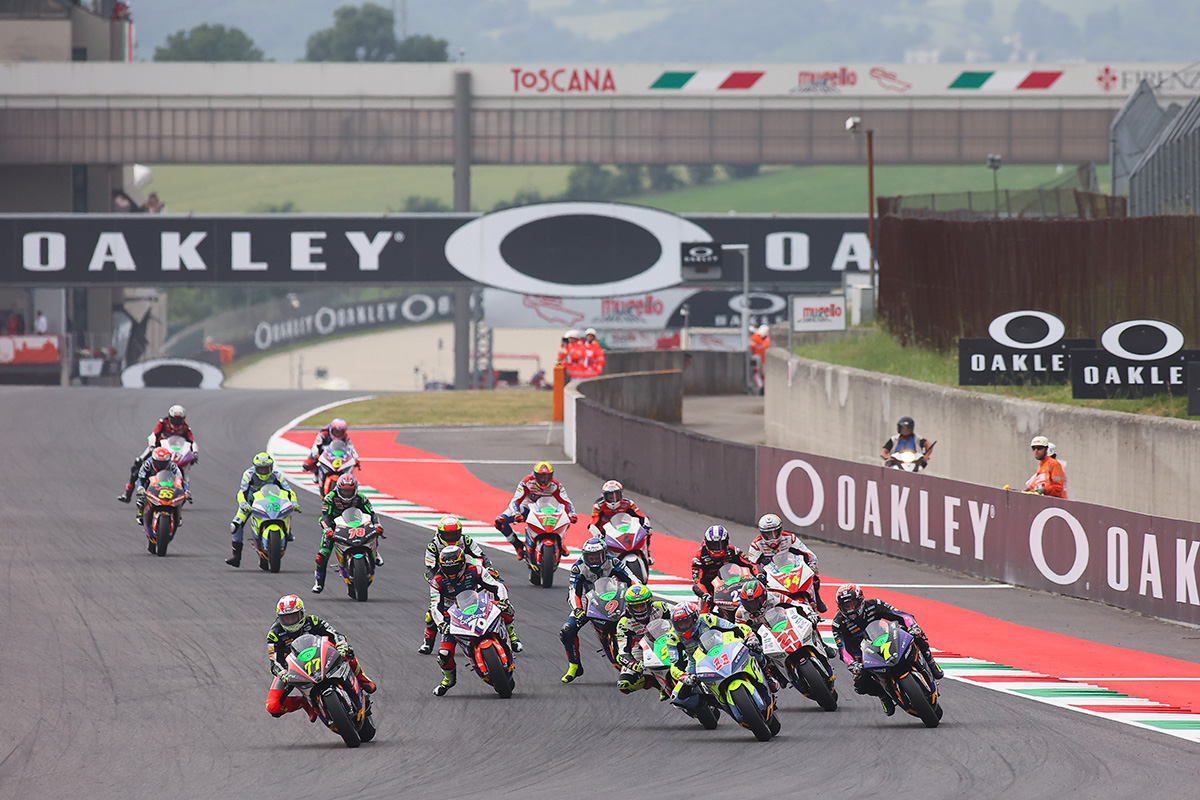 The intrigue began before the race had even started, with riders arriving on the grid on wet tyres before changing to slicks as the rain at Mugello abated. When the lights went out, Kevin Zannoni (Ongetta Sic58 Squadracorse) got the jump from the middle of the front row and led the field up the hill to San Donato, with Ferrari emerging second from the opening corners and pole-sitter Aegerter third.

Ferrari then went underneath Zannoni as they ran through the Arrabbiata corners, as Aegerter and Niccolo Canepa (WithU GRT RNF MotoE™ Team) duelled over third. When they arrived at Scarperia, Aegerter headed down the inside of both Ferrari and Zannoni to take the lead, while a bit of bodywork was sent flying due to some contact behind between Granado and Canepa.

For his trouble, Aegerter was swamped as his rivals slipstreamed him as they ran back up the main straight to start Lap 2, but he reclaimed first on the brakes at San Donato. Granado was slicing his way through the pack too, and he would hit the front when he went underneath the Swiss rider as they turned into Materassi, just down the hill.

It looked like they might form something of a breakaway, but their battle for position mean that Ferrari was back in touch as Aegerter hit back for the lead on Lap 3 at Scarperia. Marc Alcoba (Openbank Aspar Team) emerged as a contender for victory and, astonishingly, he made it a four-wide run up the hill towards San Donato at the start of Lap 4 too. Ferrari emerged in front after all that, from Granado and Alcoba, with Aegerter dropping from first to fourth in a matter of corners.

Despite looking to have made an on-the-run adjustment to his brake lever, and then ceding fourth position to Mantovani, Aegerter refused to give in. He made a big lunge under brakes at San Donato on the fifth and final lap of the race and that put him all the way back into the race lead, with Ferrari in second.

On the drag to the finish line, Aegerter beat Ferrari to another MotoE™ victory by only 0.033 seconds, with Mantovani, who is only riding this weekend as an injury replacement for Bradley Smith, slipstreaming Granado for third as they reached the finish line, the gap between them just 0.007 seconds. But with his DSQ after the fact, it’s the Brazilian who takes 16 points.

A final-lap pass helped Mattia Casadei (Pons Racing 40) to fifth, now fourth, and consigned Alcoba to P5 but the latter was still only 0.983 seconds from the win.

Canepa was next up ahead of Miquel Pons (LCR E-Team), and Zannoni is classified ninth after losing touch with the leading group on Lap 2. Hector Garzo (Tech3 E-Racing) rounded out the top 10 on track, now P9.

Another race win means the Swiss rider has increased his lead atop the FIM Enel MotoE™ World Cup standings, to 17 points over Granado after the Brazilian takes third.