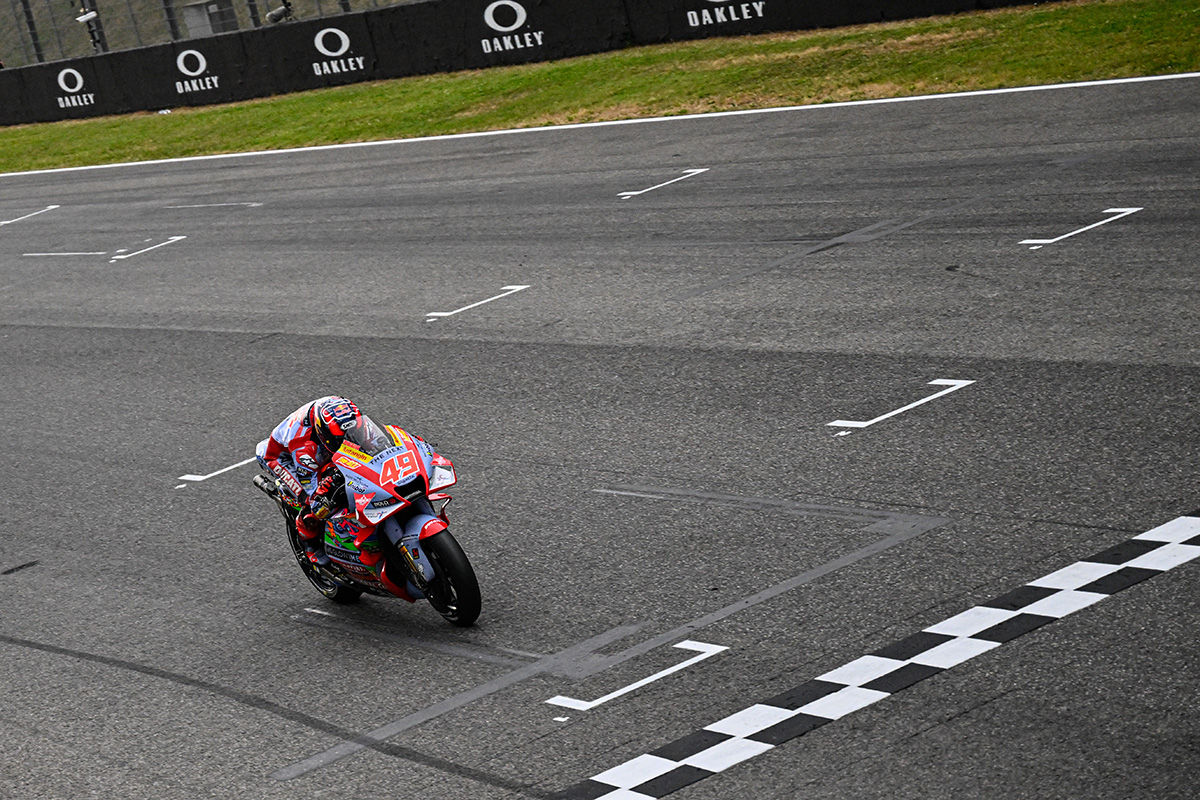 How’s that for a Saturday shake up? Gresini Racing MotoGP™ rider Fabio Di Giannantonio has the first premier class pole position of his career after a dream Q2 session for the rookie home heroes in the Gran Premio d’Italia Oakley. Di Giannantonio set a 1:46.156 with the chequered flag out to head up a front row comprised of three Italians from two Italian teams, riding Ducati’s Bologna bullets. Fellow rookie Marco Bezzecchi was second-fastest and his fellow Mooney VR46 Racing Team rider, Luca Marini, took third after rain came, faded and then left plenty up for grabs on full slicks in Q2.

Q2
Di Giannantonio came through Q1, when the arrival of light rain spiced up proceedings, but it was clear by the end of that session that slick Michelin tyres had to be the choice for Q2 despite the persistent threat of rain. That meant the battle for pole would be less about strategy and more about a straight fight to set the quickest pace in the hills of Tuscany…

After a red flag interruption for a Marc Marquez (Repsol Honda Team) crash, rider ok, Di Giannantonio then kicked things off with a 1:49.124 before moving the marker to a 1:47.163 and then a 1:46.607 on his following laps. The Gresini rider continued to prove the pacesetter until Prima Pramac’s Johann Zarco put in a 1:46.875, but that time would not stack up as the pace continued to hot up.

Bezzecchi got in a 1:46.616, then Francesco Bagnaia (Ducati Lenovo Team) a 1:46.471 and Di Giannantonio a 1:46.410 just before the chequered flag, but Zarco wasn’t done yet. The Frenchman clocked a 1:46.383 to go to provisional pole, before it looked like being a VR46 one-two when Bezzecchi set a 1:46.244 and team-mate Luca Marini moved his time to a 1:46.327. The dream scenario did not quite come to pass for the VR46 squad though as Di Giannantonio subsequently found even more time to take it back.

Zarco qualified fourth, one spot ahead of Bagnaia, which means the best of the non-Bologna rest was Monster Energy Yamaha MotoGP™’s Fabio Quartararo, the World Championship leader taking sixth to lead the resistance.

The Grid
Behind the five Ducatis and a Yamaha, Aprilia Racing’s Aleix Espargaro claimed seventh, although he looked far from pleased.

Joining him on Row 3 will be Takaaki Nakagami (LCR Honda Idemitsu) and Pol Espargaro (Repsol Honda Team), while Enea Bastianini (Gresini Racing MotoGP™) rounds out the top 10 on another Ducati. Jorge Martin (Prima Pramac Racing) qualified 11th-fastest but is set to start 14th as a result of a grid penalty for being slow on the line and disturbing another rider in FP3.

Early, Q2 was red flagged barely more than a minute in as a result of a big crash for Marc Marquez at Turn 2, rider ok but RC213V decidedly not. The machine caught fire and fluid spilt onto the track, necessitating a stoppage so the surface could be cleaned up.

He would later get back out on his second bike and set a personal-best lap time of 1:47.468, but will start 11th due to Martin’s penalty. Ducati Lenovo Team’s Jack Miller similarly moves up to 12th on the grid, the Aussie missing out on advancing from Q1.

Aron Canet (Flexbox HP40) grabbed the Moto2™ pole position at the at the Gran Premio d’Italia Oakley after setting a 1:51.121 in Q2. Canet was just over a tenth of a second quicker than fellow Spaniard Pedro Acosta (Red Bull KTM Ajo) around the Autodromo Internazionale del Mugello, with Sam Lowes (Elf Marc VDS Racing Team) also earning a spot on the front row as the Brit bounces back from being declared unfit to race in France.

Q2
Acosta had achieved his first intermediate class pole a fortnight ago at the French Grand Prix, and the rookie was looking good for two in a row when he set a 1:51.265 and then a 1:51.246 on consecutive laps. However, Canet, who is still not at full fitness after the multi-rider crash three rounds ago, had other ideas and it is he who will start from first on Sunday afternoon, for the second time in four rounds, and just 0.158 seconds covers the top three after Lowes managed to put in a 1:51.279.

While pole gives Canet the best possible chance of chipping away at his 19-point deficit to World Championship leader Celestino Vietti (Mooney VR46 Racing Team), the Italian is far from out of the hunt for victory at his home event. Vietti qualified fourth with a 1:51.381, while wildcard Mattia Pasini (Inde GASGAS Aspar Team) was one of the remarkable stories of Q2. He came through Q1, topping that session, and is now set to line up in fifth on the grid having ridden a Kalex motorcycle which he owns to a 1:51.465. Also on Row 2 will be Ai Ogura (Idemitsu Honda Team Asia), starting sixth.

The Grid
Behind the packed first two rows, Joe Roberts (Italtrans Racing Team) heads up another on the third, from Tony Arbolino (Elf Marc VDS Racing Team) and Jake Dixon (Inde GASGAS Aspar Team). Arbolino had a crash late in FP3 which locked him into Q1, but the man who is fourth in the World Championship boosted his hopes of a solid points haul by making his way out of that first stanza of qualifying.

Row 4 will be Barry Baltus (RW Racing GP), Lorenzo Dalla Porta (Italtrans Racing Team), and Jorge Navarro (Flexbox HP40). A winner at the French GP last time out, Augusto Fernandez (Red Bull KTM Ajo) will have to make a charge from 14th on the grid if he is to go back-to-back. Indonesian GP winner Somkiat Chantra (Idemitsu Honda Team Asia) starts even further back, in 24th, after missing out on passage to Q2 by more than half a second.

Red Bull KTM Tech3’s Deniz Öncü has claimed Moto3™ pole position at the Gran Premio d’Italia Oakley, with Dennis Foggia (Leopard Racing) not quite able to carry his dominance of Free Practice forward. However, Foggia still had a big say in how qualifying played out at Mugello, as it was the Italian who provided the decisive tow to Öncü. Foggia still made the front row, but will start to the outside of the pole-sitting Turk, with rookie Daniel Holgado (Red Bull KTM Ajo) impressing in the middle of the front row.

Q2
There are perhaps few circuits on the calendar where a tow is more important than Mugello, particularly in the lightweight class, and that was how John McPhee (Sterilgarda Husqvarna Max) put himself in top spot in the early stages of Q2 with a 1:57.299. Foggia, on the other hand, was having to punch his own hole in the air, although he managed to go second-fastest in the last few minutes with a 1:57.367.

Then, next time through, Foggia did manage to get the better of the Scotsman as he clocked a 1:57.168. Unfortunately for ‘The Rocket’, he had Öncü close behind him and the Turkish rider used the tow to set an even faster lap. With the chequered flag out, Foggia improved to a 1:57.094 but that was not good enough to knock the Tech3 rider off pole position, nor was it good enough to hold onto second spot as Holgado came through in a bunch of bikes to achieve a 1:56.908.

Jaume Masia (Red Bull KTM Ajo), who is tied for second in the World Championship with Foggia, will be looking to make up ground from 10th on the grid, with Tatsuki Suzuki (Leopard Racing) and Lorenzo Fellon (Sic58 Squadra Corse) also on Row 4. Fellon was another of the riders to come from Q1, making the top four in that session thanks to a triple tow with the chequered flag out.