Pecco Bagnaia to start the #ItalianGP from 5th on the grid, Jack Miller 13th 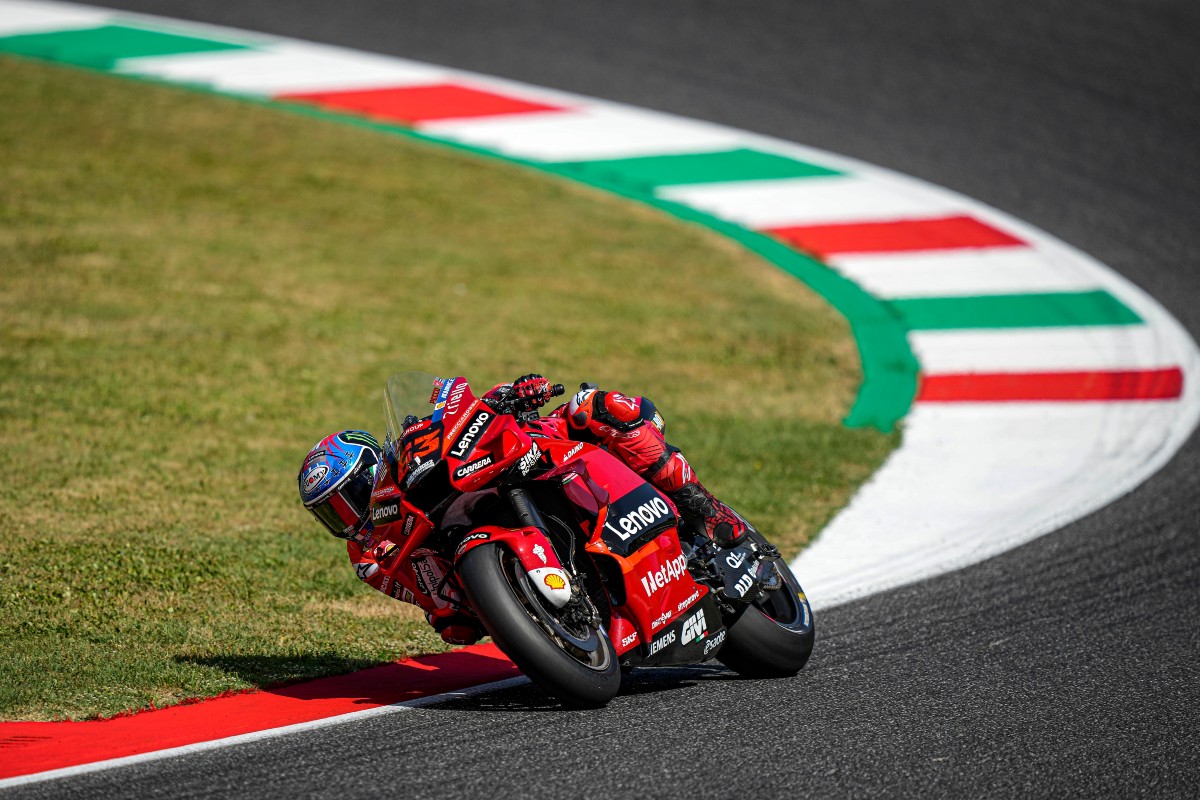 Pecco Bagnaia will start from the second row of the grid in tomorrow’s Italian GP at Mugello Circuit. In a Q2 that was made difficult by uncertain weather and mixed track conditions, the Ducati Lenovo Team rider set the fifth-fastest time In 1:46.471, closing out an all-Ducati quintet. In fact, in the home race of the Borgo Panigale manufacturer, there will be five Desmosedici GPs starting in front of everyone, led by Gresini Racing team rookie Fabio Di Giannantonio in pole position and Mooney VR46 Racing Team duo of Marco Bezzecchi and Luca Marini. Pramac Racing Team French rider Johann Zarco finished fourth.

Jack Miller will be forced to start from the fourth row of the grid in the eighth round of the 2022 MotoGP World Championship. After finishing only 15th in FP3, the Australian rider had to take part in Q1, where he was passed by both Fabio Di Giannantonio and Marc Márquez. Coming out on slicks after several laps on wet tyres, Jack was followed closely by the two rivals who, by taking advantage of the number 43’s references, managed to be just a little faster than Miller and relegate him to third place. The Ducati Lenovo Team rider finished thirteenth in qualifying but will start twelfth as Jorge Martin will have to drop three grid positions as he has been imposed a penalty.

Today’s conditions in qualifying were pretty peculiar, and I didn’t want to risk too much, considering that it was raining at Arrabbiata 1 and 2, and I had already crashed this morning in FP3. Anyway, fifth place is a good result, and my pace for the race is good, as demonstrated by the few laps I was able to do in FP4 before it started raining. We’ll see how it goes tomorrow: the conditions will be very different, with lower temperatures than these two days, but I feel I have a good chance of fighting for the win.

Right at the start of FP3, I had a technical issue that ruined our strategy in terms of tyre plan. The only option we had to do more laps with the second bike was to go out on the preheated tyres, which I had a terrible feeling yesterday. We preferred to wait and only go out with the new tyres towards the end of the session. Although I improved, the time I managed to get was not good enough to get into Q2. In Q1, on the other hand, I was fast on both wet and slick tyres, but I had both Marc Márquez and Fabio Di Giannantonio behind me. Today we were unlucky. Tomorrow will be a difficult race because it’s not easy to overtake here, but we will do our best as always.

The MotoGP riders will be back on track tomorrow at 9:40am for the warm-up, while the Italian GP will get underway at 2pm local time over a 23 lap-distance.

#ItalianGP
Get All Our Latest News Sent Direct To Your Inbox
Join 30,242 other subscribers.
Follow on Social Media
Get the VROOM Podcast