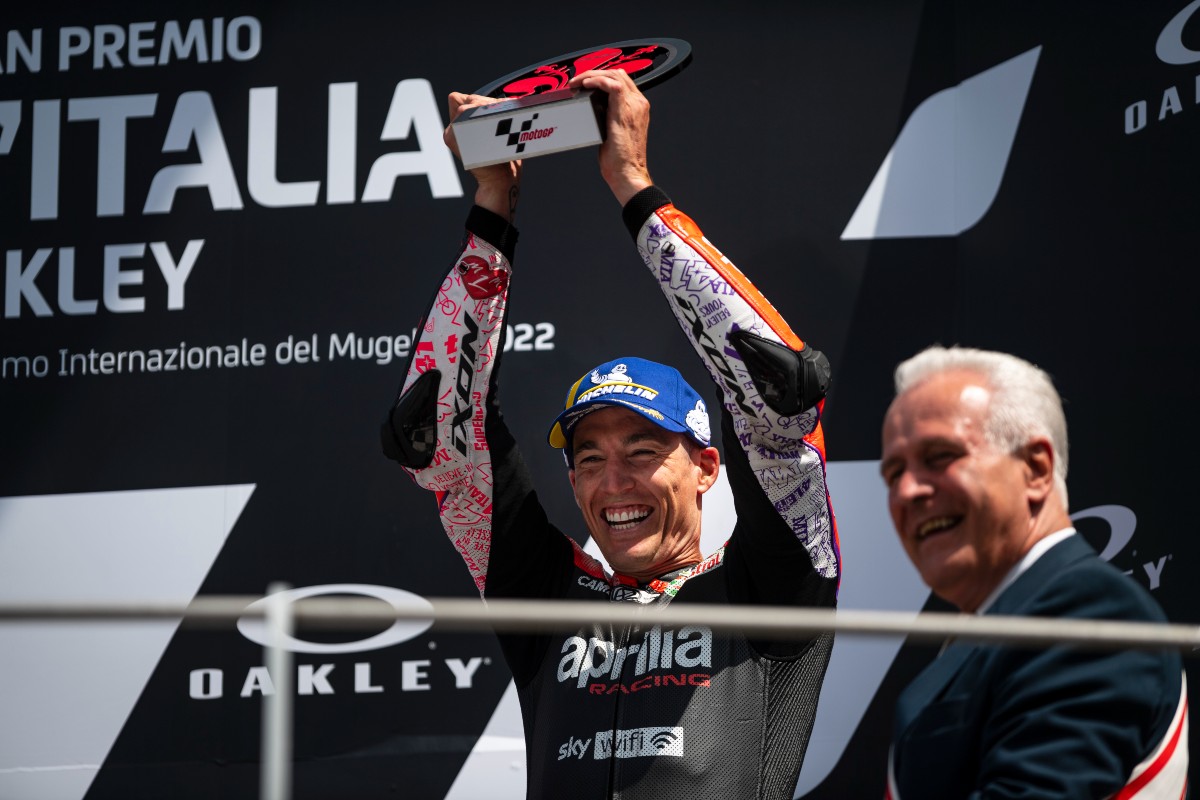 The day of the feared Mugello exam arrived and Aleix Espargaró and his RS-GP passed with flying colours. It was yet another podium, another third place – the fourth consecutive – which solidifies Aleix’s second place in the championship standings, just eight points behind the world champion leader. And for Aleix, there is even room for just a bit of regret because, after losing contact with the leaders in the battle of the early laps, he then had to come back from sixth place. He did it with skill, solidity, and speed, taking home the sixteen points that increase his lead over the third place rider to 20 points.

Despite the fact that his twelfth-place finish does not accurately reflect Maverick’s merits or the state of his Aprilia, Viñales rode what should be considered a positive race. As has already happened in the past, he paid for his bad starting position in the race, but he also demonstrated a pace worthy of the top spots, coming back an amazing 12 positions. Qualifying is clearly the obstacle that stands between Maverick and the prestigious positions in the standings and his side of the garage will be working with the goal of improving his position on the starting grid.

The race closed out a weekend of work and experimenting for Lorenzo Savadori and the Aprilia Racing Test Team. Lorenzo, after a technical problem that forced him to pit, aimed at finishing the race to complete his work which, as the championship results reflect, is proving to be invaluable.

A further source of pride at the end of the Italian weekend, Aprilia consolidates first place in the team classification. A reward for the great commitment of the team from Veneto on the track and of all the technicians in the racing department.

I’m obviously happy with this podium but I must be honest: I would have liked to win today. Maybe if I had been a bit more aggressive in qualifying and in the opening laps, I would have been able to stay closer to Pecco and Fabio. The reality is that all the riders are extremely fast and they don’t make mistakes, so overtaking is not at all easy. But we must not make excuses. We must work hard to keep improving. In any case, it was great to be on the podium for the fourth time in a row and to do it right here in Mugello – in Italy. We’ll see if we can find a little something more next weekend and battle for the win.

When I saw my pace at the end of the race, I was a bit annoyed! Once again, it was my starting position on the grid that penalised me heavily because then in the race I was able to be fast and overtake a lot of riders. On one hand, I find that satisfying but on the other, it shows us that we need to be more ambitious. Because the potential is there. The feeling is improving race after race and we really just need a small improvement to take a substantial step forward and bring home the results we’re missing.

There were quite a few positive points this weekend in terms of our work on the RS-GP and I’m happy about that. Unfortunately, I had a technical problem in the race that didn’t keep me from racing but it obviously kept me from maintaining my pace. In any case, after the pit stop with the tyres cooled down, I was still able to make up ground on the group. Let’s just say that a race battling with some other riders would have been possible. In any case, we need to look at the glass half-full and at an Aprilia that continues to be competitive!

#ItalianGP
Get All Our Latest News Sent Direct To Your Inbox
Join 30,242 other subscribers.
Follow on Social Media
Get the VROOM Podcast