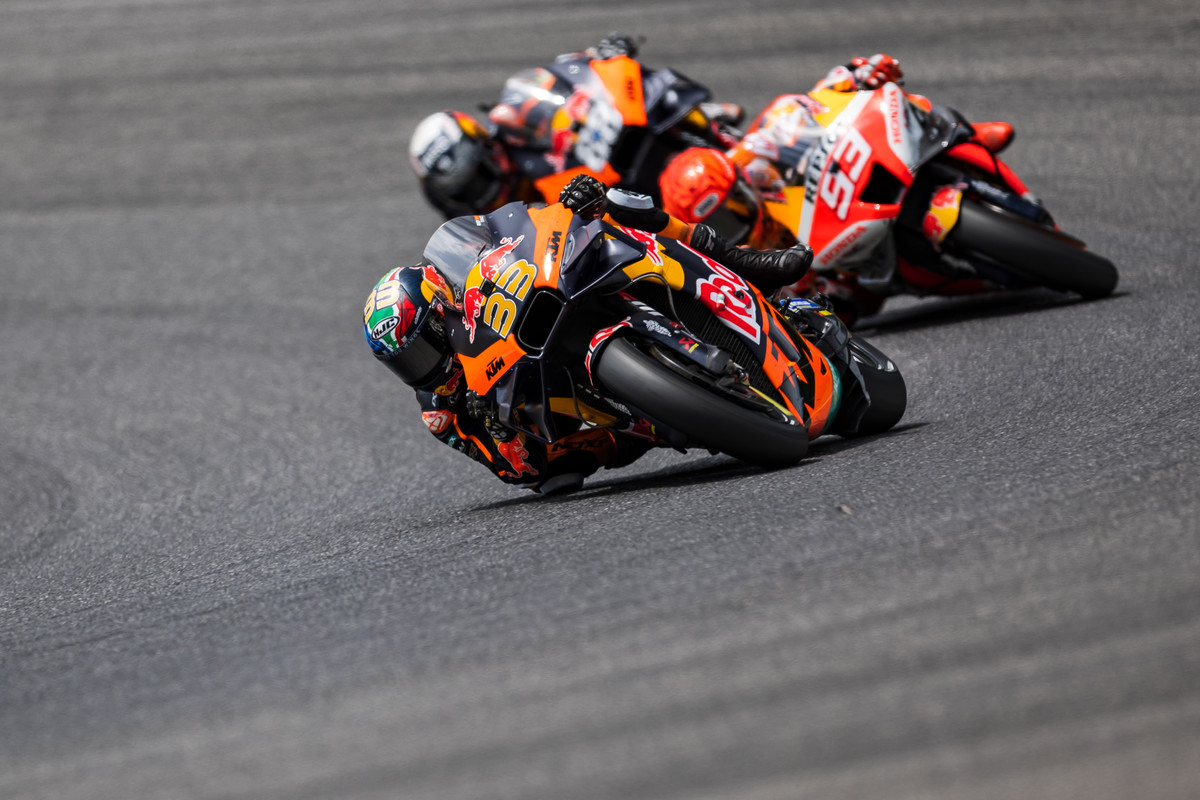 Red Bull KTM Factory Racing left the confines of the scenic and speedy Mugello circuit with both riders making substantial recoveries from their grid positions. It was Brad Binder who shone especially at a cloudy Gran Premio d’Italia Oakley for the eighth outing in MotoGP this year as the South African pulled from 16th up to 7th.

The 36th Italian Grand Prix at Mugello finally settled on a cool and partially cloudy climate. The teams and riders had circulated the 5.2km venue during high heat and sunshine on Friday and Saturday morning before thunderstorms created a chaotic qualification period on Saturday afternoon. Miguel Oliveira and Brad Binder started the 23-lap race from the fifth and sixth rows of the grid with the Tech3 KTM Factory Racing duo a little further behind.

The change in the metrological conditions helped the crews manage tire choice and pressure for the high-paced chase and the threat of more showers did not arrive. It was Binder who made the better start at 14.00 on Sunday. The #33 bike ploughed through the group and into the top ten. Binder then charged hard to latch onto the bunch fighting for the last podium spot and reached the back of Luca Marini. He was less than two tenths of a second from the top six at the finish line and only four seconds from the victor Francesco Bagnaia.

Oliveira also rode brightly and with similar pace to his teammate. His 9th position was a mere 11 seconds from P1 and represented his first top ten classification since his 5th place in Portugal and his third of 2022. Tech3 KTM Factory Racing’s Remy Gardner completed the distance in 19th while Raul Fernandez was 21st after experiencing some rear tire issues.

The diverse collection of curves and challenges contained by the Circuit de Barcelona-Catalunya will be the stage for the Gran Premi Monster Energy de Catalunya next weekend followed by a one-day IRTA test.

Brad Binder:
“It was a weekend full of ups-and-downs. It was a challenge to find something that I could understand and getting comfortable on the track wasn’t easy. After warm-up this morning however I had a clear idea of what I needed to do to make a step and have a good race. The team did a great job to give me that possibility. I felt strong, especially in the last ten laps. We still need to work on our speed and pace with new tires. I lost time at the beginning but could pull it back by the end. I’m also a bit frustrated today because I know we could have done a bit better than what we did. We just didn’t have the speed at the start but we do have a lot of data now from the changes we made this weekend and I hope that will help us for next weekend in Barcelona.”

Miguel Oliveira:
“A nice race and we could be competitive. I found my rear grip dropping a lot, more than I expected and that affected my pace. I think I could have finished nearer the group ahead. Anyway, we got a top ten position and that was important for me and the team after the non-score in Le Mans. I am going to Barcelona motivated and eager to do better.”