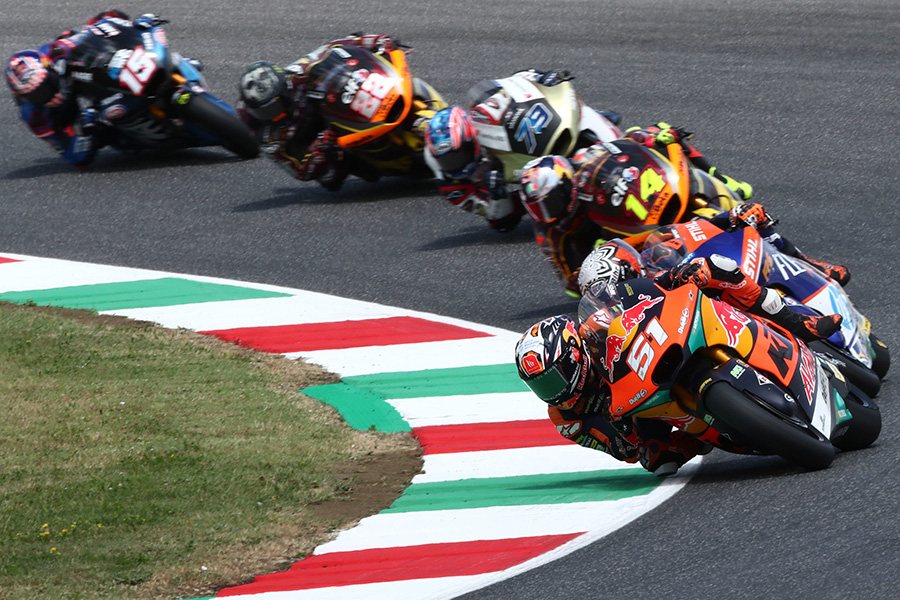 The Moto2 Italian Grand Prix was dominated from start to finish by Pedro Acosta, who became the youngest rider in history to win a Moto2 race. His seventh Grand Prix victory of his career came in the same race as teammate Augusto Fernandez finished fifth, after having made a spectacular fightback from 24th place.

Acosta made a great start, from the front row, taking the lead holeshot and setting a high pace, despite the fact that the track conditions were different from those previously experienced during the weekend. Only one rider was able to follow him, but crashed out at the halfway point. From that moment on, Acosta rode alone, taking his first Moto2 win and crossing the finish line 4 tenths ahead of his nearest rival.

Fernandez, who started from 14th, dropped down to 24th, before steadily regaining feeling and riding at the same pace as the front group. The Red Bull KTM Ajo Moto2 talent continued to climb places, lap after lap, becoming more comfortable and reaching the Top 10. He finally finished fifth, concluding a spectacular 19-place improvement.

Fernandez is now sixth in the Moto2 World Championship, with 80 points. Acosta is 10th with 45 points. The season continues next weekend at the Catalan Grand Prix, held from June 3rd-5th.

#37 AUGUSTO FERNANDEZ
“We didn’t have a good first lap. I lacked speed and the rest of the riders were very fast. Little by little I felt better, and I managed to have a good pace. I had a lot of fun and I’m very happy with the comeback that we made. I was close to fourth place, and I had a very good feeling. In the end we salvaged something from the weekend, and we got some important points that mean a lot for the championship. Next week we are going to Barcelona, which is a circuit that I really like, so we will give it one hundred percent to try to get a good result.”

#51 PEDRO ACOSTA
“I am very happy to have finally got this victory. It took more than I would have liked, but the difficult times help you learn and enjoy the good moments even more. The race was tough; it is the first contest that I’ve led from start to finish, and I had to work hard to stay focused. The mistakes we made at previous rounds have helped us learn, progress and be here today.”