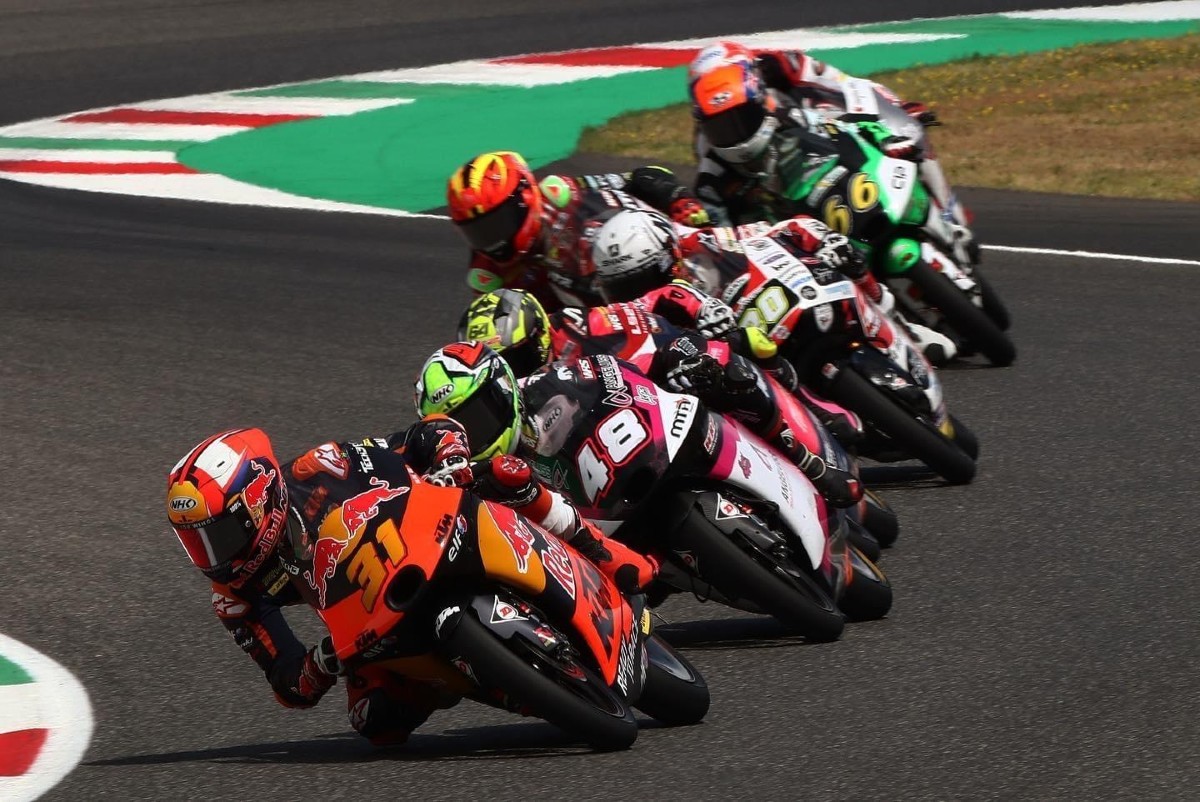 Red Bull KTM Tech3 was eager to take the start of the Italian Grand Prix at the beautiful Autodromo Internazionale del Mugello on Sunday. Indeed, hopes were high as Deniz Oncu took his second pole position of the season on Saturday and was therefore set to start from the front, while Adrian Fernandez was starting from the seventh row.

With the rain having hit the area around the circuit overnight, the conditions were quite different today from what the riders got used to over the last two days. After an impressive qualifying day on Saturday during which he reached his second pole position of the season (the first one was in Portimao earlier this year), Deniz Oncu set off for the ten minutes of the allocated warm up time on a wet track. Set to start on pole, he was also the fastest this morning in 2’07.234. When the lights went out for twenty laps, the young Turkish took a really good start and maintained the front for the first laps with a solid pace. As per usual, he started to have great battles for the first spots with his weekly opponents Dennis Foggia, Izan Guevara and Tatsuki Suzuki, with regular positions changes between each other. Unfortunately, our hearts were broken and hopes went into smoke when he was put down in the twelfth lap by Suzuki who did not keep his trajectory and pushed Deniz, who crashed. The rider was fairly given a long lap penalty for irresponsible riding. Oncu jumped back on his bike and did his best, but he was too far to do better than a fifteenth position. Difficult result to swallow for the Red Bull KTM Tech3 crew, who will look forward to erasing this result next week in Barcelona.

On the other side of the garage, there was a good atmosphere this morning after a positive Saturday for Adrian Fernandez who keeps progressing within his new team. He missed out on Q2 by only a few seconds and was starting from the seventh row today, in P19. He took a rather good start to maintain his position, and progressively grabbed positions as the laps went by, feeling comfortable on his KTM and with his race pace. The few crashes at the front helped him of course, but he kept his focus and remained regular. Pitito passed the line in tenth, his first top 10 of the season, a good and promising result for the youngster after some difficult weekends. He registered his best result of 2022 so far, and will be looking forward to continuing his progression when we head to Barcelona for the Catalunya Grand Prix, in just one week’s time.

Tough conditions for the warm up this morning as it rained overnight and the track was wet. We managed to adapt anyway and worked well. For the race, I took a really good start and remained calm and focused despite some crashes at the front. I had a good feeling all race long, I was fast and regular. This is a good result for my team and myself, I am really happy so I would like to thank them for their work. I look forward to heading to Barcelona next week.

We had high hopes here in Mugello as we were starting from the pole position and I was so motivated to be doing a good result. I took a really good start, was feeling good on the bike and had a good rhythm, but unfortunately I was hit by another rider and pushed. I managed to get back on the bike and finished in P15, grabbing one point that can be important later. I am angry because I could have done a very good result, but we will try to do better next week in Barcelona.