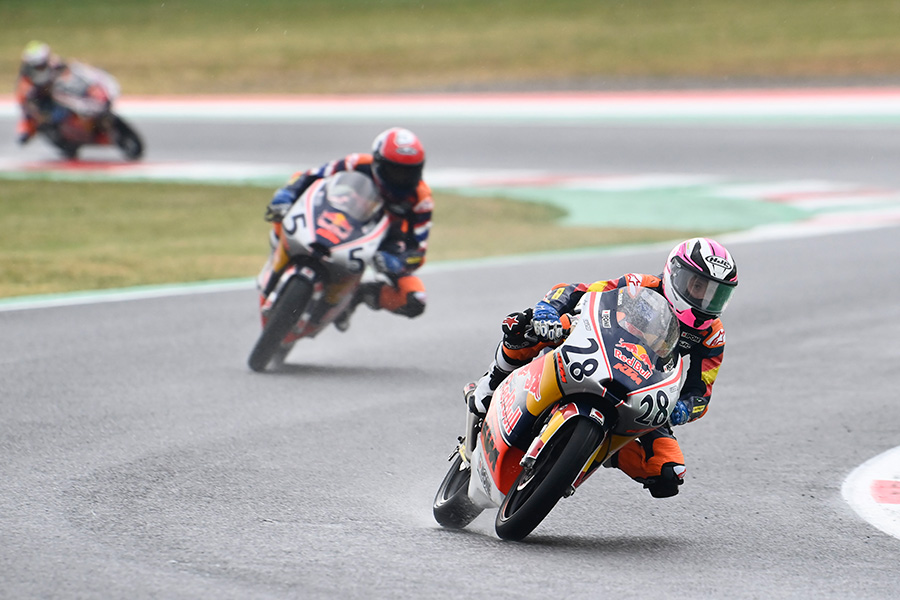 Max Quiles showed himself the master of the most treacherous conditions to take a superb wet Red Bull MotoGP Rookies Cup Race 1 victory in Mugello. The 14-year-old Spaniard kept his head while those around, and mostly in front of him, were losing theirs. Second was 21-year-old Thai Tatchakorn Buasri with Finnish 14-year-old Rico Salmela holding off Spanish 15-year-old Angel Piqueras for 3rd.

It was a contest of attrition with Gabin Planques, Casey O’Gorman and Cormac Buchanan all leading but falling.

“I come from Murcia and there it never rains, it’s always hot,” he laughed. “It rained at the test in Portimão and I remembered some things from that. So actually I was quite comfortable in the wet. In the last few laps I slowed so that I would not crash or anything like that and I am really happy to win.”

“I wanted to win and I was pushing to win. When I was catching the leaders I was really determined and if they had not crashed I would have tried anyway. I knew that I could catch them, at least I was going to try.”

“Tomorrow it can be wet or dry I don’t care, my objective is to be quick whatever the conditions.”

Buasri has prepared for this

“Yes I am so happy with that, great to get on the podium this year. I have a lot of experience in the rain, we have plenty of it at home. I use it to train, I train on slicks in the wet to get the feeling of the bike sliding so I am used to it.”

“When Max got ahead I managed to get in front again but I could feel the bike sliding and realised it was on the limit. My set-up didn’t seem to be quite working as well as his in the conditions so I realised I should not take the risk of trying to race him. I told myself to calm down and I settled for 2nd.”

Salmela had it sorted, ending with the fastest lap

“The race was pretty good, at the beginning I didn’t want to make any mistakes so I just tried to relax and not crash. Later, towards the end of the race I started pushing and catching up positions.”

“It was unlucky that Eddie crashed on the last lap and I got P3 but I was going so fast the last laps, catching so much. I am so happy with the podium, I want to thank everyone who supports me. For tomorrow I don’t mind so much if it rains but I like more the dry, it is more comfortable.”

O‘Shea came from the back

“Before the start of the race my clutch cable broke and the mechanics did a great job of getting the spare bike ready for me so I could start but I had to go off the back of the grid and on a bike that I didn’t know,” explained the 15-year-old Briton.

“The first few laps were tricky but I started to work my way through the pack and I had a very good feeling and I got into P3 and held it there with a big big gap behind me.”

“Going onto the last lap I came out of the final corner and felt that the rear tyre was so strange, I went on the kerb and the rear was moving a lot. Into turn 1 and the rear tyre was still feeling strange, Went into Turn 2 and had such a strange crash, off the gas. It turned out that I had a puncture, nothing I could do about that. Just thanks to the team for getting me out there after the clutch problem.”

“The conditions were very very difficult and it was hard to get a good feeling from the bike. It was important to get some points. I hope for a dry race and I will push for a lot more,” promised the 16-year-old Spaniard.

Buchanan takes the positive from leading for 3 laps

“Very disappointed, this was a great opportunity for me. I saw the gap come down a little bit and I tried to push a little more but not too much, I just went into the corner the same as usual and tucked the front,” admitted the 15-year-old Kiwi. “Devastated but we showed the potential and tomorrow we’ll try again.”

O’Gorman led 2 laps and did nothing wrong

“It’s a big shame I felt good on the bike, I was not pushing too hard, it felt really good, I looked at the temperature and it was way down to what it should be because of the rain and then as I got on the throttle, it stuttered a bit and the back end came round and I couldn’t save it,” explained the 14-year-old Irishman.