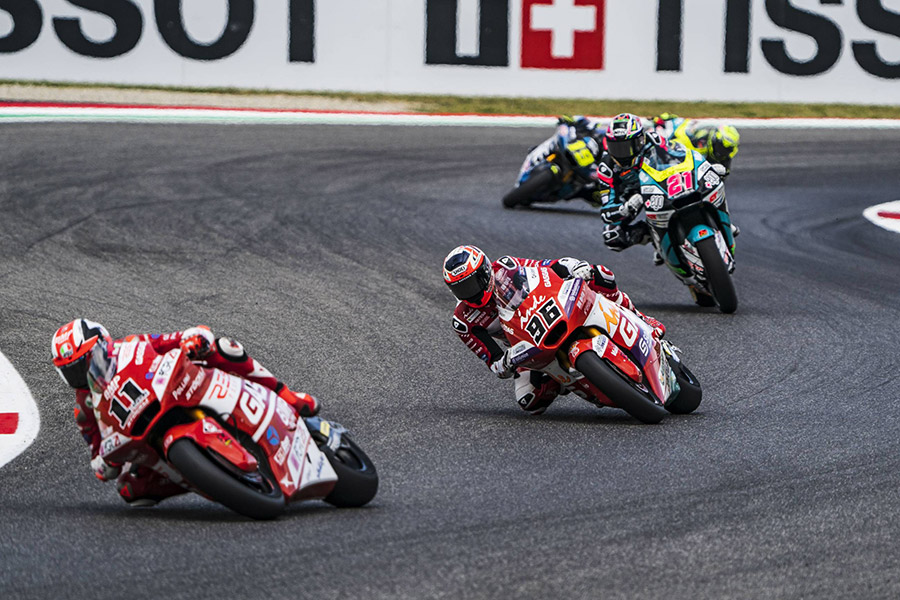 Inde GASGAS Aspar has once again scored points in the Moto2 category, after two DNFs in France. Jake Dixon was sixth in the Italian Grand Prix, after a tough race in which he had to make up positions after a hesitant start. His teammate Albert Arenas has re-entered the top 10 in what was his 100th World Championship race.

Mattia Pasini, who was racing at Mugello as a wildcard rider, was unable to translate his fifth position on the grid into a similar result in the race after finding a tyre that did not deliver the performance he expected. Despite everything, he has been able to fight with riders who have been competing all season and takes a point by finishing fifteenth. With these results, Jake Dixon is close to the top 10 overall, while Albert Arenas climbs to fifteenth position in the standings.

6th Jake Dixon (+12.513):
“Difficult weekend but overall, the race was not so bad. I hadn’t finished the last three races so I was a bit nervous at the beginning here and I had to come back from a long way. Not bad, and something to build-on for Barcelona.”

10th Albert Arenas (+14.748):
“It was a really complicated start to the race with a mess into the first corner and then into the first chicane there was contact with other riders and I lost some positions. I was around 21st and could recover to make another top ten with a good rhythm. I’ll take that from today. I could make places and learn things. The team worked so well and we’re we making progress every session.”

15th Mattia Pasini (+18.750):
“I’m very happy, although a little hurt because we got a tyre that didn’t give us the performance we expected. We showed our speed and we didn’t make any mistakes. We could have been sixth or eighth, although I lacked the aggressiveness at the end of the race after so much time away. Fighting with riders like Augusto Fernández, who won the last race, was nice”.