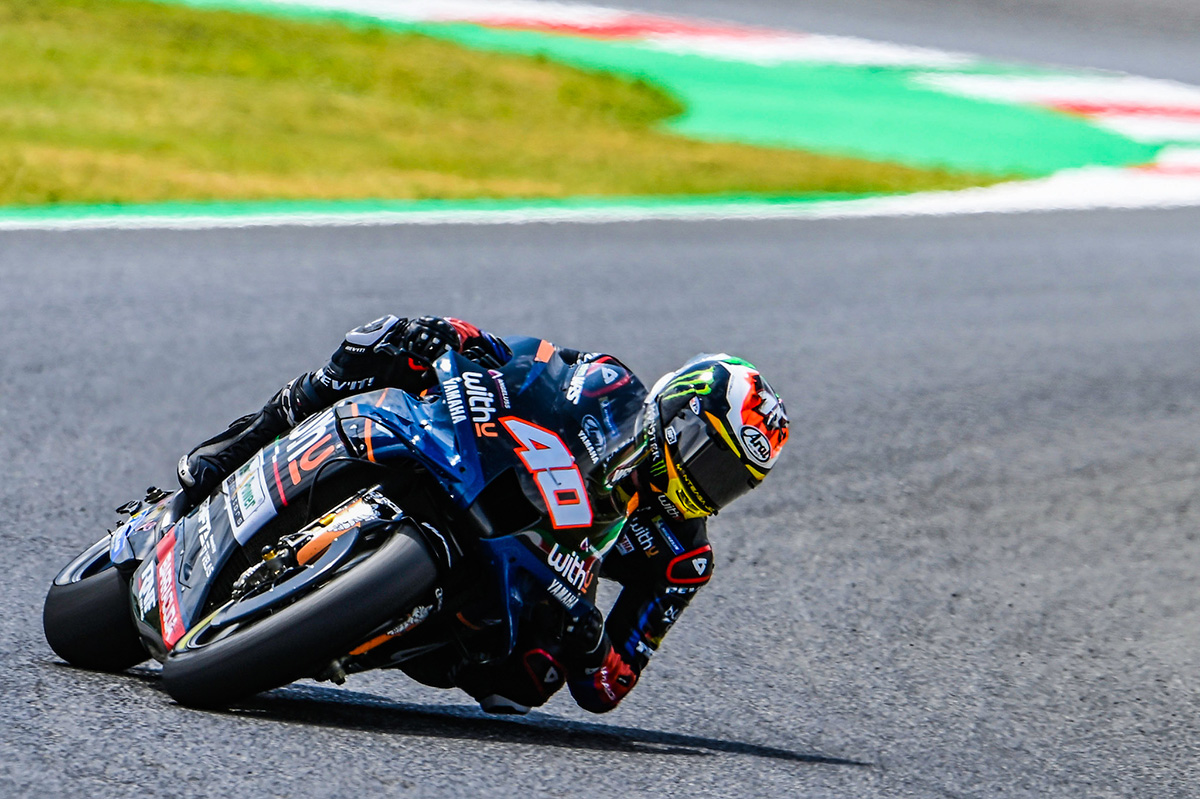 The WithU Yamaha RNF MotoGP Team leaves the eighth round of the 2022 MotoGP World Championship with mixed feelings. While Darryn Binder showed a good performance at the Italian Grand Prix, Andrea Dovizioso could only try to get the best out of his home race.

After he enjoyed riding at the Mugello Circuit from the first minute on, Binder scored his best starting position in the premier class to date with P20. Once again, South African had a rocket start and made up three positions on the first lap. But after he crashed under yellow flag in FP3 yesterday, he had to do a long lap in the third lap of the race, which threw him back to P22. But in only one lap he managed to recover three places again, had a solid pace and therewith came closer and closer until he even passed his Yamaha colleague Franco Morbidelli on the final lap to see the chequered flag in 16th, finishing on the rookies podium again.

On the other side, Dovizioso didn’t play his cards well in Qualifying on Saturday. In mixed conditions he opted for rain tyres while most of his contenders went out on slicks. Therefore, he had to line up in P26 on home soil. Yet, he recovered some positions at the start, finishing the first lap in P23. In the course of the 23 laps race, he kept his pace and benefited from DNFs in front. The Italian eventually crossed the finish line in 20th position.

In just a few day’s time, the WithU Yamaha RNF MotoGP Team will be back in action for the ninth round of 2022 at the Circuit de Barcelona-Catalunya, in Spain.

“It was a good race for me. I’m really happy with how things went. I managed to get a good start and in the first couple of laps, I was in quite an alright position. Unfortunately, I had to take a long lap, which lost me a couple of seconds, but I managed to come back in and fight my way up a little bit further. I had quite a good pace throughout the race. I feel like I’ve made a step forward in the right direction. I’ve found that front feeling that I was looking for, and I was able to just ride the race like how I wanted and push every lap and be precise. I was really close to the points, I feel like if I didn’t have to do the long lap, I would have scored points today. But overall I think I did a good job this weekend.”

“Today, I was struggling with the speed in the corners. I really didn’t have the pace from the first lap, so I couldn’t stay with the two Yamaha as that was the plan. I’m very disappointed with that. I couldn’t try the hard front tyre in the practice, maybe it was a bit better because they were using that. In any case, I was struggling for not being able to be faster in the way the Yamaha requests it, so it was far from ideal.”