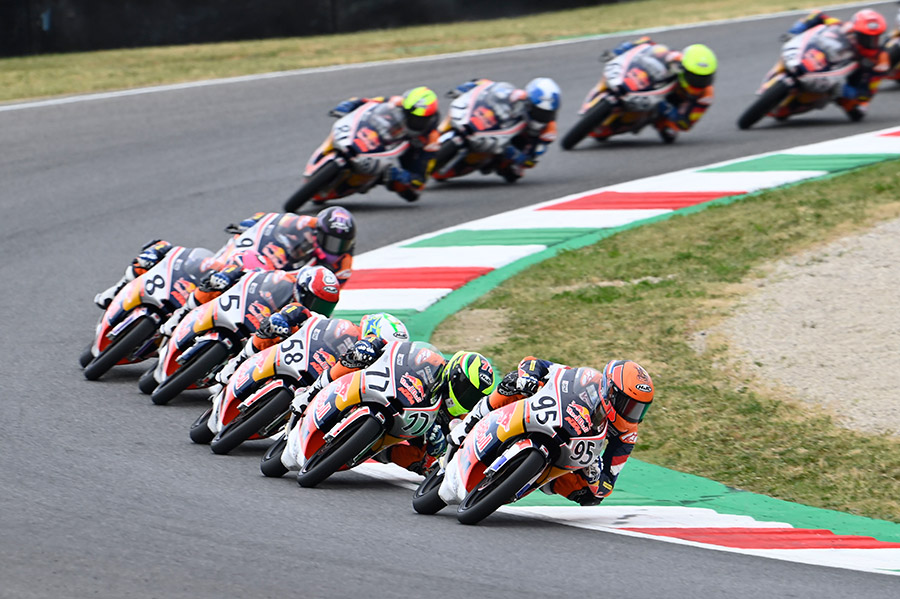 Collin Veijer flicked out of the slipstream of Filippo Farioli’s KTM and willed his identical RC 250 R alongside and ahead as the pair led a pack of 13 Red Bull Moto GP Rookies across the Mugello finish line covered by just 2 seconds.

It was a masterly performance by the 16-year-old Dutchman who was never too far from the front along with pole man Farioli the 17-year-old Italian.
It had been one of the truly great Cup races and third went to Tatchakorn Buasri, the 21-year-old Thai by just 1 thousandth of a second over 15-year-old Briton Eddie O‘Shea.

The conditions were so different to Saturday’s soaker and 15 laps in virtually perfect conditions allowed the youngsters to produce their best with no one coming close to breaking away and places swapping many times every corner.

“I knew what I wanted to do on the last lap. I thought I could get far enough ahead that they would not be able to catch me before the line. I had tried it a few laps earlier and I thought it was possible.”
“So I went for it on the last lap to make a gap but then Filippo came past and I thought, ‘well maybe that is not so bad,’ and I got in behind him and concentrated on making a perfect run through the last corner and into his slipstream.”
“I had no idea how close the others were behind me I was just concentrating on Filippo. It is great to get the win. I had tried to break away but I was running long gearing and I couldn’t do it, a great race.”

Farioli with a beautiful ride

“The start was not so bad, the first lap was good. After I saw that it was not possible to escape from the other riders, I stayed in the group, made a good management of the situation. In the end I finished 2nd, I was in front through the last corner but Collin did a very good job to exit fast and passed me.”
“Coming to the last lap I realised I had good pace in the second part of the track and I thought, OK I will pass Collin after the Arrabbiata. But after I did they stayed with me, he exited faster from the Bucine and he won. The Strategy was good but in the end I was 2nd. I am very happy, I must congratulate Collin and thank everyone who helps me.”
“It was a fantastic weekend. I was fast in practice and took Pole but yesterday was a difficult race because it started to rain just as we took off the tyre warmers. It was very difficult and I crashed first lap but after made a good comeback.”

Tatchakorn Buasri saved it until the end

“My plan today was really only to push on the last lap, because there was so much overtaking going on that I could try and lead but it was impossible to break away and I knew the race would only be decided on the last lap.”
“I tried to get in the right place on the last lap and I made it to 3rd place. Not bad for me,” he added with his broad grin, the only rider to be on the podium in both races.

Eddie O‘Shea so close to the podium

“It was definitely the best race of my European career so far. I managed to stay in the front group the whole race, I was comfortable in P5, P6, I was comfortable overtaking on the brakes and the bike felt near perfect and I’d like to thank all the team for that.”

“I came out of the final corner 5th, I dragged Tatchakorn and Filippo for 3rd and Tatchakorn beat me by 0.001 I believe. I am happy to take 4th but I’m more happy that I am gutted not to get on the podium.”

“It was a very beautiful race, it is fantastic to ride here in Mugello and I enjoyed the race a lot, so much overtaking and I think this is one of the most enjoyable races I have ever made. I can’t wait to get to Sachsenring, I want more,” enthused the 16-year.old Italian.

José Rueda lost the run in to the line

“The race was OK, but not too much,” chuckled the 16-year-old Spanish points leader who is now just 5 ahead of Veijer. “Normally I would like to have more points for the championship. On the last lap, in the last corner I came out in 3rd position and then finished 6th,” he laughed. “That’s how it goes on this track, it’s crazy. The bike was good I enjoyed the battle but….”

Max Quiles could not repeat

“In the last corner I was going to overtake, I was P8, I was on the inside and when I tried to open the gas the front tyre slid away and I went down. I was trying to get the good drive out and overtake in the straight before the line but….” shrugged yesterday’s winner, the 14-year-old Spaniard.