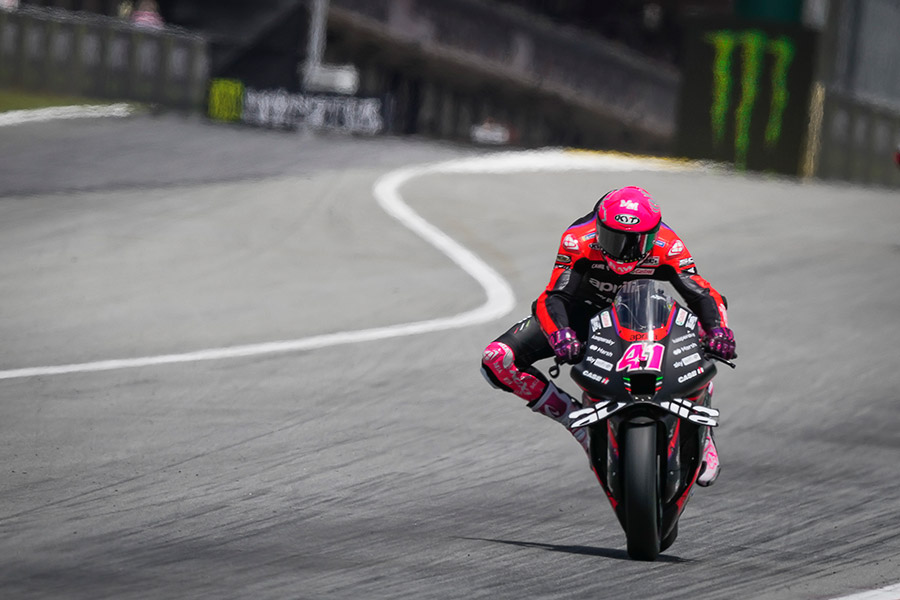 Aprilia Racing dominated the opening day at the Gran Premi Monster Energy de Catalunya, with Aleix Espargaro clinched top spot ahead of teammate Maverick Viñales. The pair were split by three tenths after sharing the lead of the timesheets throughout FP2, with Gresini Racing’s Enea Bastianini the Noale factory’s closest challenger in third.

FP1
Alex Rins (Team Suzuki Ecstar) was fastest in FP1, putting in a 1:40.101 in the final few minutes of the opening session at the Circuit de Barcelona-Catalunya and backing that up with a 1:40.185 as he greeted the chequered flag. Like Rins, Viñales finished the session on new medium compound Michelin tyres, front and rear, and consolidated second on the timing screen with a 1:40.296 on his final lap to sit second.

Franco Morbidelli (Monster Energy Yamaha MotoGP™) had been the early pace-setter as the Italian showed strong form, and the 1:40.695 set on his first run put him third when the music stopped. Aleix Espargaro, who has now finished third for the last four MotoGP™ races in a row, took fourth with Repsol Honda Team’s Pol Espargaro making it for different manufacturers in the top five, heading a Honda trio continued by Takaaki Nakagami (LCR Honda Idemitsu) and Alex Marquez (LCR Honda Castrol).

World Championship leader and newly re-signed Monster Energy Yamaha MotoGP™ rider Fabio Quartararo was back in P14 and right behind him was the man who reignited his title bid with victory a week ago at Mugello: Francesco Bagnaia (Ducati Lenovo Team).

FP2
Noale fought back in the afternoon, with Espargaro taking over at the top with 20 minutes remaining to displace Rins. With seven minutes left we saw the first rider stick some soft rubber in, with Viñales deciding it was the moment for a time attack.

The Spaniard put it to good use to steal top spot from his teammate, and Top Gun then found another two tenths on his next lap, posting a 1:39.705. The Ducati trio of Francesco Bagnaia (Ducati Lenovo Team), Bastianini and Martin all had a go at trying to better Viñales but all three failed in their quests.

Then, with the chequered flag out, Aleix Espargaro snatched the honour of Friday’s fastest with a blistering 1:39.402 – just half a second shy of Fabio Quartararo’s (Monster Energy Yamaha MotoGP) outright lap record from 12 months ago. That made it a 1-2 for the Aprilia teammates to start the weekend, as both Espargaro and Viñales look to repeat their Catalan heroics after taking 1-2 on the grid whilst riding for Suzuki at the 2015 Catalan Grand Prix.

Provisional Q2 places
Behind the two Aprilias comes Bastianini, with the ‘Beast’ 0.488 off the top to lead the resistance. Bagnaia secured fourth overall, with Martin in fifth and only four hundreths further back. A strong final flying lap from Brad Binder (Red Bull KTM Factory Racing) saw the South African then jump up to sixth on the timesheets, pushing Jack Miller (Ducati Lenovo Team) down to P7.

Quartararo moved up to P8 in FP2, but overall Rins’ FP1 table topper is quicker and that puts the Suzuki rider in eighth. Quartararo is relegated to ninth, just ahead of a resurgent Morbidelli, who is the last currently on to move through to Q2.

Stefan Bradl (Repsol Honda Team) was the only crasher, rider ok as he gets back into the racing groove in place of the recovering Marc Marquez.

FP1
Canet put his Mugello frustrations behind him early doors by topping FP1, ending the session 0.024 clear of compatriot Fernandez. Dixon made it an incredibly close top three, just 0.079 seconds adrift in third, with the top three not set to change. Incredibly, yhe top 19 riders were split by just under a second.

FP2
Joe Roberts (Italtrans Racing Team) struck late to deny Canet the chance to top both the day’s sessions. The Americas was just over a tenth clear of the Spaniard, with Mugello winner Acosta in third and only another 0.076 off.

Lorenzo Dalla Porta (Italtrans Racing Team) impressed in fourth, as did Lopez in fifth as the rookie newcomer continues to impress.

Championship leader Vietti was pipped by Ogura as they are both currently set to move through, with Dalla Porta in P13 and Filip Salac (Gresini Racing Moto2) the last on to join them as it stands.

FP1
Guevara set the pace in FP1, clocking a 1:48.675 in the closing minutes of the opening session at the Circuit de Barcelona-Catalunya. Holgado moved to second with the chequered flag out when he set a 1:48.870, pushing Foggia back to third.

The 40-minute session was mostly incident-free although Carlos Tatay (CFMoto Racing PrüstelGP) was seen in the gravel – upright – at Turn 5 before setting a 1:49.451 which was good enough to be classified eighth. Deniz Öncü (Red Bull KTM Tech3) had a late spill at Turn 1 – rider okay – having logged a 1:49.919 which saw him ultimately classified 14th.

FP2
Guevara was once again the rider to watch, but the gap between the number 28 and Foggia was only 0.023 by the end of play. Suzuki was third quickest ahead of Ryusei Yamanaka (CFMoto Racing PrüstelGP), with Kaito Toba (CIP Green Power) completing the top five 0.351 off the top.

Provisional Q2 places
It’s Guevara on top ahead of Holgado from their FP1 times, with Foggia and Masia next. Suzuki is fifth thanks to his FP2 best, ahead of fellow afternoon improver Yamanaka.

Andrea Migno (Rivacold Snipers Team) is seventh overall, ahead of Toba. Garcia is ninth on the combined timesheets, with Öncü, Ivan Ortola (Angeluss MTA Team), Tatay and recent debutant David Muñoz (BOE Motorsports) next up. The final rider to move straight through to Q2 as it stands is Riccardo Rossi (SIC58 Squadra Corse), but it could all change in FP3.