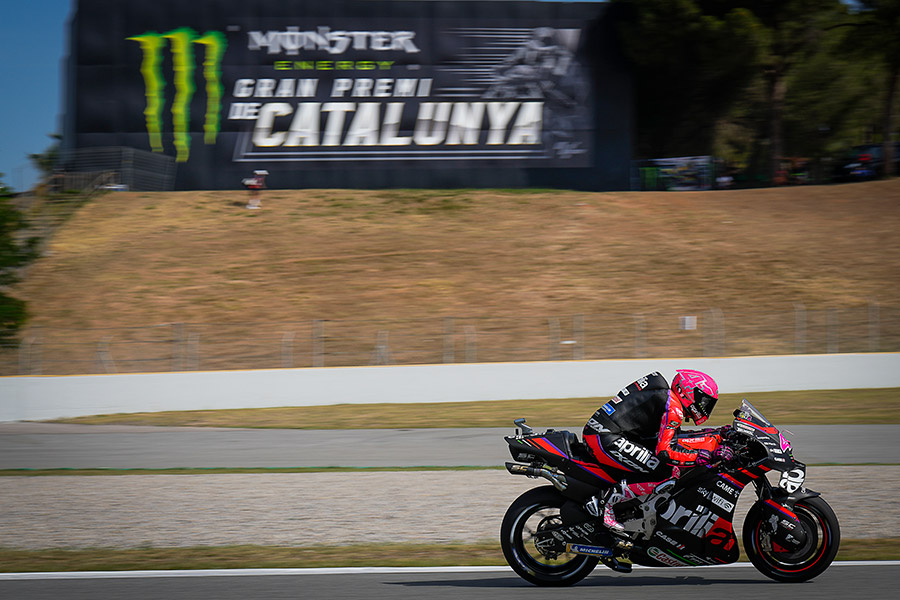 Aprilia Racing’s Aleix Espargaro reset his own All Time Lap Record to claim pole position for the Gran Premi Monster Energy de Catalunya, coming out on top in a three-way fight for pole in MotoGP™ Q2 at the Circuit de Barcelona-Catalunya. The Aprilia rider’s 1:38.742 saw him prevail by just 0.031 seconds over Ducati Lenovo Team’s Francesco Bagnaia, with World Championship leader Fabio Quartararo (Monster Energy Yamaha MotoGP™) also set to start from the front row on Sunday afternoon after ending Q2 less than two tenths further back.

Q1
Q1 saw Maverick Viñales (Aprilia Racing) prevail, with the fight going right to the wire and Takaaki Nakagami (LCR Honda Idemitsu) snatching second, and the final spot in Q2, from rookie sensation and Mugello front row starter Marco Bezzecchi (Mooney VR46 Racing Team). From there, it was on to Q2 with both Aprilias…

Q2
It was tight at the end of the first runs, with Quartararo top on a 1:39.055, Bagnaia second at just a hundredth of a second off the pace, and Aleix Espargaro only two thousandths slower again in third.

While track temperature was approaching 60 degrees Celsius, the pace was just as hot when riders came back out for their second runs. Bagnaia raised the stakes when he punched out a 1:38.787, only 0.016 seconds away from the lap record which Aleix Espargaro had achieved in FP3, before taking an excursion through the run-off area at Turn 1. The Aprilia rider then snatched provisional pole back with that 1:38.742, while Quartararo consolidated third spot with a 1:38.959.

Aleix Espargaro was still pushing on his final lap when he outbraked himself at Turn 10, and Bagnaia was also continuing to chase time. This was it as the Ducati rider continued to find the pace to challenge, but it wasn’t quite enough as he crossed the line and was forced to settle for second. Quartararo, meanwhile, secured third but two tenths off the top.

The Grid
Behind three of the top four in the Championship as Aleix Espargaro heads Bagnaia and Quartararo, it’s a horde of Bologna bullets on Row 2. Johann Zarco (Prima Pramac Racing) finished Q2 with a 1:39.027 to claim fourth, and he was just 0.072 seconds up on Mugello’s sensational rookie polesitter: Fabio Di Giannantonio. ‘Diggia’ impressed once more, taking another top five on the grid.

Jorge Martin (Prima Pramac Racing) was sixth-quickest courtesy of the 1:39.142 he set on his first run, likewise Alex Rins (Team Suzuki Ecstar) in seventh on a 1:39.145.

While 0.403 seconds separated first from seventh in qualifying, Viñales was 0.252 seconds further back in eighth spot, with Luca Marini (Mooney VR46 Racing Team) also making it onto Row 3. The fourth row will be headed up by Pol Espargaro (Repsol Honda Team), from Jack Miller (Ducati Lenovo Team) and the second of Q1 graduate in Nakagami.

So where’s Enea Bastianini (Gresini Racing MotoGP™)? The sole top five title contender out in Q1 lines up in P14, just behind Bezzecchi.

Row 5 is completed by Brad Binder (Red Bull KTM Factory Racing), who took a detour through the Turn 10 gravel trap on his final lap.

Then it’s Miguel Oliveira (Red Bull KTM Factory Racing) in 16th, ahead of 2020 Champion Joan Mir (Team Suzuki Ecstar) and Franco Morbidelli (Monster Energy Yamaha MotoGP™). Alex Marquez (LCR Honda Castrol) missed the session after a nasty-looking crash in FP4 which saw the Spaniard taken to the medical centre for an x-ray on his left wrist, rider to be reviewed before Warm Up.

Mooney VR46 Racing Team’s Celestino Vietti has taken a precious Moto2™ pole position at the Gran Premi Monster Energy de Catalunya. The Italian has seen his World Championship lead whittled down to a countback in recent rounds, but his last-gasp 1:43.823 at the Circuit de Barcelona-Catalunya gives him a great platform to start rebuilding his margin in the points table. Missing out on pole by just 0.008 seconds was Aron Canet (Flexbox HP40), while Joe Roberts (Italtrans Racing Team) qualified third despite setting his fastest lap in ‘traffic’.

Q1
Vietti had dropped into Q1 after missing the top 14 by just 0.034 seconds following an ultra-tight FP3 earlier in the day, but safely got himself out of the opening stanza of qualifying with the second-fastest lap time of that session, a 1:44.490. It was Canet, however, who was the early pace-setter in Q2, with a 1:44.210 on his first flyer and a 1:43.831 on his second.

Q2
That was the fastest lap time of the weekend to that point, and it was still the quickest that anyone had gone when the chequered flag started to fly. Roberts had topped FP3 with a 1:44.154 but did even better than that on his final lap of qualifying, logging a 1:44.002 despite coming across considerable traffic as he started the fourth sector of the Catalunya circuit. That put the American onto the middle of the front row, before he was shifted back a spot when Vietti came through with the 1:43.823 which elevated the Italian from ninth on the timing screen to the very top.

The Grid
Vietti, Canet and Roberts head the grid, with plenty more fast faces on the chase. Jake Dixon set good early pace, holding second at one point on a 1:44.045, and he was also content to help fellow Inde GASGAS Aspar Team rider Albert Arenas too. Dixon spread his limbs as wide as he could to enhance the slipstream for Arenas, and the Spaniard clocked a 1:44.049 at the halfway mark of Q2. By the flag, those times putt the Briton and  Spaniard fourth and fifth respectively. They will be joined on Row 2 of the grid by Sam Lowes (Elf Marc VDS Racing Team).

Ai Ogura (Idemitsu Honda Team Asia), who is behind Vietti in the World Championship only because he has one win, rounded out the top 10 in qualifying, ahead of Q1 pace-setter Alonso Lopez (Lightech Speed Up) and Mugello winner Pedro Acosta (Red Bull KTM Ajo). The latter’s Q2 pace was something of a surprise considering he was only 0.002 seconds away from the top in FP3, yet only got onto Row 4 at the end of his next session with a 1:44.691.

For only the second time in his career, Leopard Racing’s Dennis Foggia will start a Grand Prix from pole position, taking over on top in the final seconds of Q2 at the Monster Energy Catalan Grand Prix. The Italian will be joined on the front row by Red Bull KTM Tech3’s Deniz Öncü and Valresa GASGAS Aspar Team’s Izan Guevara.

Q2
After setting the fastest lap of the weekend in FP3 earlier on Saturday, Foggia was the favourite and he quickly got to work. As the final runs began, the Leopard rider was three tenths clear of another happy to go it alone: Guevara.

Despite a smattering of red sectors elsewhere, the Italian never looked like being knocked off top spot in the final flurry of fast laps. And he improved again, getting down to a 1:48.290, to secure a second pole of his lightweight class career. Öncü got to within a tenth and a half to secure second, whilst Guevara left it very late to bag the final spot on the front row.

The Grid
Frenchman Lorezno Fellon (SIC58 Squadra Corse) was unlucky to miss out on the front row after Guevara’s late attack but had one of his best Saturdays yet. He’ll be joined on Row 2 of the grid by Q1 graduates Ryusei Yamanaka (MT Helmets – MSI) and Riccardo Rossi (SIC58 Squadra Corse).

#CatalanGP
Get All Our Latest News Sent Direct To Your Inbox
Join 30,253 other subscribers.
Follow on Social Media
Get the VROOM Podcast
Download our Vroom.GP App