Augusto Fernandez 3rd and Pedro Acosta 6th in the #CatalanGP 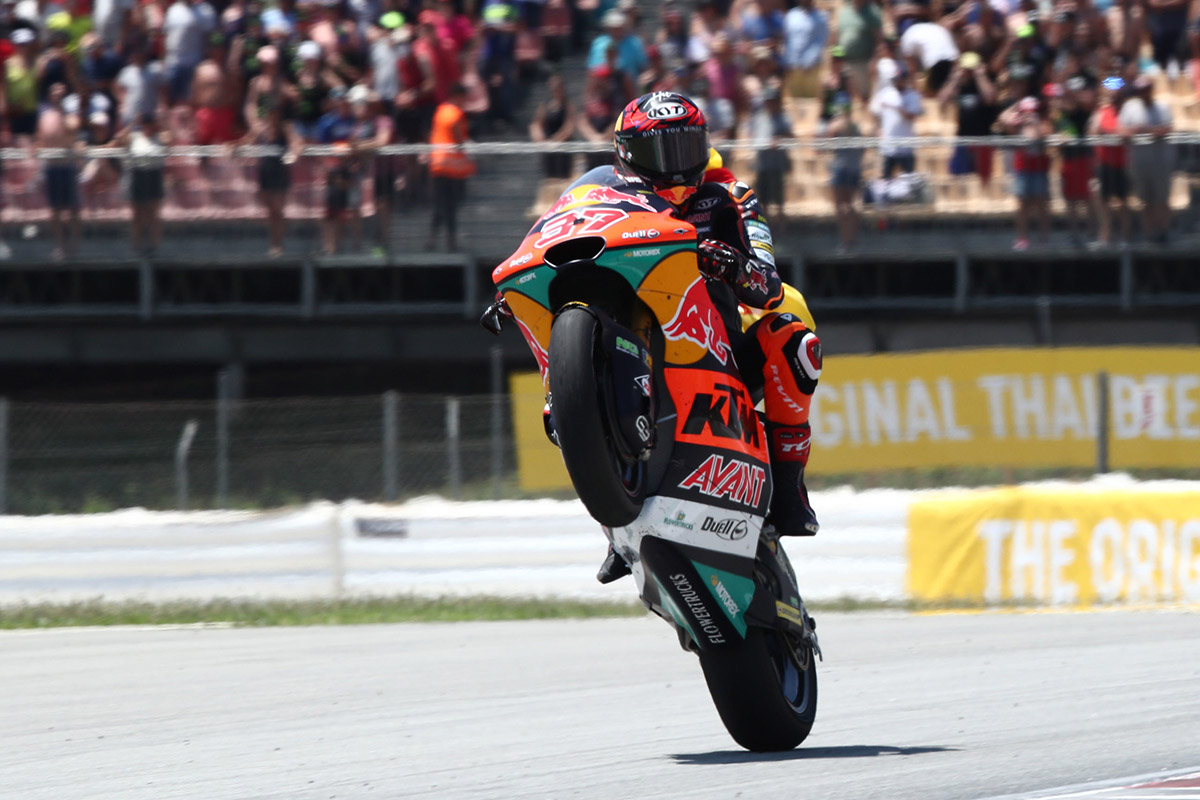 The Red Bull KTM Ajo Moto2 team earned positive results at the Catalan Grand Prix, as Augusto Fernandez moved his way up the order and claimed third place in Barcelona, whilst Pedro Acosta finished sixth after starting from twelfth on the grid.

Fernandez was on the third row of the grid when the lights went out, and a large group formed around him. That, coupled with high temperatures on track, made it difficult to gain positions quickly. Fernandez felt better lap after lap, and moved up to fourth place with eight laps remaining. He set his sights on catching up with the leading riders and fighting for the podium, and did so on the last lap, moving into third place before the chequered flag and claiming his second rostrum of the season.

Acosta took off from twelfth, and also progressively climbed positions throughout the race. He maintained a good pace from the start, allowing him to break into the Top 10 and chase down the leading pack. Gradually closing the distance, on the last five laps Acosta increased his pace, pushing hard and finishing in sixth.

Fernandez is fourth in the overall standings with 96 points, while Acosta is tenth with 55. The next round for the Moto2 class will be the German Grand Prix, held from June 16-19th.

#37 AUGUSTO FERNANDEZ
“It was a very tough race and I’m happy about the podium, because I’d started on the third row and the traffic on the first few laps was difficult for the tyres. In this race there was a group formed, my tyre temperature went up and it made riding and attacking very difficult. In the end, on the last lap I went for it and the strategy worked out well for me. I’m happy with the result and with our position in the World Championship. There’s still a long way to go, but we’re up there after a start to the season that was not as expected.”

#51 PEDRO ACOSTA
“We salvaged something from the weekend. This is the first race that I started from far back, fought back and didn’t crash. We are getting used to the class and, in the end, managing the race. They were things that I lacked, and today we suffered from that. I think we have to be happy because now we are up there. I spent quite a few laps behind another rider, my tyre overheated and from then on everything became more difficult. We finished the race and came home sixth, which I think, apart from the victory, is one of our best results. We are getting there. When the tyre temperature began to drop, we were getting there. I think it was all about race management and we will take away the experience.”