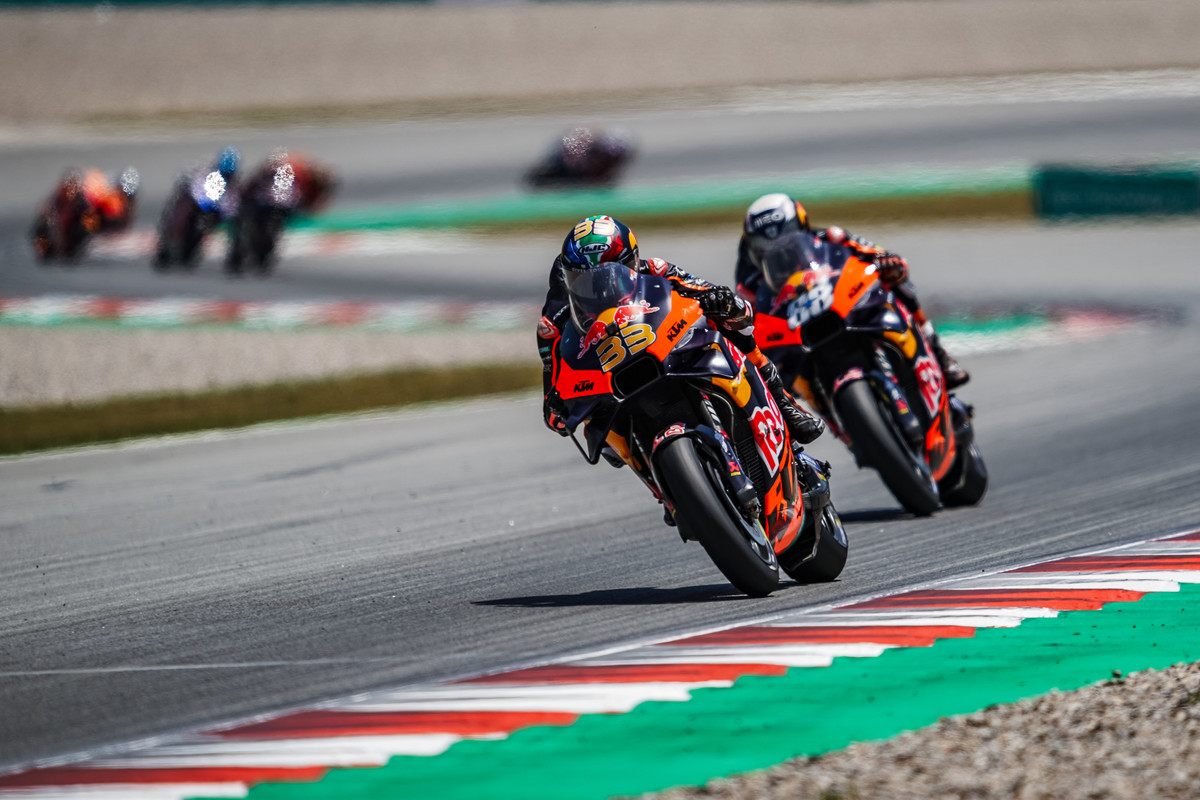 Brad Binder and Miguel Oliveira starred for Red Bull KTM Factory Racing as they scored 8th and 9th positions in another strong MotoGP outing for the squad, this time around the slippery Circuit de Barcelona – Catalunya. A hot and demanding Catalan Grand Prix saw all KTM RC16s in the points with both Tech3 KTM Factory Racing MotoGP class rookies posting their highest classifications to-date.

Sweaty and humid conditions marked the ninth Grand Prix of 2022 and the 31st time the compact Circuit de Barcelona – Catalunya has welcomed the FIM series. The state of the Spanish asphalt proved to be a headache for teams in their quest to maximize grip and also perverse tire life throughout the 24-lap race distance.

Binder was the most advanced KTM rider on the grid with a berth on the right side of the fifth row. The South African then circulated in close company with teammate Oliveira for most of the affair as the pair were among the very few racers that selected the hard front Michelin tire. Binder was able to create a small cushion for himself in 8th as Oliveira also circulated comfortably in 9th ahead of Alex Marquez.

Tech3 KTM Factory Racing again tried their hardest to guide their rookie pairing through one of the trickiest events this season and were rewarded with the best results of the campaign. Reigning Moto2 world champion Gardner was less than two seconds from a top ten classification while Fernandez grabbed his first MotoGP point by hurrying to a deserved 15th.

Binder is now 6th in the championship standing while Oliveira is next on the list in 11th.

MotoGP remains in Catalunya on Monday for a one-day IRTA test. Both KTM teams will be in action testing parts and ideas for the 2022 and 2023 configurations of the KTM RC16. The series then pauses for a week before the Liqui Moly Motorrad Grand Prix Deutschland at Sachsenring on June 19th.

Brad Binder:
“Today, if you look at the positions, I don’t think we can be too unhappy. To come from 15th to 8th means some solid points for our tally but it was a difficult race. I couldn’t push like I wanted as I had problems with front traction and was looking after the rear tire. I just tried my best until the end and that was all I could do. Tomorrow my main goal is to make sure that the team have a very clear idea of what we need and which direction we have to work and how they can bring us a competitive package for not only the rest of the season but also next year.”

Miguel Oliveira:
“As expected a hard race with low grip conditions but we had enough performance to be in the top ten so I’m happy for this. We made good decisions in the race. I’m only a bit frustrated by not being able to complete an overtaking move on Brad and I lost too much time. I then did the rest of the race alone. It was all that was possible today and now we have the test tomorrow and we hope to make our bike a little bit better for the coming races, this will be key.”

#CatalanGP
Get All Our Latest News Sent Direct To Your Inbox
Join 30,246 other subscribers.
Follow on Social Media
Get the VROOM Podcast