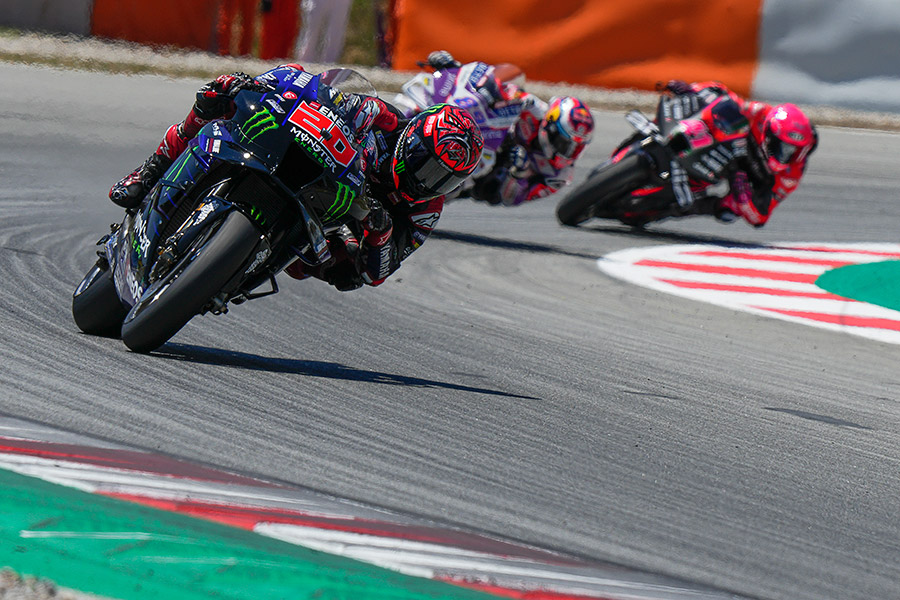 The Gran Premi Monster Energy de Catalunya truly was a monster weekend for Championship leader Fabio Quartararo (Monster Energy Yamaha MotoGP™). The Frenchman put to bed any flashbacks of late heartbreak in 2021 to pull clear and throw down the gauntlet at the front, taking his second MotoGP™ win at the venue and extending his lead in a dramatic day for a number of key rivals.

An incident into Turn 1 first saw Francesco Bagnaia (Ducati Lenovo Team) and Alex Rins (Team Suzuki Ecstar) suffer contact from Takaaki Nakagami (LCR Honda Idemitsu) after a crash for the Japanese rider, all ultimately unable to continue in the race, and then another contender was out as Enea Bastianini (Gresini Racing MotoGP™) crashed out alone mid-race. Finally, there was a heart-breaking blunder for Aleix Espargaro (Aprilia Racing). The number 41 was in second place when celebrated a lap too early – leaving him pushing to keep a place in the top five.

At lights out, Quartararo nabbed the holeshot and avoided the chaos to hit the front, quickly stretching out a lead. By the end of the opening lap, he was nearly a second clear of the rest, keeping that margin ahead of Aleix Espargaro. Martin then complicated life more for the Aprilia rider as he sliced past into second, and Johann Zarco (Prima Pramac Racing) was next on the chase. Just behind them, a fast-starting Joan Mir (Team Suzuki Ecstar) was already up to fifth and, once past, trying to shake off Luca Marini (Mooney VR46 Racing Team).

As Quartararo pounded on, the focus shifted to the fight for second. With 15 to go, Aleix Espargaro struck and the number 41 pitched it perfectly at Turn 1 to move through, with Zarco, in turn, making a gain on Martin too. Quartararo was three seconds clear of the Aprilia, the Pramac duo were locked together, Mir was still holding off Marini and Viñales was up in seventh.

By this time, Marco Bezzecchi (Mooney VR46 Racing Team) had slid out, and Fabio Di Giannantonio (Gresini Racing MotoGP™) too. In between the two there was the second seismic shift in the title fight as Bastianini crashed out from P7. That meant two of the top four going in were now down and out, as Quartararo continued on at the front.

As ‘El Diablo’ continued to count down the laps, the race for second was far from over. After stalking Martin, Aleix Espargaro hit back with four to go, again mugging the Prima Pramac Racing rider at Turn 1 and getting the job done. Everything looked under control, but there was drama, drama just around the apex.

Over the line to start the penultimate lap, the Aprilia rider sat up into Turn 1. Was it a problem? A mistake? It was a heartbreaker, as Espargaro celebrated what would have been a fifth podium in a row but a lap too early. He realised not long after and slotted back in, duelling past Marini again as he watched the Prima Pramac duo disappear into the distance.

Up ahead, Quartararo crossed the line with a stunning advantage for a statement win, taking 25 points to extend his lead. Martin took second and Zarco third, with Mir then coming through to steal fourth late on after a stunning Sunday showcase from the Suzuki rider.

Aleix Espargaro crossed the line fifth for some still valuable points despite the pain of losing the podium, with Marini putting in an impressive race once again for sixth. Maverick Viñales (Aprilia Racing) had a strong Sunday to take P7, ahead of another raceday comeback for Brad Binder (Red Bull KTM Factory Racing) as the South African finished just ahead of teammate Miguel Oliveira.

Alex Marquez (LCR Honda Castrol) put in one of the rides of the day to complete the top ten despite starting last after sitting out qualifying following a big crash in practice. Marquez was diagnosed with no injuries on Saturday after a full check up, including cervical and neurological checks and an x-ray on his left arm, and after being passed fit to race in another medical review before Warm Up, the number 73 put in a stunner to move up to complete the top ten.

Celestino Vietti (Mooney VR46 Racing Team) vs Aron Canet (Flexbox HP 40) is one of the battles of the season in the standings, and in the Gran Premi Monster Energy de Catalunya the two went head to head on track once again. In a stunning race to the line, it was just 0.081 between the two as Vietti pipped the home hero after a last lap lunge. The fight for third went to the wire too, with Augusto Fernandez (Red Bull KTM Ajo) taking the final step on the podium after a final sector move on Jake Dixon (Inde GASGAS Aspar Team).

First it was Canet vs Dixon, then Vietti got past the Brit and the top two in the Championship were just about able to carve out some breathing space. This was it, Vietti vs Canet, all the way to the flag.

Onto the final lap it was the Italian ahead over the line, but Canet attacked at Turn 1 and took over in front. Still, the VR46 rider stalked his prey and chose a late move at Turn 10, slicing through to take over and then shutting every door. Out of the final corner Canet tried to find space around the outside but couldn’t quite make the attack, with the two then tucked in to the line and Vietti just taking it by 0.081. Another win and some more points for the Italian at the top of the table, but still another impressive bounce back and podium for Canet.

Fernandez also had his work cut out, the Spaniard moving through from a bit further back to get into that fight at the front, make his way to the fight for the podium and then swoop past Dixon late on.

Alonso Lopez’s (Lightech Speed Up) impressive arrival to the World Championship continued in eighth, with the Spaniard less than a second behind Ogura. Manuel Gonzalez (VR46 Master Camp Team) took a top ten in P9, with Tony Arbolino (Elf Marc VDS Racing Team) tenth and after an early Long Lap penalty for a shortcut.

Izan Guevara (Valresa GASGAS Aspar Team) was back on the top step in the Gran Premi Monster Energy de Catalunya, and in some serious style. Pulling away late on for a leisurely last lap – from the outside at least – the number 28 took victory by 1.9 seconds. The battle for second was a stunner too, with Daviz Muñoz (BOE Motorsports) coming out on top in only his second ever Grand Prix, beating Tatsuki Suzuki (Leopard Racing) and Championship leader Sergio Garcia (Valresa GASGAS Aspar Team) to the line. Title contender Dennis Foggia (Leopard Racing) suffered a DNF after a technical problem.

Before that, Foggia grabbed the holeshot, with Garcia also making some headlines as he made up some good ground from the latter half of the top ten to slot in on the chase.  Soon enough it settled into a now-familiar sight at the front: the GASGAS duo vs Leopard. And that way it stayed for a handful of laps, before that serious drama for Foggia. Heading into Turn 10, the Leopard rider headed wide but then slowed in the run off – suffering a technical problem and out the race.

There was more attrition heading for the front freight train. This time it was a multi-rider domino effect, with Ryusei Yamanaka (MT Helmets – MSI), David Salvador (Sterilgarda Husqvarna Max) and Daniel Holgado (Red Bull KTM Ajo) all caught out and only Yamanaka able to rejoin. After implicated riders left the track before a hearing could take place regarding the incident, the FIM MotoGP™ Stewards will hold a hearing on Thursday of the German GP.

That drama had cut the front group down but more fast faces were soon on the scene as it returned to a fight throughout the points. Guevara had a small gap by five to go though, with Garcia on the chase and the stunning second ever World Championship race performance from Muñoz going strong as he duelled Suzuki.

Onto the final lap, there was no catching Guevara. The GASGAS rider had it signed, sealed and delivered with a healthy gap, and the battle for second only got closer. Garcia vs Suzuki vs Muñoz went right to the wire, with the number 44 giving the veterans as good as he got. And, he came out on top. Nearly neck and neck to the line, it was Muñoz who took it by 0.010 as Suzuki takes third and Garcia, despite holding second for a number of laps, forced to settle for fourth.

Deniz Öncü (Red Bull KTM Tech 3) won the battle for fifth as the Turk took another top result but remains on the search for that podium, with Carlos Tatay (CFMoto PrüstelGP) next up. John McPhee (Sterilgarda Husqvarna Max) finished seventh ahead of Jaume Masia (Red Bull KTM Ajo), with a bigger gap behind the two veterans to Adrian Fernandez (Red Bull KTM Tech3) and Xavier Artigas (CFMotoPrüstelGP).