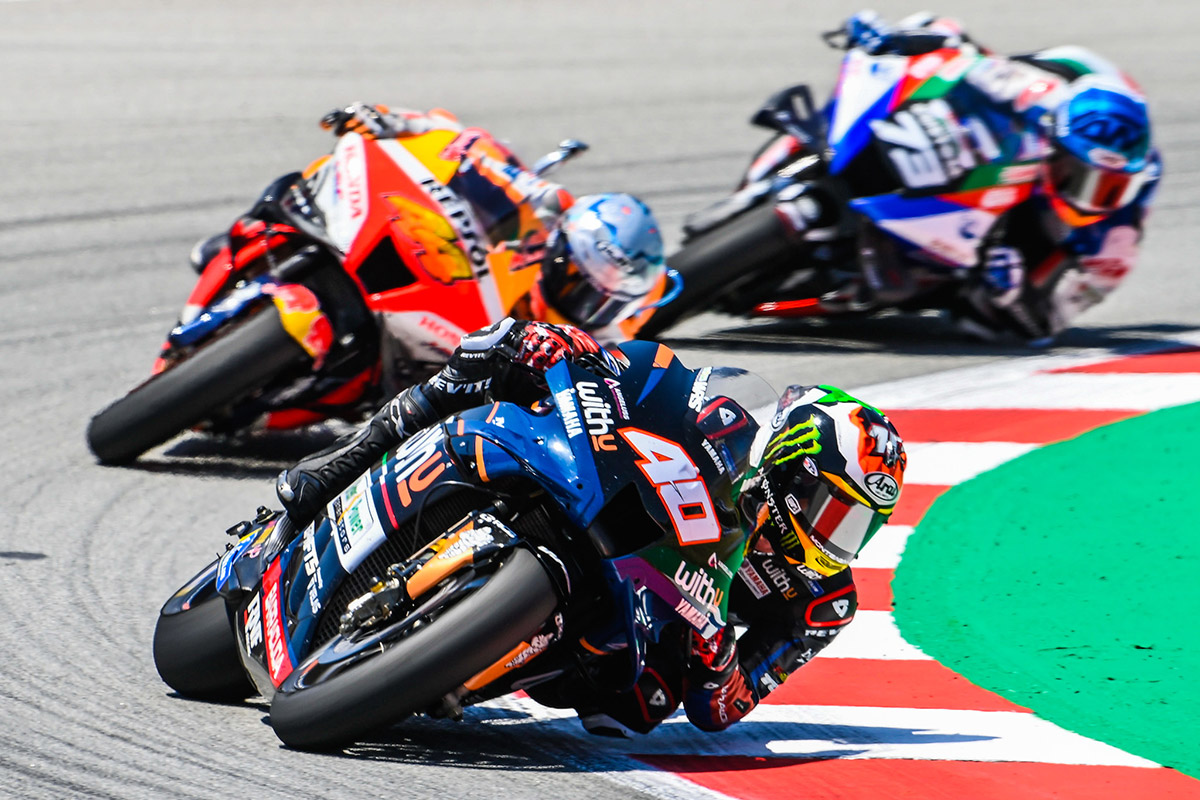 In front of 60.000 passionate fans, the WithU Yamaha RNF MotoGP Team was back in the points today at a scorching Circuit de Barcelona-Catalunya with Darryn Binder, who delivered an impressive 24 laps heat battle.

The South African came off strong start from P23 on the grid to make up seven positions in just the first sector and another two until the end of the first lap, which catapulted him to P14 early in the race. He made his way up to tenth but strong competition eventually placed him in P12 halfway through the race. From then on, he was fighting hard in a strong group with Jack Miller, fellow rookie Remy Gardner and Yamaha colleague Franco Morbidelli. He finished as second best Yamaha rider and second best rookie in 12th, just 0.438 seconds behind Gardner.

On the other side of the WithU Yamaha RNF MotoGP Team garage, Andrea Dovizioso managed to defend his 19th position from the start in the first laps. In lap five, he moved up one place and only three laps later the Italian was already in 15th, fighting for points again. Yet he unfortunately suffered a lot with his front tyre, which forced him to return to the pits with seven laps to go and to retire.

Following the back to back rounds in Mugello and Barcelona, it’s still not time to return home for the WithU Yamaha RNF MotoGP Team and the rest of the MotoGP grid, as the riders will have a chance to further work on their bikes and performances during an official day of test tomorrow at the Circuit de Barcelona-Catalunya.

“It was a good race for me today. I knew that my Qualifying position yesterday didn’t really indicate what I was capable of. Anyway, I got off to quite a good start. I was a bit unsure during the race about how much to push in the beginning because I knew the tyre was going to wore off, but I wasn’t really sure about how much. I still had a really good race, I battled with some really big names that have achieved a lot, so I really enjoyed it a lot. Remy got the better of me on the last lap and I just didn’t have anything left to get back at him, but it was cool. Step by step I feel like I’m heading in the right direction. I’m looking forward to tomorrow’s test to try to improve on the soft tyre for Qualifying to get a better starting position, which should make my life easier on a Sunday.”

“I’m a bit disappointed, because this weekend overall was quite a bit better. We arrived at the race with an improved feeling, but unfortunately, Bradl crashed in front of me in turn 10 of the first lap and I lost four positions. I couldn’t overtake other riders, I’m not able to accelerate well and on the brake in the front it was really difficult. It was locking and I couldn’t brake, so I couldn’t overtake. I was able to manage the rear tyre in the right way and I knew I could be competitive at the end of the race and catch the group with Alex Marquez in front of me. But when I was behind some other guys with the slipstream, I couldn’t stop the bike, the front logged, I did a long run and it just wasn’t good. I’m disappointed about that, because my speed was a bit better than the others, but it is what it is.”