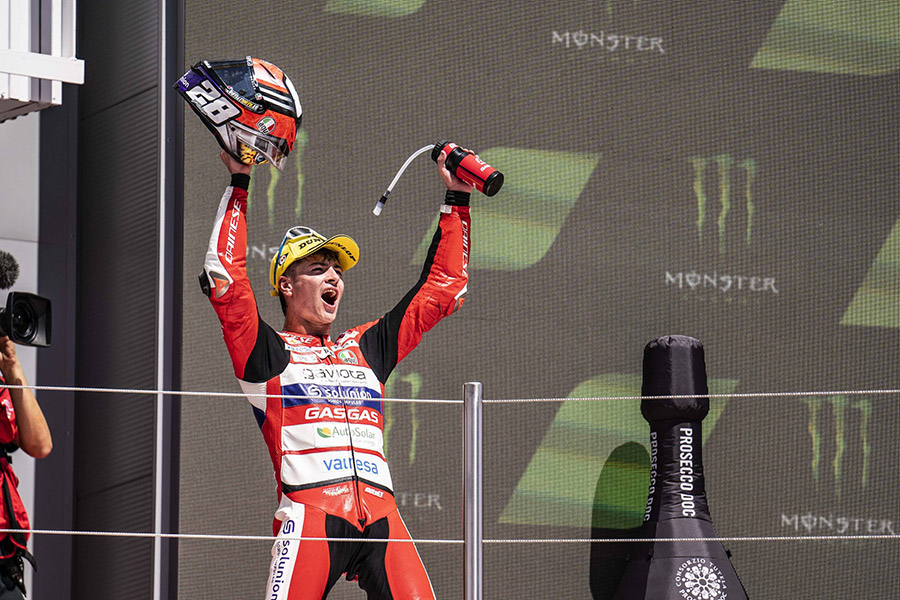 The Valresa GASGAS Aspar Team has celebrated its 500th Grand Prix with a victory, the fifth of the season. The team arrived in Barcelona with 103 victories and 325 podiums in its first 499 grand prix, and as of today adds one more victory thanks to Izan Guevara and his pace at the Catalan GP. The Valresa GASGAS Aspar rider had been one of the fastest in practice and started third, knowing that he could fight for victory. Guevara expected a small group, but he has not been able to avoid that, at times, the group included more than a dozen riders.

However, on lap 15 of the 21 laps of the race, he was able to take the lead and make the necessary gap to get away from his rivals and achieve his second victory of the year, the second on Spanish soil. Behind, there were only three rivals left fighting for the podium: Sergio García Dols, Tatsuki Suzuki and David Muñoz. The three have reached the finish line separated by a tenth of a second, but only two of them could get on the podium, and Muñoz, second, and Suzuki, third, have done so. The Valresa GASGAS Aspar rider had to settle for fourth place as he ran out of room to overtake his rivals, but he increased his advantage in the general standings with Jaume Masiá, who was eighth today, and Dennis Foggia, who could not score. García Dols leads the World Championship with 150 points, 16 more than Guevara, 47 more than Masiá and 55 more than Foggia.

WINNER Izan Guevara:
“I’m very happy with this victory, it’s my fourth consecutive podium finish and, had it not been for the Mugello penalty, it could have been the second victory in a row. There was a moment in the race when I was able to overtake several riders and put myself first and I started to open up a margin that allowed me to take the win. With Sergio’s fourth position, we get closer to him in terms of points, although right now the least important thing is the championship. We must continue working like this, there are still eleven races to go.”

4th Sergio García Dols (+2.036):
“We close a positive weekend, although we haven’t been able to balance the set-up of the bike at all. We knew that the bike was going well, but not as well as I would have liked. I did a mistake on the last lap because I thought there was one more lap to go and I didn’t overtake. Anyway, I’m happy and we continue working to prepare for Germany.”