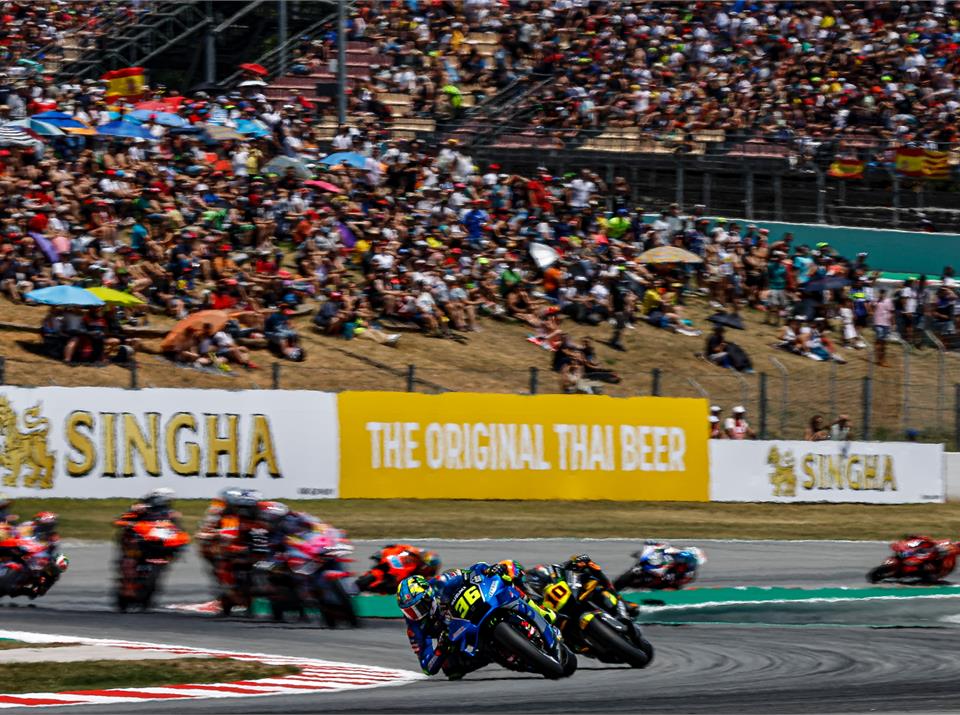 The Catalan GP was the definition of mixed fortunes for Team Suzuki Ecstar; Alex Rins had his race cut short at the first corner, and Joan Mir worked his way through the pack to bag another fourth-place finish.

As the 24 lap race got underway with track temperatures of over 55 degrees Celsius all was set for a thrilling Grand Prix, but from his seventh place grid spot Rins was denied the opportunity of performing well in front of his home crowd when he was taken down for the second week in a row. Nakagami went down at Turn 1, taking Bagnaia and Rins with him, and the three riders suffered a heavy crash. Rins had pain in his left wrist immediately after the fall, and at the time of publication he is undergoing medical checks in hospital.
A statement on Alex Rins’ condition will be issued later, following his medical examination.

Meanwhile, Mir put together a fantastic charge from 17th on the grid, making up 11 places in quick succession and running sixth by Lap 2. Although he had to drop one place for a yellow flag infringement, he didn’t let that deter him and he was back up to fifth in no time. He held a steady pace for the remainder of the race, staying focused and consistent, but with clear air either side of him. At the start of the last lap Mir moved up into fourth – equalling his best result this season achieved in Argentina and Texas.

“My first lap and the first part of the race went very well, I felt really good. I had a yellow flag penalty; I passed another rider on the straight when I was tucked down and then I didn’t see the flag at Turn 1. As the race went on I started to struggle a little bit, but I was able to manage the situation. It was very important for me to finish this race well and get prepared for the test tomorrow. It’s nice to take some points after a rough few weeks.”

“First of all, I hope that Taka is OK, because I saw him in the medical centre, and I saw the replay of the crash, and it was very bad. You never want to see anyone injured, especially not a fellow rider. However, a mistake by him has cost me today, and another race with zero points is hard to take. I had a lot of potential today and strong pace, and I felt it could’ve been a really good race for me. But there’s nothing I can do now, and let’s see what the diagnosis is at the hospital.”