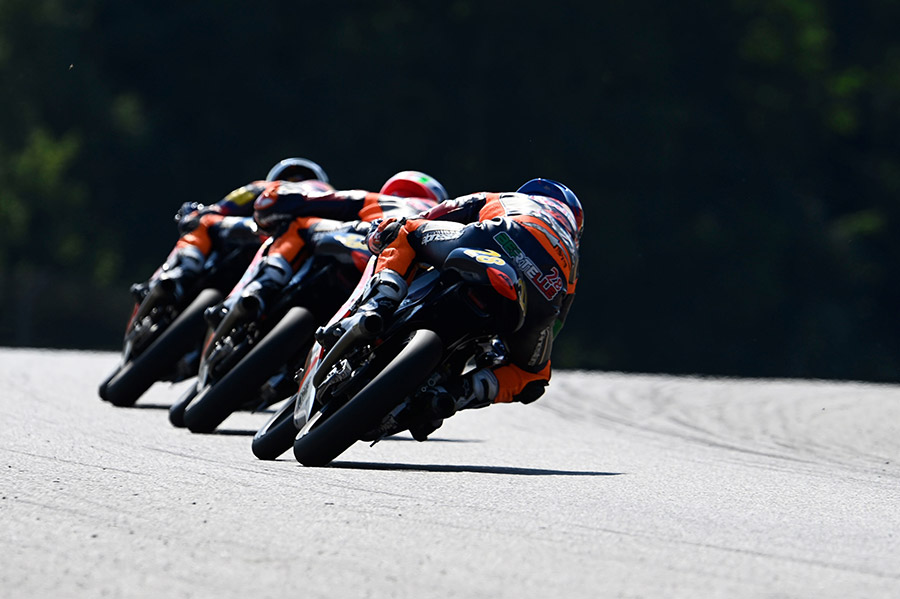 The Sachsenring guarantees drama and this year it may well be pivotal to the title chase as it has in the past. This is the 4th round round of the Red Bull MotoGP Rookies Cup races 7 and 8 of the season. Mugello was sensational, it threw everything open, showing what some unpredictable weather and emerging stars can do.

The rain caused a run of hero-to-zero errors and produced a winner who hails from rain free Murcia. Max Quiles showed himself a genuine championship contender, matching his sunshine win in Jerez Race 2 with a very different Italian victory.
Quiles took his own dive to a DNF on Sunday and Collin Veijer bettered the pack on the run in to the line showing that emerging stars are not all first year Rookies. Veijer has grown up so much in this his third season and arrives in Germany second in the points chase, confident in his own ability and with the advantage of having raced at the Sachsenring in last year’s Rookies Cup.
Key opponents like Quiles and points leader José Rueda are first year Rookies and have to play catch up. The Sachsenring is a special test, it has the most dramatic changes of elevation on the calendar, more aggressive even than Portimão.

Every turn in Germany is something special, from the looping long right hander that starts the lap and seems to go on forever then empties into a downhill left that thrusts the KTM RC 250 Rs into a treacherous right at the bottom of the hill.

What follows is the longest series of left handers in GP racing, rising, then falling, faster and faster then rising again, melting that left hand side of the Dunlops until the incredible right flick over the top of the hill behind the pits and into the waterfall.
Races are won and lost on the braking into the left at the bottom of the following straight and re-decided on the short run to the final left with its crucial steep exit to the flag.
You can see why a bit of experience will come in handy and Veijer will be keen to make the best of it. His opposition are fast learners though and it will be close.