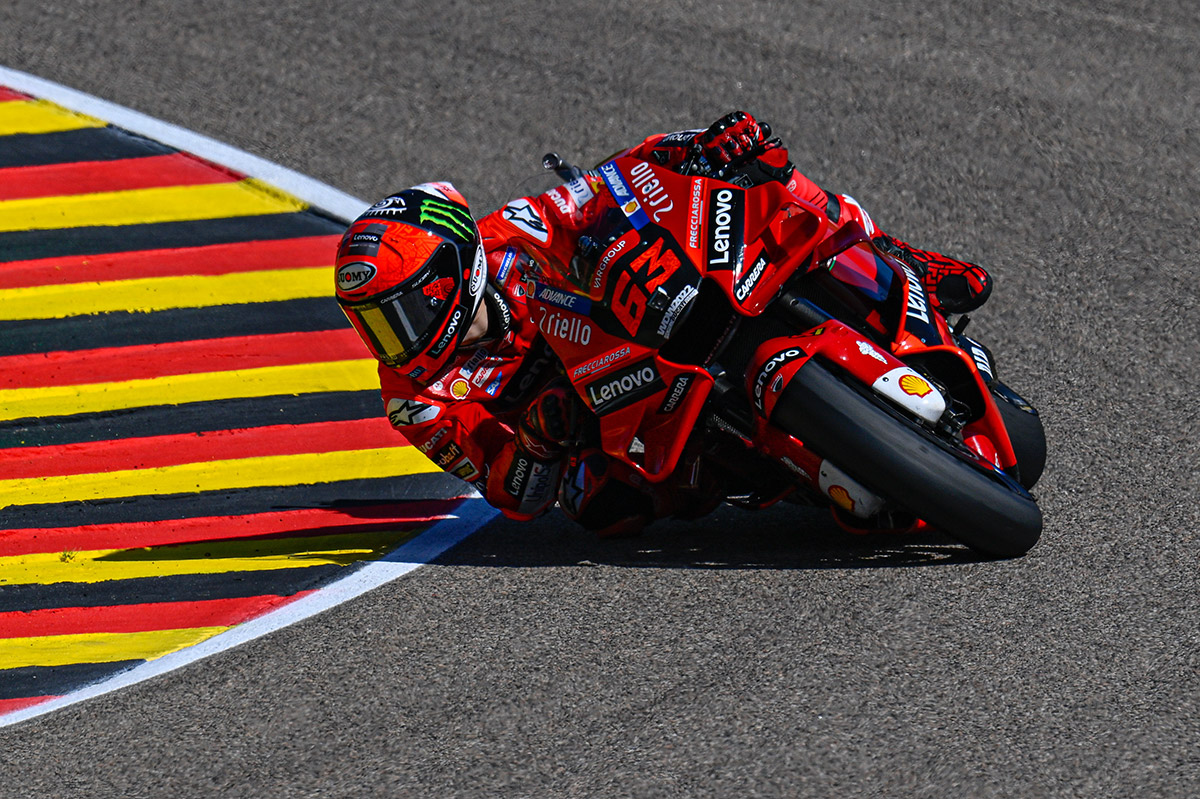 Ducati Lenovo Team’s Francesco Bagnaia has come tantalisingly close to the 1:19s as he broke the All Time Lap Record in MotoGP™ FP2 at the Liqui Moly Motorrad Grand Prix Deutschland. The Italian fired in a 1:20.018 to establish a new benchmark around the Sachsenring as Ducati locked out the top three in the afternoon and overall. Mooney VR46 Racing Team’s Luca Marini grabbed second and FP1 pace-setter Jack Miller (Ducati Lenovo Team) took third, with Aprilia Racing’s Aleix Espargaro the best of the rest.

FP1
The twisty layout of the Sachsenring might not traditionally have suited the Bologna bullets, but it seems times they are a-changing as Ducati Lenovo Team had already gone one-two in FP1. Miller led the way with a 1:21.479, ahead of Bagnaia by just over a tenth.

World Championship leader Fabio Quartararo, who had the new-spec swingarm on his YZR-M1, was not far away either. The Monster Energy Yamaha MotoGP™ rider finished the session third-fastest courtesy of a 1:21.557 which he set just after Miller’s fastest lap. Very few went for time attacks at the end of proceedings but Quartararo continued to lap in the 1:22s despite using just the one set of tyres. Fourth went to Johann Zarco (Prima Pramac Racing) on a 1:21.655 and fifth to Takaaki Nakagami (LCR Honda Idemitsu) on a 1:21.660, an encouraging start to the weekend for the Japanese rider after his crash at Catalunya a fortnight ago.

Aleix Espargaro (Aprilia Racing) was a solid sixth in FP1, and sampling the Noale factory’s new fairing, he clocked a 1:21.665 and managed to keep himself upright despite an excursion through the gravel at Turn 1. Marini started seventh on a 1:21.671 while Andrea Dovizioso (WithU Yamaha RNF MotoGP™ Team) picked himself up from a crash at Turn 1 to claim eighth with a 1:21.730 which he set near the end of the session on new tyres.

FP2
Aleix Espargaro took over on top with a 1:20.789 on his first run, with Bagnaia just 0.054 seconds slower. But Miller was one of the earliest to switch to genuine time attack mode in the closing stages of FP2 and, armed with new softs on the front and rear, he vaulted back to the top with a 1:20.211. Aleix Espargaro twice came close to bettering the Australian again with a 1:20.284 and a 1:20.219 on consecutive laps, but it fell to the man on the other red Ducati to get the job done.

Bagnaia broke Marc Marquez’s three-year-old All Time Lap Record of 1:20.195 when he laid down a 1:20.132 on a medium-soft tyre combination in the final three minutes of the session, and there was time enough to go even faster again before the chequered flag unfurled. Marini likewise beat Marquez’s old Sachsenring benchmark, shuffling Miller back to third, albeit only at 0.193 seconds off the pace of his team-mate… and that makes it a Ducati top three heading into Saturday.

Provisional Q2 places
Behind the Ducati trio, Aleix Espargaro was fourth-fastest all-told, and he is the odd one out in a top six otherwise filled up by GP22s. Johann Zarco claimed fifth on a 1:20.264 and Prima Pramac Racing teammate Jorge Martin finished up sixth on a 1:20.275.

Seventh overall goes to World Championship leader Quartararo on a 1:20.399, ahead of Maverick Viñales (Aprilia Racing) and another impressive performance from Fabio Di Giannantonio (Gresini Racing MotoGP™) on yet another Ducati.

Either side of the top 10 cut-off which decides who goes straight into Q2, as it stands it’s Joan Mir in 10th on a 1:20.574 and his Team Suzuki Ecstar teammate Alex Rins in 11th on a 1:20.591. Nakagami faded in the afternoon but was first of the Honda riders in 12th on a 1:20.616, while Enea Bastianini (Gresini Racing MotoGP™) took 13th at another 0.131 seconds off the pace after an early run through the gravel at Turn 1. Pol Espargaro took 14th, ahead of Franco Morbidelli (Monster Energy Yamaha MotoGP™), Marco Bezzecchi (Mooney VR46 Racing Team), and the first of the KTM contingent in Miguel Oliveira (Red Bull KTM Factory Racing), in 17th after a tough day for the Austrian factory.

Those outside the top ten will, of course, all be looking to improve their positions and book a place in Q2 when FP3 unfolds on Saturday.

Red Bull KTM Ajo’s Augusto Fernandez is the rider to beat after topping both Moto2™ Free Practice sessions on the opening day of the Liqui Moly Motorrad Grand Prix Deutschland, and both by big margins. He raised the bar and ended FP2 nearly half a second clear, with teammate Pedro Acosta next-best and Fermin Aldeguer (MB Conveyors Speed Up) making it an all-Spanish top three. Meanwhile, World Championship leader Italian Celestino Vietti (Mooney VR46 Racing Team), is currently a considerable way outside the provisional Q2 cut-off…

Fernandez was comfortably quickest in FP1 and 0.421 up on the field, and that was still the best lap of the day through much of FP2. It was only beaten by the man himself with less than 10 minutes to go in the afternoon when he went almost two tenths faster again. The Red Bull KTM Ajo duo was flying in formation but when Acosta crossed the line just behind, he was still 0.470 seconds shy and that’s how it stayed.

Earlier, Aldeguer had got somewhat close to the fastest lap of the session when he set a 1:24.501, and that effort would be good enough for third-quickest overall. Sam Lowes (Elf Marc VDS Racing team) clocked a late 1:24.557 to take up fourth spot and shuffle fellow Briton Jake Dixon (GASGAS Aspar Team), who laid down an early 1:24.600, back to fifth. Marcos Ramirez (MV Augusta Forward Racing) was another who did his best work right near the start of FP2, a 1:24.621 earning him sixth on the timesheets, ahead of home hero Marcel Schrötter (Liqui Moly Intact GP), rookie Alonso Lopez (MB Conveyors Speed Up), the now nearly-recovered Lorenzo Dalla Porta (Italtrans Racing Team), and Portugal winner Joe Roberts (Italtrans Racing Team).

Fine weather is expected again when FP3 unfolds and a number of key players in the World Championship will be hoping to improve. Currently 11th-fastest is the man who was runner-up at the Catalan GP a fortnight ago, Aron Canet (Flexbox HP40), ahead of Albert Arenas (GASGAS Aspar Team), Filip Salač (Gresini Racing Moto2™), and Jorge Navarro (Flexbox HP40).

That leaves Tony Arbolino (Elf Marc VDS Racing Team), Somkiat Chantra (Idemitsu Honda team Asia), and Ai Ogura (Idemitsu Honda Team Asia) all looking for more, and Arbolino did not register a lap time in FP1 due to an early crash. The Italian only got up to 16th with a 1:25.058 in FP2, while Chantra and Ogura sit 19th and 21st respectively. Still, all three are faster than the rider at the very top of the Championship points table, with Vietti 24th and a full 1.467 seconds off on Friday.

Leopard Racing’s Tatsuki Suzuki ruled Day 1 at the Liqui Moly Motorrad Grand Prix Deutschland. The Japanese rider set a 1:26.363 in FP2 to take over on top overall, while teammate Dennis Foggia took third thanks to his time from the afternoon, too. GASGAS Aspar Team’s Izan Guevara splits the duo on the combined timesheets thanks to his FP1-topping 1:26.459.

The combined top 14 and riders provisionally on to move through to Q2 was exactly the same as the top 14 in FP1 until the last five minutes of the afternoon session, when Stefano Nepa (Angeluss MTA Team) elevated himself to fourth with a 1:26.842, knocking Jaume Masia (Red Bull KTM Ajo) back to 15th, but it was hardly the end of the story.

Joel Kelso (CIP Green Power), the rookie on his second visit to the Sachsenring in Moto3™, took fourth on the combined times on a 1:26.608 and John McPhee (Sterilgarda Husqvarna Max) finished fifth courtesy of his 1:26.691 from FP1. Lorenzo Fellon (SIC58 Squadra Corse) made an almighty save into Turn 11 when he closed up on Alberto Surra (Rivacold Snipers Team) before setting a 1:26.768 later in the session, that good enough for sixth ahead of Nepa.

In FP1 only Masia crashed, before Kaito Toba (CIP Green Power) and Carlos Tatay (CFMoto Racing PrüstelGP) took tumbles in the afternoon but riders all ok.