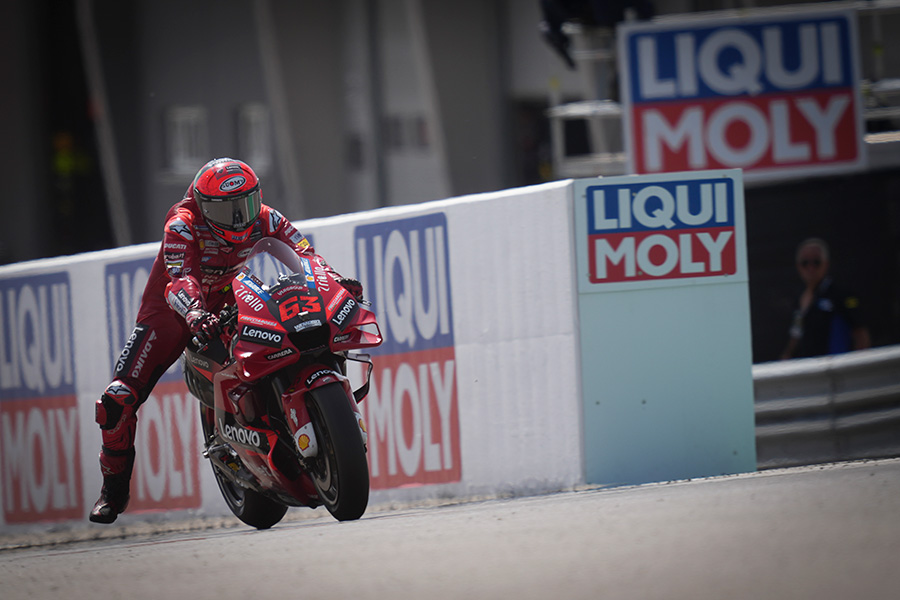 Ducati Lenovo Team’s Francesco Bagnaia carried his superb Free Practice form into qualifying for the Liqui Moly Motorrad Grand Prix Deutschland as he secured pole position with a new pole lap record. The Italian was the only rider who could get into the 1:19s in Q2 at the Sachsenring – a 1:19.931, specifically – although the front row was still covered by less than a tenth, and the very same Bagnaia remains the outright lap record holder from earlier in the day in FP3. Monster Energy Yamaha MotoGP™’s Fabio Quartararo gave himself a good chance of extending his World Championship with second on the grid, however, and he has 2021 polesitter Johann Zarco alongside him as Prima Pramac Racing rider took third.

There are three different factories in the top four too, with Aprilia Racing’s Aleix Espargaro heading Row 2, but seven of the Bologna bullets made it into the second part of qualifying and six of those lock out the top eight. Fabio Di Giannantonio (Gresini Racing MotoGP™) topped Q1 before claiming fifth in Q2, ahead of Jack Miller (Ducati Lenovo Team), Luca Marini (Mooney VR46 Racing Team), and Jorge Martin (Prima Pramac Racing).

Pecco was quickly back into the pits for another new soft Michelin rear slick and was the first to go for his second run. He tightened his grip on provisional pole with a 1:20.064 and put more space between himself and the field when he backed that up with the aforementioned 1:19.931. No one would beat that time but, with the temperature pushing into the thirties at the Sachsenring, second position was, appropriately, also hotly contested. Aleix Espargaro clocked a 1:20.120 and then Quartararo a 1:20.093, before Zarco pipped both with a 1:20.030.

However, Quartararo does not lead the World Championship without digging deep, and ‘El Diablo’ had just that little bit more pace left as he put in a 1:20.007 just before the chequered flag. Bagnaia then tried to go for a third run, and while he ran out of time to start a lap again, it mattered not – pole was secured.

Di Giannantonio may have fallen into Q1 but he cleared that hurdle and the Italian rookie was as high as third-quickest before settling in fifth on the grid on a 1:20.128. As it stands, he will start between Aleix Espargaro and Miller, the latter of whom was sixth on a 1:20.150. Miller, however, also has a Long Lap penalty to take on Sunday after crashing under a yellow flag following a crash for Aleix Espargaro in FP4.

Pol Espargaro was an agonising 0.004 seconds away from moving through thanks to his late flying lap in Q1, and the Repsol Honda rider will therefore start at the head of Row 5 of the grid. He will be joined there by Red Bull KTM Factory Racing teammates Miguel Oliveira and Brad Binder, with Row 6 comprised of Alex Marquez (LCR Honda Castrol), Enea Bastianini (Gresini Racing MotoGP™), and home hero replacement rider Stefan Bradl (Repsol Honda).

Alex Rins (Team Suzuki Ecstar) withdrew from the event due to pain from his wrist fractured in Barcelona.

Elf Marc VDS Racing Team’s Sam Lowes claimed Moto2™ pole position at the Liqui Moly Motorrad Grand Prix Deutschland by a solid, 0.272-second margin. In scorching conditions at the Sachsenring, the Briton went as quick as a 1:23.493 to give himself the best possible chance of ending a run of six rounds in a row without points. The GASGAS Aspar Team’s Albert Arenas got a first intermediate class front row in second, and Red Bull KTM Ajo’s Augusto Fernandez grabbed third on the grid. World Championship leader Celestino Vietti (Mooney VR46 Racing Team) made Row 3, despite a trip through Q1.

Arenas was quickest out of the blocks in Q2 when he set a 1:23.765 and that was still best until, just after the 10-minute mark, Lowes jumped from eighth position to first with a time that was less than a tenth away from Raul Fernandez’s year-old All Time Lap Record. Augusto Fernandez, who had been rapid in Friday practice and top three in FP3, then claimed third spot with a 1:23.825.

It was Britons first and fourth, and GASGAS Aspar second and fourth, thanks to Jake Dixon. He was quickest of those who came from Q1 with a 1:23.897 on his first flying lap in Q2, while German Marcel Schrötter (Liqui Moly Intact GP) qualified fifth-fastest for his home event on a 1:23.913. Aron Canet (Flexbox HP40) is looking to go one better than he did a fortnight ago to finally get that maiden Moto2™ race win, and sixth is a solid place to launch from after the Spaniard set a 1:23.973. Next on the timesheet was Q1 graduate Tony Arbolino (Elf Marc VDS Racing Team) on a 1:24.091, ahead of fellow Q1-tripper Vietti.

Behind the points leader, Americans Joe Roberts (Italtrans Racing Team) and Cameron Beaubier (American Racing) complete the top 10, ahead of Pedro Acosta (Red Bull KTM Ajo), Alonso Lopez (MB Conveyors Speed Up), and his teammate Fermin Aldeguer (MB Conveyors Speed Up). Ai Ogura (Idemitsu Honda Team Asia) was 0.825 seconds off the pace in 14th, while teammate Somkiat Chantra is set to start from 21st after failing to get out of Q1.

GASGAS Aspar Team’s Izan Guevara continued his roll with Moto3™ pole position at the Liqui Moly Motorrad Grand Prix Deutschland. Fresh from breaking the All Time Lap Record in FP3 at the Sachsenring, he did it again in Q2 when he set a 1:25.869, 0.295 seconds quicker than the rest. Leopard Racing’s Dennis Foggia was next up, with Red Bull KTM Ajo’s Daniel Holgado will joining the duo on the front row.

The two fastest Moto3™ laps in history around the Sachsenring belonged to Guevara after FP3 earlier in the day, and now it’s three as a result of the Spaniard’s efforts in qualifying. He had an early 1:26.580 in Q2 cancelled due to a yellow flag, but then the Aspar rider fired in a 1:25.869 just before the chequered flag. A tour through the Turn 1 gravel trap followed but Guevara is nevertheless in red-hot form after winning the Catalan Grand Prix a fortnight ago, and will have his eyes on teammate Sergio Garcia’s World Championship lead on Sunday afternoon in Germany as the number 11 starts on Row 3.

Foggia set a 1:26.252 just ahead of teammate Tatsuki Suzuki just before the chequered flag and a 1:26.164 final effort after it to make sure of second on the grid, with Holgado, who had been fastest until Guevara’s pole lap, forced to settle for third.

Holgado spoilt what was provisionally an all-Japanese front row with five minutes to go in the session, but the trio in question has instead locked out the second row. Ayumu Sasaki (Sterilgarda Husqvarna Max), in his first weekend back his Free Practice crash at Mugello, claimed fourth on a 1:26.299, ahead of Suzuki on a 1:26.325 and Ryusei Yamanaka (MT Helmets – MSI) on a 1:26.467. The latter will, however, have to take a Long Lap penalty during Sunday’s race after having been found to have caused a crash last time out at Catalunya.

Jaume Masia (Red Bull KTM Ajo) failed to set a time when he crashed early in Q2, and the drama was even earlier for Deniz Öncü (Red Bull KTM Tech3) as he went from a provisional place in Q2 to 24th on the grid when his fastest lap in Q1 was cancelled due to a breach of track limits – and he was in the garage at the time.

#GermanGP
Get All Our Latest News Sent Direct To Your Inbox
Join 30,253 other subscribers.
Follow on Social Media
Get the VROOM Podcast
Download our Vroom.GP App