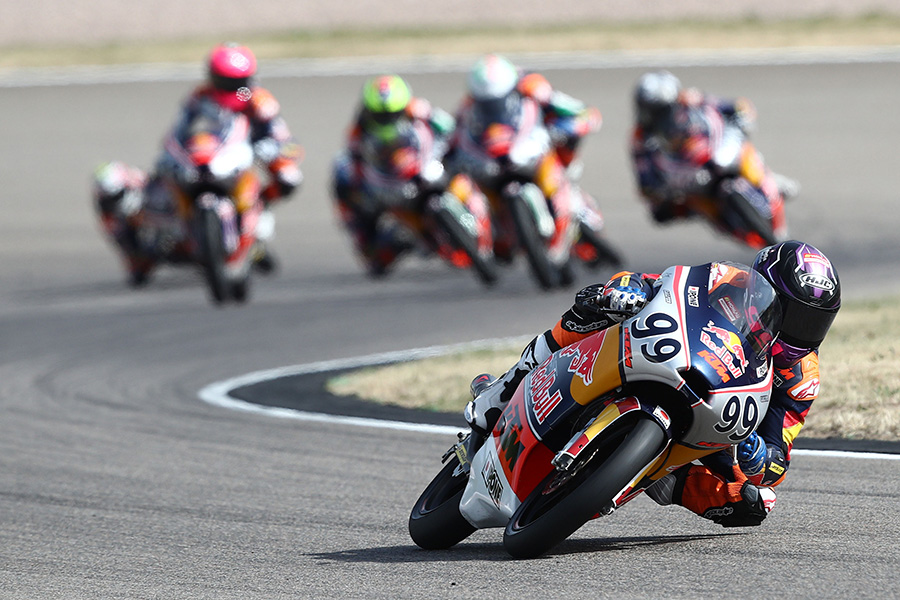 A perfect masterclass from José Rueda left the chasing pack of KTM RC 250 R’s well behind as the Spanish 16-year-old dominated Red Bull MotoGP Rookies Cup Race 1 at the Sachsenring.

The thrills were happening 10 seconds behind with an incredible 15 rider battle for the points positions eventually won by Australian 15-year-old Harrison Voight over Italian 16-year-old Luca Lunetta.

“I am really so happy with everything. So far this weekend has been perfect, it’s my first time here, I love the track, I took pole and then the race win.”
“I was confident going into the race, I felt I had a little bit over the others and that if I pushed from the start I could get away.”
“I wanted to get clear before the tyres lost some performance and that is what happened after about 8 laps. By then I had a good advantage, the tyres were sliding but it was quite predictable and I enjoyed that too.”
“I’m not going to change anything for tomorrow, I will try and do the same thing if I can.”

Voight made the move at the right time

“I’m pretty happy with that one. It’s quite emotional, I’m a bit speechless at the moment. Very happy to come back from injury and get a result like that.”
“I made a bad start, I tried to push hard but had so many big moments, honestly I nearly crashed a couple of times.”
“I thought, ‘come on, just bring it home, learn from the group.’ Then I noticed during the race everyone started struggling with the temperature. I felt that my tyre wasn’t too bad, especially on the brakes.”
“I saw that into Turn 1 they all slowed up a lot and there was a big gap and I realised that I could make a good pass and I passed a load of kids.”
“On the last lap I passed Lunetta because I knew it was best to be in front.”
“We’ll have a look at changing the suspension for tomorrow but at the moment I’m not sure.”

Lunetta in the heat of the battle

“I loved it today, it was such a fun race and I really enjoy the track. It is so great to be on the podium again.”
“It was so hot out there, really hard for everyone but I managed the tyre so that they went the distance without too much trouble. We had close battles all the way, it got really close at times but we love that.”
“I have to say thank you to my family and everyone who supports me. The bike was great, we will not change anything for tomorrow.”

“It was a great race, the start wasn’t perfect,” explained the 17-year-old Dutchman. “I dropped back a bit but then I got a bit of pace and tried to move up. Mid race I caught the group and tried to get to the front, my gearing was quite long and I wasn’t getting into 6th.”
“My bike wasn’t feeling powerful and it was difficult but I managed to get some good points.”
“We’ll change the gearing and try to make things better for tomorrow.”

“I didn’t get a very good start and didn’t get past many guys on the first lap,” explained the 14-year-old Irishman after a crash on the first lap of Qualifying left him starting from the back of the grid. “Everyone told me to take it easy and I did, just going forward one by one.”
“I got to the front group and then people started to battle with me and I wasn’t going forwards.”
“Then with 5 laps to go I really went for it and down the waterfall into the left hander I braked really late and went round the outside of 4 people.”
“Then on the last lap into the first corner, I was catching on Arbi and he was going in so fast I had to do everything to stop the bike. I could see them two were about to crash and I just managed to stop the bike, I was all over the place. Then it was me and Farioli battling for the last lap.”
“I think the way I did it today was good and I need to do the same tomorrow, we’ll go longer on the gearing because in the big group I was revving out at the bottom of the hill.”

Eddie O’Shea knocked out of a podium place

“One of the best races of the season so far, on a par with Mugello and to have such a good race end like that in the way that it did on the last lap is really gutting for me,” stated the British 15-year-old who was knocked off at the first corner on the lat lap.
“I really feel that I’ve stepped up to the point that I have the pace to run at the front and even win a race and it’s really tough to be knocked off like that.”
“In the beginning the tyres felt really good, I remember seeing 11 laps to go and I thought it was time to push. But then the performance really dropped and kept going down. I could see all the groups lap times going and I could see it was the same for everyone.”
“I’m looking forward to Race 2, the bike felt perfect, it has all weekend. We made some big changes in FP2 but after that it’s been brilliant.”

“I’m not very happy and a bit angry,” said the 14-year-old Spaniard who finished 12th after having his late race plan thwarted. “I wanted to do like Jerez, keeping something in the tyres for the last laps. I was P6 and going to push but Eddie O’Shea and Aditama crashed and I had to brake because I saw the bikes flying and a lot of people overtook me.”
“So I couldn’t gain any positions, I hope we can do better tomorrow, the bike is good we will not change anything.”