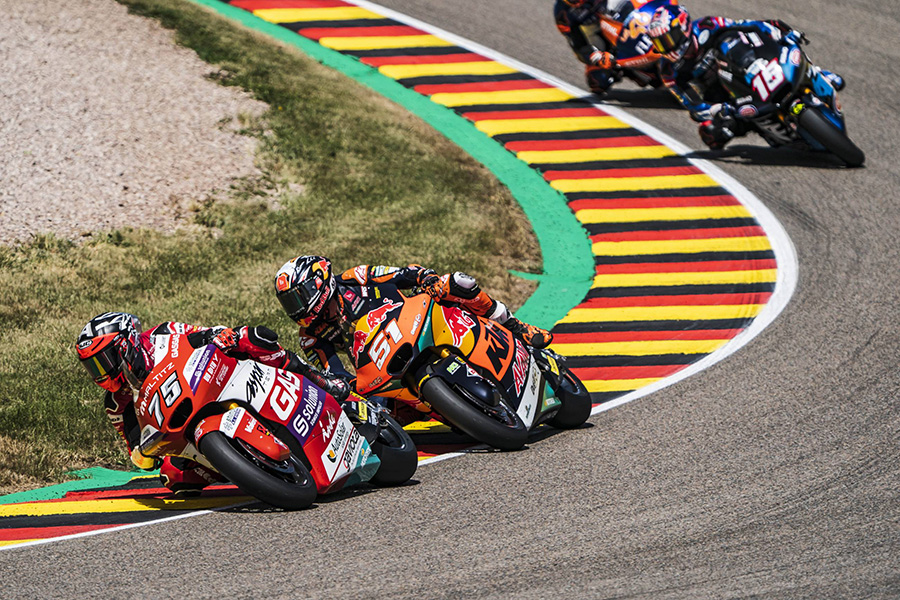 The GASGAS Aspar Team rider Albert Arenas continues his progression in the intermediate category and at the German Grand Prix he achieved his best result in a Moto2 race. Arenas was sixth, less than four seconds off the podium, after having achieved yesterday also his best position on the grid. The GASGAS Aspar Team rider has fought with riders like Pedro Acosta, Sam Lowes or Marcel Schrotter, but he was not entirely comfortable with the tyres and was unable to put up a fight in the final laps.

His teammate Jake Dixon, who set the fourth fastest time in qualifying, went into the race still in pain after yesterday’s crash and was unable to keep up with the riders in front. Dixon dropped some positions and finished eleventh after suffering a slight vibration on his bike throughout the race. With these results, Jake Dixon enters the top 10 of the category again, while Albert Arenas climbs to the 12+1 position.

6th Albert Arenas (+11.635):
“A great weekend and I‘m very happy with our work done here at the Sachsenring. The race went quite well – top six – but it was a hard and I suffered, especially with the tyres. I learnt a lot. We’ll keep working towards Assen. We know about some of the difficulty we’ve had since Barcelona and if we keep pushing with the solution then we’ll be even further forward. It will be a short week, so we’ll get home, rest, train and hope for more in Holland and the second half of the season. Thanks to the guys for everything this weekend: we worked really well.”

11th Jake Dixon (+18.553):
“I didn’t feel too bad on the bike but I struggled in the race. For some reason I did not have the grip I had all weekend and had a strange vibration. I don’t normally go backwards but today that happened and I had to salvage what I could. I bullied the riders around me for that position and did the best I could do. Thanks to the team. We obviously want more.”