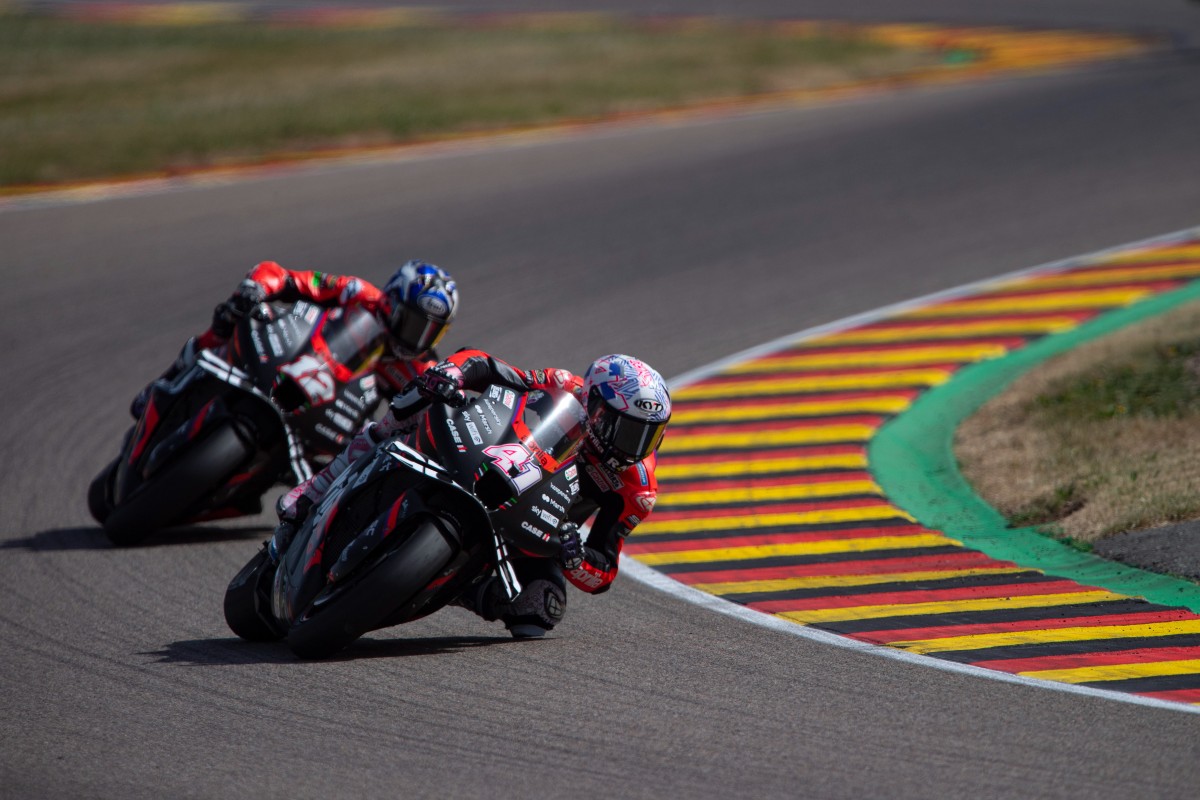 It was expected to be a battle of nerves and it lived up to expectations. The blazing German asphalt of the Sachsenring hosted a tactical race where the riders had to deal with never before seen conditions for this circuit.

Constantly battling with grip, Aleix fended off Miller’s attacks throughout the race until a few laps from the end, with nerves of steel on braking sections despite a less than perfect feeling with the front end. The only thing that kept him from yet another well-deserved podium finish was a late braking move on turn one that made him go wide and threw him off his line. Today’s fourth place in no way diminishes Espargaró’s run for the championship, where he is still solidly in second place overall.

Maverick also rode a brilliant race, starting from the ninth spot on the grid and extremely incisive in the first stage of the race with clean and decisive overtaking and a very fast pace. This was partially due to the choice of the medium tyre on the rear, a solution that Maverick preferred and intended to manage all the way to the chequered flag. Only a technical problem with rear height device on the nineteenth lap halted what had been an outstanding race up to that point for him.

The collateral damage of this circumstance is that Aprilia lost the lead in the teams championship, but the Italian team has their sights set on taking it back as early as next weekend in Assen.

Unfortunately today I had a strange vibration at the front from the first lap which then got progressively worse. At a certain point of the race, I had to slow the pace, changing my riding style and not exploiting the RS-GP’s strong points. It’s a pity because, even though I wouldn’t have been able to keep up with Fabio, I definitely had the pace to battle with Zarco. With the way things went, I’m pleased with fourth because in spite of riding badly and without confidence, I was still able to limit the damage. I’m not too worried about the lost points; right now, Fabio’s form in the race is what should be pushing us to find more speed.

I had fun today. I started well, coming through the first corner without losing positions, and then I was able to be aggressive, overtaking until catching up with Aleix. At that point, I caught my breath, knowing that the final laps would have been difficult, so I was saving my strength and the tyre. I don’t know if I would have been able to overtake Aleix but, continuing at that pace, I would have tried. It’s a shame about the problem with the height device. Unfortunately, there was nothing I could do, so I preferred boxing so I wouldn’t be a danger to other riders. In any case, I’m happy. Our improvement curve is consistent and I feel like I’m close to the turning point of the season.

#GermanGP
Get All Our Latest News Sent Direct To Your Inbox
Join 30,253 other subscribers.
Follow on Social Media
Get the VROOM Podcast
Download our Vroom.GP App