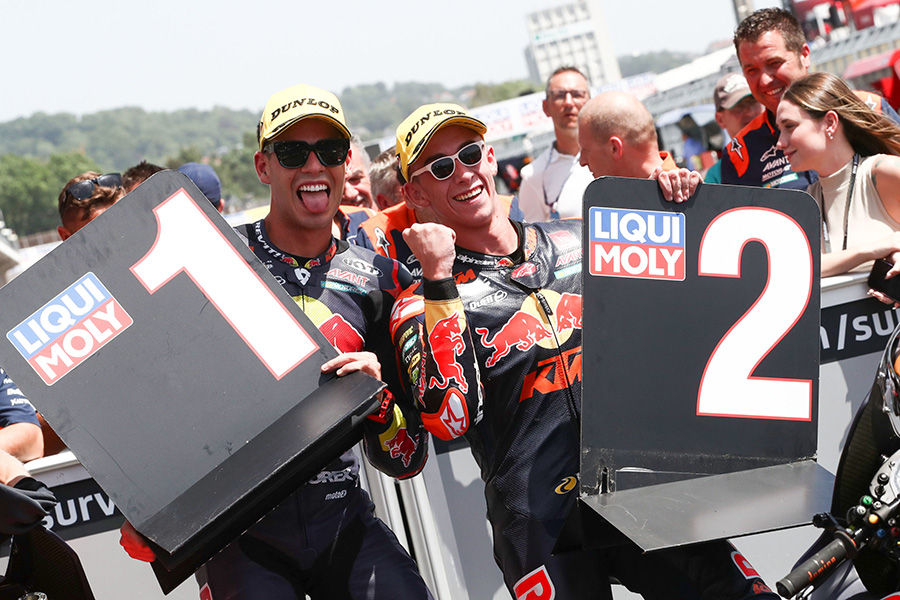 Red Bull KTM Ajo Moto2 had a great race at the German Grand Prix, claiming a one-two finish with Augusto Fernandez and Pedro Acosta first and second, respectively. The duo shine amidst the intense heat that only added to the difficulty of the task at hand.

Fernandez started from the front row of the grid, and after six laps the Red Bull KTM Ajo Moto2 rider snatched the lead and began to establish a pace far superior to that of his rivals. On his own for the rest of the contest, he took the chequered flag more than seven seconds ahead of his teammate, taking his second victory of the season – and the fifth of his career.

Acosta was further back down the order, on the fourth row, but was comfortable from the get-go. He moved up into the Top 5 on the early laps, set a good pace and continued his steady climb, slotting into second place and trying to close the gap to his teammate. Acosta came home in second, earning a second podium of his rookie season in Moto2.

Fernandez is third in the overall standings with 121 points, whilst Acosta is eighth with 75 points. The Dutch GP is the next round of the Moto2 World Championship, taking place from June 23rd-26th.

#37 AUGUSTO FERNANDEZ
“It was a very long race and I kept up a pace that I’m happy with. It was 28 laps but I managed it well. I kept up a pace that I was comfortable with, but the track was very tough in terms of grip, so you couldn’t relax at any time. I’m very happy with this victory and with the important points that we got for the title fight. Now it’s time to focus on the next race.”

#51 PEDRO ACOSTA
“It was a difficult race from the start, because we took off from the fourth row. We needed to push a little harder at the start, but nevertheless we have to be happy with the job that we did. We’ve taken a step forward because we were able to manage the race. We calmly controlled the situation to be at the front and get this result today.”