Brad Binder 7th and Miguel Oliveira 9th at the Sachsenring 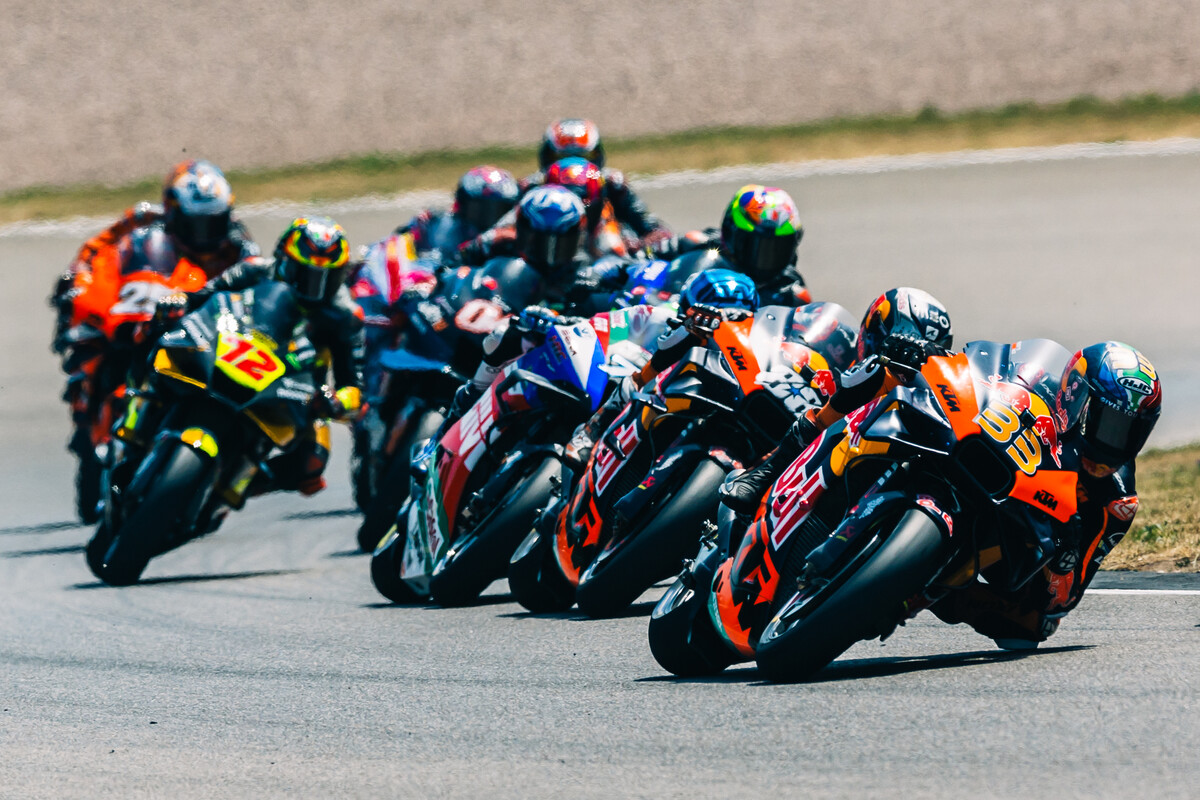 The gradients and varying curves of the Sachsenring welcomed back MotoGP fans for the first time since 2019 and hot summer weather forged a memorable 24th visit to the circuit located a short distance west of Dresden and Chemnitz. The grandstands and banking were loaded with 232,000 appreciative spectators for the latest episode of the unpredictable racing series.

The short 3.7km layout produced incredibly close lap-times with up to 20 riders separated by less than a second in Free Practice. Red Bull KTM Factory Racing filled slots on the fifth row of the grid while Tech3 KTM Factory Racing began Sunday’s affair from slightly further back. The 30 circulations represented the highest quantity of laps at any track this season and the tight nature of Sachsenring meant that overtaking was a tricky task. A decent start was essential and in this respect Binder gained three positions on the first lap. The South African then kept pushing through the field. In the early stages he had Miguel Oliveira for company.

Air temperatures breached 30 degrees and created demanding conditions for the riders but also the machinery. Binder progressed up to 7th and was just seven seconds away from the podium. It was his fourth consecutive top ten. Oliveira was 9th and comfortably ahead of 2022 race victor Enea Bastianini.

Binder is 5th in the Riders world championship while Oliveira is 10th. Red Bull KTM Factory Racing sit 5th from 12 in the Teams championship standings and KTM are 4th in the Manufacturers’ table.

From one historic circuit to another: MotoGP next attempts the fast and flowing layout of the TT Circuit Assen in the Netherlands for round eleven next weekend.

Brad Binder:
“It’s a been a long weekend for us here. He tried to be competitive over one lap but it’s been really difficult to get in the top ten. In Warm-up this morning I managed to push all the way consistently and could find my pace and all my marks. My goal today was to make sure I finished the race so I’m happy that I could give all I have. We take home a 7th and I expected better at one point but I didn’t have anything left with the rear tire. We just have to keep working. Next week at Assen is a completely different track with different conditions. I hope it will suit us better.”

Miguel Oliveira:
“The race was hot, difficult and super-long. We didn’t get the best start and I think that limited the result by the end. The day was determined by missing out on Q2; that was the weekend there. We showed a lot of speed in terms of race pace but couldn’t quite replicate it for the position that we want. We leave Sachsenring with another 9th place. Consistent but not a place to be super-happy about.”