British Talent Cup: Garness hits back after another twist at Knockhill 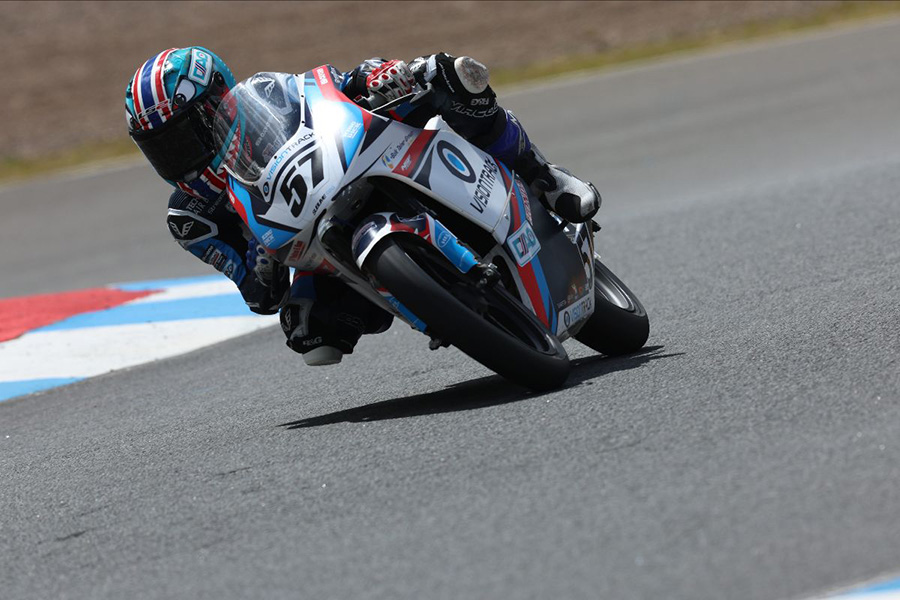 Johnny Garness (MLav VisionTrack Academy) enjoyed a redemptive Race 2 at Knockhill as the number 57 returned to the top step, bouncing back from a crash out the lead on Saturday. The drama was instead reserved for Sullivan Mounsey (Wilson Racing/J&S Accessories) and Evan Belford (City Lifting by RS Racing), with the former crashing out and collecting the latter. Carter Brown (MLav VisionTrack Academy) came through to take second, just pipping Troy Jeffrey (ThorneyCroft56 Racing) at the line.

The early stages saw a three-rider fight as Mounsey took off, Garness then took over and Belford was once again on podium-fighting form. No one was able to pull away, but the drama hit on Lap 7 as Mounsey overcooked it, lost control and as he went down, made contact with Belford. The number 52 tumbled with him into the gravel, riders ok but leaving Garness with more than three seconds in hand.

That was a comparable gap to the one he enjoyed on Saturday before sliding out, but this time there were no such dramas. The number 57 kept it pinned to take another win and extend his points lead, bouncing back in style.

Brown, meanwhile, was locked in a duel with Jeffrey. The number 21 impressed again but just lost out, the two crossing the line spit by little but with Brown ahead to limit the damage in the standings, losing only five points to Garness.

Kiyano Veijer (Microlise Cresswell Racing) beat teammate Harrison Dessoy to fourth, ahead of Rhys Stephenson (Rocket Racing) and another small gap back to Bailey Stuart-Campbell (Team 151s/Lextek). Harrison Crosby (Rocket Racing) got the better of Lucas Brown (SP125/Amphibian Scaffolding) in a close finish between the two.

That’s a wrap on Knockhill, and now it’s time for some summer break before the field returns at Brands Hatch in July.

knockhill
Get All Our Latest News Sent Direct To Your Inbox
Join 30,271 other subscribers.
Follow on Social Media
Get the VROOM Podcast