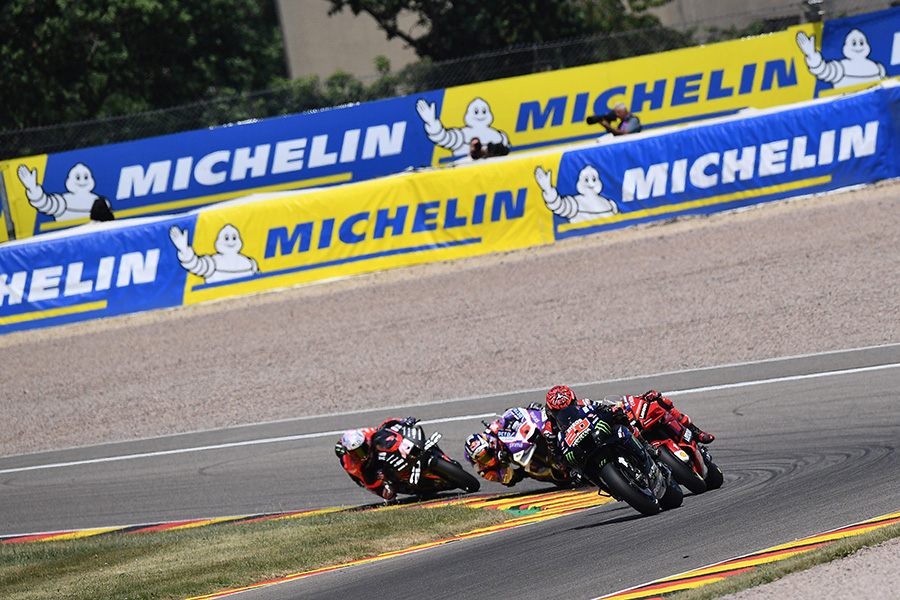 Fabio Quartararo rode a textbook race and endured the very high temperatures of a Europe-wide heatwave, to win the Liqui Moly Motorrad Grand Prix Deutschland at the Sachsenring, in Germany. Hot on his heels was fellow Frenchman Johann Zarco (Prima Pramac Racing), who crossed the line in second place, with Jack Miller (Ducati Lenovo Team) taking the final step on the podium in third.

With temperatures gradually increasing during the weekend and peaking for the race on Sunday afternoon at around 51° C, the race tyre choice was almost unanimous, with Hard compound tyres at both the front and rear to counter the temperature and stresses exerted on the left-hand side of the tyres by this unique track layout. The only exceptions were Bastianini with the Medium front, and Pol Espargaro, Mir and Quartararo who opted for the Medium rear.

Temperatures at the Sachsenring started off relatively normal on Friday with track temperatures peaking at 45° C during the afternoon. During Free Practice sessions 1 and 2, the riders started to get to grips with the circuit and work on dry set-up and test the MICHELIN Power Slick allocation. The pace in FP2 was as hot as the weather forecast, with Bagnaia breaking Marc Marquez’s 2019 all-time circuit lap record with a new best lap time of 1’20.018 using Medium front and Soft rear tyres.

Higher temperatures on Saturday saw the riders pushing hard during FP3 to make best use of the relatively cooler morning temperatures and set a lap time to get into the top 10 for direct access to Q2. Bagnaia continued where he left off on Friday by beating his new lap record with a first ever sub-1’20 lap of the circuit, setting a new record of 1’19.765, again using Medium front and Soft rear MICHELIN Power slicks. In FP4 the higher temperatures led to reduced grip levels on the track and caused difficulties for some of the riders.

In Q2, Bagnaia posted the fastest lap of the session to take pole, with Quartararo and Zarco completing the front row of the grid in second and third places respectively.

Speaking after the race, Piero Taramasso, Michelin Two Wheel Motorsport Manager, said: “Although this is the shortest track on the MotoGP calendar, it is still very challenging due to its layout with so much time spent on the left side of the tyres. Based on our experience here last year we tweaked our 2022 allocation slightly by increasing the hardness of the Soft and Medium front compounds, and we also brought slightly softer rear compounds across the board, compared to last year.

“However, the temperatures this year were much higher than usual, which negatively affected the grip levels available from the track, but despite this the tyres performed very well overall – giving consistent grip levels, and therefore confidence to the riders. This was highlighted by the first ever sub-1’20 lap time set by Pecco in FP3. In addition, the performance was accessible to all riders and teams with the top 20 riders in FP3 separated by just 9/10ths of a second.”

#GermanGP, michelin
Get All Our Latest News Sent Direct To Your Inbox
Join 30,242 other subscribers.
Follow on Social Media
Get the VROOM Podcast