Izan Guevara 1st and Sergio Garcia 3rd at the #GermanGP 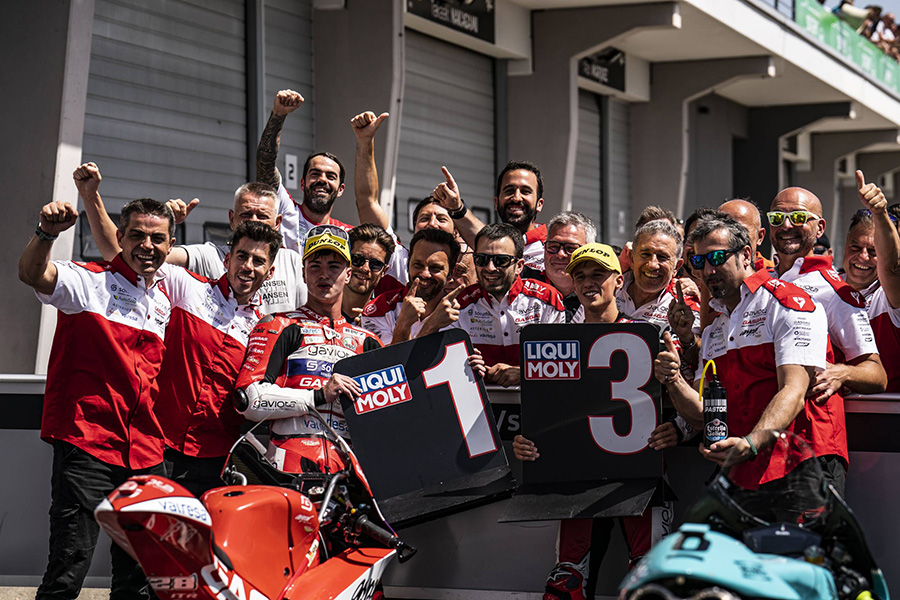 The GASGAS Aspar Team rider Izan Guevara has finished his best weekend in the World Championship with an overwhelming victory over his rivals. If winning a race in Moto3 is complicated, doing it with a 4.8-second advantage is a feat within the reach of few. The Spanish rider already showed his great pace during practice and in the race he only had to wait nine laps to open a gap of one second over his pursuers and go solo towards victory. Guevara did not even need to set the fastest lap of the race: the regularity of his pace has allowed him to keep getting away from them and cross the finish line alone, fourteen days after the triumph in Barcelona. This is also Izan Guevara’s third victory this season, the sixth for the team in ten races.

His teammate Sergio García Dols started from the third row of the grid, but through the first corner he has already passed in sixth position. From there, and with patience, he has worked with the leading group, staying third behind Dennis Foggia from the second third of the race, until in the penultimate corner, where he has been able to overtake him. However, the Italian returned the overtaking in the last corner and left him third, 111 thousandths behind. With these results, Sergio García Dols remains the leader of the category, although he sees his advantage reduced to 7 points over Izan Guevara.

VICTORY Izan Guevara:
“It was a great victory. We knew we had the pace but I didn’t think I could run away that much and win by more than four seconds. We have been very constant. It was very hot, but I didn’t want to think about how many laps were left. I just kept pushing, but when I had a bit of a margin I started to control, until the end of the race. It is our fifth consecutive podium, the second victory, and if we continue like this, many more will come.”

3rd Sergio García Dols (+0.757):
“It was a difficult weekend for me, I didn’t have a good feeling, but I gave everything to be as far ahead as possible. The race had a very high pace, but I knew how to hold on. I tried to overtake Foggia in the penultimate corner, but we had nothing left today.”

#GermanGP
Get All Our Latest News Sent Direct To Your Inbox
Join 30,246 other subscribers.
Follow on Social Media
Get the VROOM Podcast