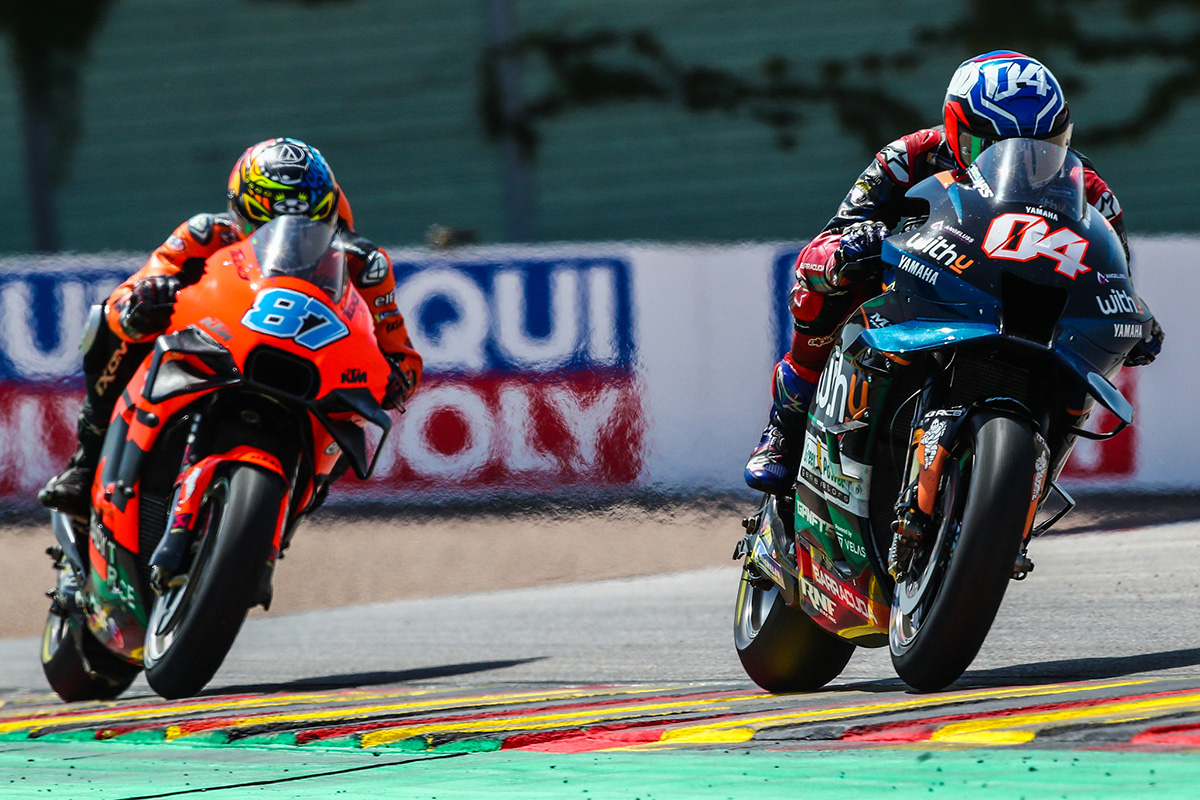 With 232,202 spectators, the German Grand Prix reached a new record. Also, in terms of temperature the Sachsenring was nearly unbeaten so far as the 30 laps race at the unique circuit was held in scorching hot conditions.

Thereby, WithU Yamaha RNF MotoGP Team’s Andrea Dovizioso grit his teeth for the entire race. The Italian started from P19 and made up one position already in lap one. Step by step, he found his way towards the points scoring position, although he was not feeling fully fit, which means the high temperatures have been even more tough for Dovizioso. Yet, he managed to reach P15 around half distance of the race and made up another place with three laps to go. He eventually saw the chequered flag in 14th, scoring two points and equaling his second-best result of the season so far.

On the other hand, Darryn Binder came into the 10th round of the 2022 MotoGP World Championship with a lot of optimism. After he delivered some great races lately, he was confident to be able to bring home another decent result, although he was starting from the back of the grid. Once again, the South African delivered a rocket start to make up four positions in sector one, but had to step back a bit and was in P22 at the end of the first lap and made up position by position in the initial laps, until he unfortunately lost the front at the end of lap five and had to end the German Grand Prix prematurely.

Yet, both, Dovizioso and Binder will have another chance to score in just a few day’s time during the Dutch GP in Assen next weekend ahead of a well-deserved summer break.

“I was sick these last two days, so I didn’t expect a lot, also because Sachsenring is one of the most demanding tracks as you have to stay always on the left side of the bike for a long time. But at the end, I was quite consistent. I was struggling a bit with the front pressure, I think something strange happened there, because from the first lap to the last lap the pressure increased a lot, too much. We have to understand now, if this is coming from our garage and if we have to do something different or if it’s coming from the tyre. Anyway, I wanted to fight with Franky (Morbidelli), in the end I couldn’t stay with him, but I was very close, so it was ok.”

“Luckily I’m all good. It started off quite alright, I got quite a good jump off the line, but unfortunately, the first lap was a bit messy. I was going wide in turn three and ended up back in 23rd. Lap by lap I was picking up the guys one at a time, I think I came back to 18th in lap five and I finally got a bit of breathing room to push a bit to catch up to the guys in front of me. I was giving it a little bit of a push, but unfortunately, I just lost the front into the last corner and went down.”